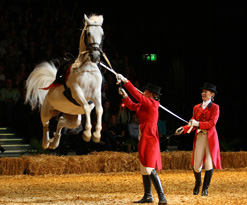 The Lipizzaner: from skilled warhorse to
Baroque dancer. Favory Presciana
performs the Capriole. 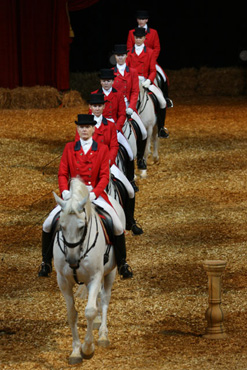 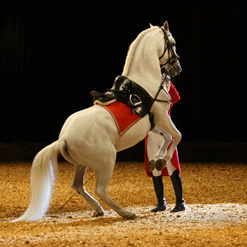 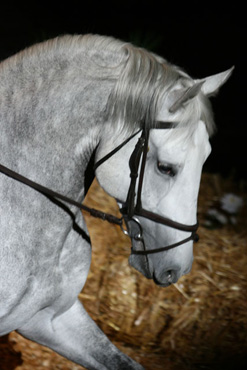 The dancing white stallions of Kyalami are the only recognised proponents, outside of Austria, of the spectacular art of high school dressage performed at the Spanish Riding School of Vienna. They perform regularly on Sunday mornings at their base near Johannesburg all through the year, except when they are on tour.

Recently, they spent a week in Cape Town, putting on five performances at Grand West Casino. More than 8000 people flocked to the Grand Arena over the four days to watch the discipline, the dedication and the incredible power and grace of these phenomenal horses. And how they got to the southern tip of Africa is a fascinating story.

The breed dates back to the seventh century, originating in Spain where native horses were interbred with North African Barbs brought by the Moors when they expanded into Europe.

The result was the Andalusian, a horse particularly well-suited to war, being strong, calm, tractable and courageous. Towards the end of the 16th century the Hapsburg emperor Maximillian II established a stud for these sought-after horses at Kladrub in Austria, while his brother, Archduke Charles II, set up a similar one at Lipizza, now Lipica.

Here that the Andalusians were interbred with native Karst horses, Neapolitans from Italy, and other Spanish breeds to eventually produce the horse we know today as the Lipizzaner.

Like their forebears the Andelusians, Lipizzaners were war horses, and were taught a range of difficult skills that gave them an advantage on the battle-field in the heyday of cavalry. These included changing direction rapidly and surely at the merest suggestion of a leg or hand aid from their rider. They could stand up on their hind legs on command, so the rider could scan the battlefield. Most impressive of all, they could, if surrounded by infantry, leap into the air, kicking back to scatter hapless foot soldiers.

The art of training war horses in these and other manoeuvres developed into the discipline of dressage, now an Olympic sport and far removed from its military origins.

The emergence of the Lipizzaner breed coincided with the Baroque era, characterised by a love of elaborate embellishment and flamboyant opulence. Music, dance, fashion, art and architecture all took a turn for the lavish, and ostentation was de rigueur.

In these sumptuous times those martial skills were turned to a less bellicose purpose, and it became quite the thing to have magnificently turned out white war horses dancing to the music of the day.

This fashion culminated in the establishment of the Spanish Riding School in Vienna – so named because Lipizzaners were still called Spanish Horses. The school was housed in the elaborate Winter Riding School, designed by renowned Baroque architect Joseph Emanuel Fischer von Erlach. It took six years to build and was completed in 1735.

But Europe has not always been a peaceful place, and the last two centuries have not gone smoothly for the dancing white horses. During the Napoleonic wars of the late 1700s they were moved three times, and even briefly captured by Napoleon. They were moved again in the First World War, after which they were divided between Italy and Austria.

But it was during the Second World War that they faced their biggest threat. Trapped between the advancing Russians, the retreating Germans and half the starving peasantry of Europe, the horses were in serious danger of landing up in the camp kitchen of one army or another. That would have been a sad and strangely ironic ending for the perfect war horse – fed to the troops at the end of the era of mounted warfare.

Luckily US General George S Patton, a skilled equestrian who had competed in the first modern pentathlon at the 1912 Olympics in Stockholm, was persuaded to use his troops and equipment to rescue the Lipizzaners.

It was one of those amazing coincidences. Alois Podhajsky, director of the Spanish Riding School, had competed against Paton in the Olympics. Knowing the general was a keen equestrian, Podhajsky invited him to a private Lipizzaner performance.

After that, Paton had no choice. He had to do whatever he could to ensure the horses’ survival.

The story of the rescue was immortalised in Disney’s 1963 movie The Miracle of the White Stallions. Interestingly, the brightly coloured Baroque red uniforms that the Lipizzaner riders wear in South Africa were inspired by the movie.

Disney Studios decided that the drab brown uniforms of the Spanish Riding School were too dull for the production so they got their wardrobe people to run up something a little more cheerful. And the tradition continues in South Africa.

After the Second World War Count Elemer Jankovich-Besan, who had owned a Lipizzaner stud in Hungary, moved to South Africa with what was left of his breeding stock, settling in Mooi River in what is today the KwaZulu-Natal Midlands.

In 1951, at the Royal Agricultural Show in Pietermaritzburg, Jankovich-Besan met a Polish immigrant, a retired cavalry officer called George Iwanowski. He gave him a horse to train, and it wasn’t long before Iwanowski hit on the idea of establishing a team of performing horses similar to those in Vienna.

He bought some land in Kyalami, and started recruiting prospective riders in the early 1960s. It’s hard work riding and training horses at that level, and it takes up a large part of the day. Also – there was no pay, and he realised he was going to struggle to find men of the right calibre.

So he recruited a group of women riders. That doesn’t sound at all strange today, but then it was a daring idea, especially as all the riders at the Spanish Riding School were men – and most ex-military. It was only in 2008 that the first two female riders joined the team in Vienna.

So the perfectionist ex-military cavalry officer started training his band of ladies, who juggled a rigorous riding and training schedule with keeping house, ferrying children to and from school and generally holding the domestic fort together. Yet all the horses used in the performance are stallions. The mares are all barefoot and pregnant back at the stud farm, which has since been moved to near Hartebeespoort Dam.

Iwanowski was a hard taskmaster, but according to veteran Lipizzaner rider and trainer Gill Meyer, who rode with the team from 1962 to 1993, “he was always the perfect gentleman, always meticulously dressed, and scrupulously punctual”.

Those early days were hard. They travelled everywhere by train, and money was always tight. Meyer describes a previous trip to Cape Town in the 1970s. The horses were stabled at Kenilworth Race Course, and the performances were at Maynardville, in Wynberg. Just before they were due to leave for the evening performance, the horse truck broke down.

Undaunted, Iwanowski ordered them to mount up, in their full Baroque costumes of red tailcoats and top hats, and they rode to Maynardville through the streets of Cape Town.

Dancing for their supper

The Lipizzaner show is more organised today, but money remains tight. In fact, the South African Lipizzaners went through another rescue recently – this time financial. In January 2008 the Lipizzaner Centre was due to close due to a serious lack of funds, but four enterprising horse lovers bit the proverbial financial bullet and took over the whole operation.

Nearly a year later they are servicing, and slowly reducing, the debt they inherited, and the beautiful white stallions continue to dance for their supper. As well as the weekly Kyalami performances, they’ve done 26 shows at the Gold Reef City entertainment complex in Johannesburg, a number of smaller performances, and corporate events.

A highlight of the year was a performance to mark their 60th anniversary – at the Royal Agricultural Show in Pietermaritzburg, where Elemer Jankovich-Besan first met George Iwanowski. Here they were accompanied by those other masters of survival – the Soweto String Quartet.

They’ve also performed with the Drakensberg Boys Choir, and the trip to Cape Town was part of their mission to do enough performances to keep them going. While they do get some funding from the Friends of the Lipizzaner, they must perform to earn their keep. It’s not cheap feeding all those hungry mouths – there’s a reason for the cliché “eats like a horse”.

It took 21 hours to drive from Johannesburg to Cape Town, and it’s not restful. The horses have to concentrate to keep their balance the whole time, so they were pretty tired when they arrived at their new home – a small, temporary stable yard built in the parking lot at Grand West.

That was the easy part, though. The hard part about performing indoors is the surface. Grand West’s Grand Arena, which has seen more superstars than superstuds, has a cement floor, which is clearly not a good base for leaping and jumping into the air – well not for a horse, anyway.

So Grand West called in Ann Dalton, events manager for AgriExpo. As well as building the temporary stable yard, she had to plan and build an arena with a safe surface for the horses.

Singer Helmut Lotti finished his last performance on the Sunday night, immediately after which the Grand West team cleared the arena and flew the lights for the Lipizzaner event, finishing at 7:30am on Monday. At 8am Dalton and her team moved in. They recoated the floor with 288 cubic metres of laterite clay mixed with 500 bags of wood shavings, to provide a non-slip surface with some give.

The horses arrived at lunch time on the Tuesday for their first rehearsal, which doubled as a leg stretch after the long journey, and performed on the completed arena surface at 6pm that night. The arena needs to be remixed with a rotovator every morning to maintain its spring, and then it’s ironed flat by a huge steel I-beam pulled by a tractor.

It’s hard work, but it’s worth it. When the lights dim and the spotlights focus on the entrance through the enormous red velvet curtains, a hush falls.

Then the music starts, and the magnificent white horses prance in – tails held high, dancing, and incredibly light on their feet for such powerful animals. They move like a coiled spring, as they prance on the spot, in a slow but controlled piaff, and seem to float on the air in an extended trot, with their perfect hooves barely touching the ground.

And then they leap in the air, defying gravity, revelling in their power and grace. They seem to lap up the applause, acknowledging it with the merest flick of a forelock. The consummate professionals – war horses, remodelled into dancers. 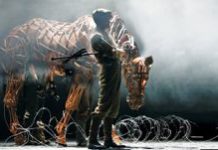 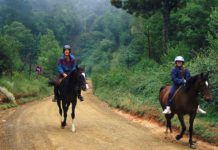 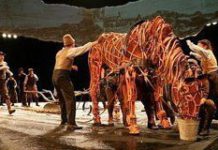 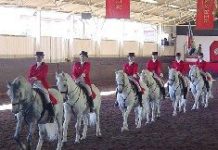