Nelson Mandela’s old room at Liliesleaf.
He lived on the farm under the false
identity of David Motsamayi, the
caretaker of the property.
(Image: liliesleaf.co.za) 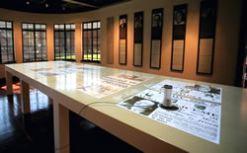 Liliesleaf farm, situated in what is today
the upmarket suburb of Rivonia, north of
Johannesburg, was considered the nerve
centre of the liberation struggle.
(Image: gautengcc.co.za)

Liliesleaf farm in Johannesburg – the site of the infamous raid in 1963 that led to the Rivonia treason trial in which top African National Congress (ANC) leaders were tried for sabotage – brings to life the memories, fascinating stories and events of a turning point in South Africa’s history.

Denis Goldberg, member of the ANC’s armed wing Umkhonto we Sizwe, clearly recollects the day when the raid on Liliesleaf took place.

In a recent filmed interview, Goldberg says he remembers how he felt at that moment when the security police swooped on the farmhouse on 11 July 1963; it was a cold winter’s day, and he says that at that moment it suddenly got “even colder”.

Perhaps one of the reasons why Liliesleaf captures the imagination of so many people is because it is a place of memory, legacy and inspiration.

“It’s keeping the memory and legacy alive of a particular time in South Africa’s history and ensuring that this story is told,” says Nicholas Wolpe, CEO of the Liliesleaf Trust.

Through stories such as the one told by Goldberg, visitors get a revealing glimpse into the lives of the freedom fighters who candidly speak about their personal struggles, memories of Liliesleaf and their contribution to building a democratic South Africa.

More than a historical site

Liliesleaf farm, situated in what is today the upmarket suburb of Rivonia, north of Johannesburg, was considered the nerve centre of the liberation struggle.

Arthur Goldreich, a member of the South African Communist Party, and his family fronted as the white owners of Liliesleaf farm, while the thatched cottage and outbuildings were used to conceal underground activities.

The farm was a secret meeting place for top ANC and Communist Party leaders and it is here that Umkhonto we Sizwe was founded. It was also a hideout of former South African president Nelson Mandela, who lived on the farm under the false identity of David Motsamayi, the caretaker of the property.

The raid on Liliesleaf uncovered extensive incriminating evidence that was used by the police to cement their case against several ANC members.

Among the most important finds were journals and diary entries written by Mandela, discovered in the coal bunker outside the main house. Operation Mayibuye, the plan which outlined how the resistance movement intended to overthrow the apartheid regime, was also discovered on the farm.

“It is a site of immense significance,” says Wolpe.

Through the establishment of the Liliesleaf Trust and Legacy Project, the site has been restored, preserved and developed into one of South Africa’s most prominent liberation landmarks.

About 60% of the building infrastructure consists of original brickwork. During the excavation process, more than seven different types of brickface were uncovered and any post-1963 brick was discarded.

This brickwork was used in the restoration of the historical buildings and structures, which today constitute the museum component of Liliesleaf, a project which began in mid-2004.

A visit to Liliesleaf is much more than a dry history lesson. The interactive displays and beautifully restored buildings tell the story of commitment, dedication and selfless sacrifice of many people who fought for freedom from an oppressive apartheid government.

A key component of the Liliesleaf Legacy Project has been the interviewing of numerous individuals linked to Liliesleaf, to build-up a comprehensive audiovisual archive of the farm’s history.

The interactive tour takes visitors on a journey, retracing the footsteps of prominent anti-apartheid activists who spent time on the farm.

At each point in the tour, visitors have an opportunity to experience a first-hand account of the events and circumstances leading up to the raid of the Rivonia farm, through interviews with struggle veterans.

In the manor house, a large 3D interactive table allows visitors to pull up videos, images, audio and text about the farm’s history, using two aluminium navigator orbs. Tour guide Zein Khumalo says the table is the only one of its kind in the world.

The electronically-controlled cabinet of curiosity holds an account of each event that culminated in the Rivonia trial. As each cabinet is pulled out, the accounts are automatically read out.

A telephone rings in the corner of one of the manor house’s rooms – it’s one of those old bulky black phones with a dial, and on picking up the receiver, the telephone plays recorded stories of spy agents, terrorists and infiltrators.

The award-winning touch screen technology, telephone stories, sparse furnishings and dark rooms convey the sense of secrecy, fear and tension that the struggle leaders must have lived with every day.

In search of a historical artefact

It has been 40 years since the raid took place, yet Liliesleaf remains a living monument to the fight for freedom in South Africa.

According to Wolpe, the vision for Liliesleaf Farm took root after a Rivonia trialists’ reunion on the site in 2001. This led to the farm being re-purchased and its original structures were uncovered by archaeological diggings.

But after all the excavations, one important item is still missing – the search for Mandela’s highly prized Russian Makarov pistol is still on.

Although it was reportedly only buried about 20 paces from the farmhouse kitchen, an extensive search still hasn’t delivered the artefact, now valued at about R22-million (US$3-million).

The semi-automatic pistol is believed to be the first weapon of the war against apartheid. It was given to the young Nelson Mandela in 1962 by Colonel Biru Tadesse of the Ethiopian Riot Battalion in Addis Ababa, when Mandela was on a trip to seek military assistance.

Mandela hid the pistol, and 200 rounds of ammunition, in a pit deep enough so that a plough could not uncover it, near an oak tree on the farm. At the time he hoped to retrieve it soon, but he never got the chance. A few weeks after he buried the firearm he was arrested and imprisoned.

The 93-year-old Mandela can no longer remember the details of where he buried the sought-after weapon.

As the search for the valuable firearm continues – and Wolpe thinks that renewed efforts will be successful – the Liliesleaf museum remains an important part of South Africa’s history.

“Liliesleaf is our connection to South Africa’s past, a link to the present and a bridge to the future,” he says.

What makes a visit to Liliesleaf worthwhile is that the individual memories of the struggle are conveyed by people who were actually there.

It represents the beliefs, inspiration and aspirations of a fearless group of leaders who were committed to bringing about socio-political transformation based on democratic principles.

“It is important that the memory and legacy of South Africa’s struggle for freedom is preserved in the hearts and minds of all South Africans,” he says.