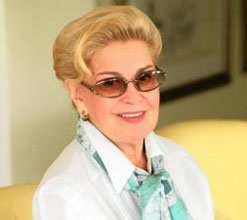 Brickhill was the epitome of glamour for over a decade as the star of a series of Minstrel and Follies Extravaganzas. She went on to enjoy her greatest triumphs as Miss Hannigan in Annie, and in the title roles in Hello Dolly! and Mame.
(Image: Facebook.com/brickhill.burke)

The stage lights have dimmed with the death of South African theatre doyenne Joan Brickhill, at the age of 89. She passed away in a frail care facility in Johannesburg on Wednesday, 15 January.

Brickhill, who first astounded audiences at the age of two, was a consummate all-round performer and professional with skills in an array of disciplines, from costume design to casting, from performance to production. Born in KwaZulu-Natal in 1924, Brickhill was an actress who took her art to radio, theatre, television, and film. Unparalleled in the country, her formidable career spanned over 60 years, and her list of stage and screen performances is astonishingly long. Her passion for the spotlight, applause from the audience and dedicated love for her craft made her one of the most talented and respected South African performers of the twentieth century.

The dominant force in musical theatre for over 20 years, Brickhill and her husband, Louis Burke, formed Brickhill-Burke Productions and staged a prolific series of long-running and outstanding productions from the mid-1960s to the 1980s. They produced Meet Me in St Louis on Broadway, Oklahoma!, A Midsummer Night’s Dream, The Miser, The Dark of the Moon, Rashomon, The Beggar’s Opera, The Minstrel Scandals, and The Owl and the Pussycat, to name a few.

Brickhill was the epitome of glamour for over a decade as the star of a series of Minstrel and Follies Extravaganzas. She went on to enjoy her greatest triumphs as Miss Hannigan in Annie, and in the title roles in Hello Dolly! and Mame. The grand theatre productions were staged in His Majesty’s Theatre, in Johannesburg.

In 1978, the theatre was financially crippled and was on the verge of closing down. Brickhill and Burke orchestrated a heroic battle but sadly, His Majesty’s was finally closed in 1981, with the couple’s production of Hello Dolly! ending its illustrious career. Brickhill was committed to the sanctity of the theatre space and went beyond the stage to save it. In front of the curtain and behind the scenes she did everything she could to ensure this beautifully ornate establishment remained open.

Besides her bold love of the theatre and stage, Brickhill was an avid, passionate campaigner during the devastating scourge of Aids in the 1980s. She was a staunch supporter and patron of SA Artists Fight against Aids and was the first patron of Fight against Aids Campaign.

Wanting to pass on her knowledge and love to others, the Brickhill Burke School of Speech and Drama was opened in Durban in the late 1950s. The couple felt uniquely gifted and proud that they were the discoverers and mentors of young talent.

After many successful, dramatic years together they divorced; Brickhill returned to Durban, where she taught and directed productions, and Burke left for New York in the mid-1990s.

Known as a triple threat – a singing, dancing and acting performer – Brickhill could illuminate the stage and guarantee sold out houses. She was equally as successful as a producer and director, and will always be remembered as that rare phenomenon, the all-round genuine theatre star. She was also an executive entertainment producer at Sun City.

Brickhill’s first feature film was Nor the Moon by Night in 1958, in which she played Harriet Carver, the lead role. Her next celluloid outing was Follow That Rainbow in 1979. Along with Burke, she directed and presented the first South African play in KwaZulu-Natal to be performed to multi-racial audiences. It later toured the country.

As a toddler, the child star gleefully walked away with the “most talented child in the country” award and through the years her honours were many: twice winner of the Best Radio Actress; twice winner of Best Performance in Musical; nominated for a Tony Award on Broadway for her choreography in Meet Me In St Louis; the original musical Meropa – KwaZulu played the Royal Command Performance before Queen Elizabeth II during its long run in London; the University of Tshwane bestowed an honorary doctorate on her; and, she received a Lifetime Achievement Award from South African Theatre Management. There is also a rose named in honour of the actress, a delicate medium yellow hybrid tea called the Joan Brickhill Rose.

After a lifetime in the light, the theatre finally went dark this week.