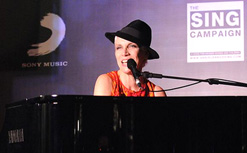 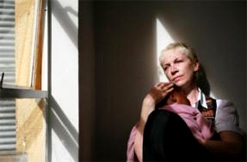 During a visit to the Bethany Children’s
home in Lusikisiki in the Eastern Cape,
one of the children fell asleep in Lennox’s
arms.
(Image: Sing)

Renowned international pop star Annie Lennox is set to dazzle fans during a one-night performance in Johannesburg, to raise funds for her HIV/Aids charity organisation, Sing.

Lennox’s concert, An Evening with Annie Lennox – Unplugged, in Concert and in Conversation, will take place on 8 July at the upmarket Teatro at Montecasino, one of South Africa’s premier casino and entertainment venues.

The musician’s repertoire for the evening will include songs from her new compilation of hits, The Annie Lennox Collection, which features songs recorded throughout her music career.

For this special performance, Lennox has waived her fee and will donate all the proceeds to her charity.

Tickets for the once-off concert were selling at R1 000 (US$125) each, with organisers announcing that the performance is already sold out.

On her blog Lennox shares her excitement about her upcoming visit: “I’m going to South Africa … AT LAST! I would have been there last year if it hadn’t been for the issue with my back/foot.”

Fame for a good cause

The journey for Lennox, which resulted in the formation of Sing, started when she was invited in 2003, to take part in the inaugural 46664 concert in Cape Town.

On her website, Lennox writes that it was during this visit and her interaction with Nelson Mandela that inspired her to start her charity work. “Several years ago I personally witnessed Nelson Mandela, standing in front of his former prison cell on Robben Island, addressing the world’s press.

“His message was that the pandemic of HIV/Aids in Africa was in fact, a genocide. Since that time I resolved to do as much as I can to bring attention to the HIV/Aids crisis.”

Lennox continued with her work as a 46664 ambassador, and has since performed at two other 46664 concerts .

Former President Nelson Mandela formed the 46664 campaign to raise global awareness of the scourge of HIV/Aids in Africa. 46664 was Mandela’s prison number on Robben Island, where he was imprisoned for several years.

He decided to use his prison number as symbol of hope, as opposed to a symbol of oppression that it once represented.

As to why she decided to name the organisation Sing, Lennox says during her many visits to South Africa; she learned that music and singing was an intricate part of the country’s culture. “South Africa has a tradition of activist songs and singing, as a way to create solidarity and communicate messages.

“When people get together to sing, they become encouraged and inspired. In the words of Nelson Mandela: ‘Let us use the universal language of music, to sing out our message around the world’.”

Sing’s resources are mainly used to help women and children infected and affected by the pandemic.

In conjunction with South African Aids lobby group the Treatment Action Campaign (TAC), Sing provided a grant of R3.9-million ($491 000) over a period of three years to conduct programmes which include; helping South Africans access HIV testing and treatment, educating the public about HIV/Aids and preventing further transmission.

Part of the work that TAC is involved in includes advocacy for women’s rights, lobbying pharmaceutical companies and the government on the cost of medicine and its Aids policies.

For the love of it

Scottish-born Annie Lennox is celebrated as one of the most successful pop artists alive.

After touring the world in the late 1970s with the group The Tourists, Lennox and fellow band member, Dave Stewart went on to form the rock/pop band Eurythmics in 1980, during which Lennox gained most of her initial success as a musician.

It was Eurythmics’ second album Sweet Dreams (are made of this), which catapulted the duo into worldwide success.

After they were thrust into the limelight, the duo went on to tour incessantly, selling over 75-million albums and achieving more than 20 recognised hits across the world.

In 1989, after much success, Lennox and Stewart amicably agreed it was time to pursue solo careers.

Lennox’s first album Diva debuted at number one on the UK pop charts and sold about six-million albums around the world.

The versatile singer has toured with the much-acclaimed singer Sting, and together they performed 52 concerts throughout the United States and Canada.

At was also during this time, that Lennox started her philanthropy work.

Since her involvement with Sing, Lennox has been vocal about a number of international issues concerning the scourge of HIV/Aids.

In May this year, Lennox criticised Pope Benedict XVI for the comments he allegedly made in Angola during his multi-stop visit to African countries.

Lennox was livid that the pontiff had spoken against the use of condoms, and rather called for abstinence as the preferred form of curbing transmissions.

“If there was ever an example of irresponsibility, it’s the Pope going to a country like Angola, where people are dying … because of unprotected sex, and telling them they should carry on or that they should abstain. What planet is this person on?” she was quoted saying by the Australian newspaper, Herald Sun.

Although Lennox was quick to point out her respect for the Catholic church, she did however feel that the Pope missed an opportunity as an influential leader of sending out the right message about HIV/Aids.

In November 2008, Lennox was presented with the Award for Merit at the 36th American Music Award in the US.

She was presented the award by US pop singer Justin Timberlake, who also paid tribute to her philanthropy work.

“She’s been an activist for just causes all over the world, mostly in silent ways that you’ve never even heard about. She does this from her heart, motivated purely by love.”