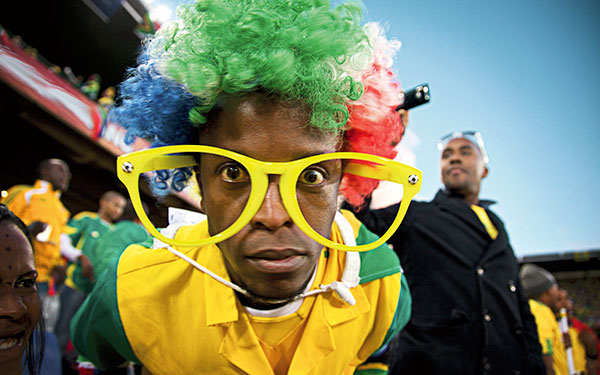 • When football became Africa’s game
• Africa Cup of Nations: some facts and figures
• Who will become a star at Afcon 2015?
• African footballers call on their juju men
• A brief history of Bafana Bafana

South Africa is a football-loving nation with one of the best leagues in Africa and a club tradition going back over a century. Over all those years the country has developed a rich lingo to describe the game, the teams and the play on the field.

As the continent comes together for the 2015 Africa Cup of Nations in Equatorial Guinea this month, we bring you an insider’s guide to the unique language of South African football fans.

First up is of course Bafana Bafana, the nickname of the national football squad. In isiZulu it means “the boys, the boys”, or “go boys, go boys”, and it comes directly from the fans. In July 1992, as South Africa returned to the global footballing fraternity after decades of exclusion under apartheid, the national side was on the verge of beating Cameroon at King’s Park Stadium in Durban. The excited crowd spontaneously began shouting “bafana, bafana” to cheer them on – and the name stuck. Doctor Khumalo scored the game’s only goal to give South Africa a 1-0 win.

Football itself is known as iDiski.

A familiar sight in stadiums is fans wearing a makarapa, a modified and elaborately decorated plastic miners’ helmet. Anything goes on a makarapa: the colours of the supporter’s team, goat horns, bells, bicycle horns … 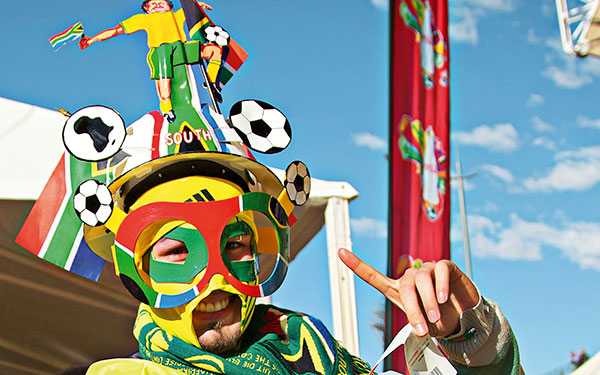 A fan wearing a makarapa decorated in Bafana Bafana colours.

The stadium precinct on match day buzzes with a distinctive sound: the blaring of the vuvuzela. A large and colourful plastic trumpet that sounds like a foghorn, the vuvuzela is much loved by local football fans – and, after the 2010 Fifa World Cup in South Africa, much hated by the rest of the world. (A single vuvuzela is apparently louder than a chainsaw.) The trumpet remains a must-have accessory at any South African football match. 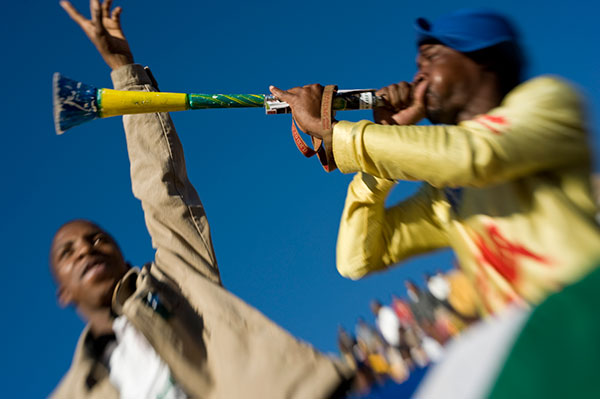 The sound of the vuvuzela is synonymous with South African football.

When a goal is scored, supporters and TV commentators celebrate with the shout of laduma – isiZulu for “it thunders”.

There is nothing like seeing a skilful player pull a shibobo on an opponent. Literally it means nutmeg, but it refers to passing the ball between the opponent’s legs.

During his career South African footballing legend Jomo Sono perfected the art of the banana kick, a skilful corner shot that curves right into the goal.

In South Africa there are few players able to kick a bazooka, a thunderous shot for goal. Orlando Pirates FC player Thabo Matlaba is one of those few.

The show me your number move has embarrassed many, when a player fakes a cross or shoot and then player turns away from his opponent to show his jersey number.