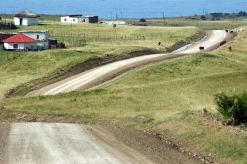 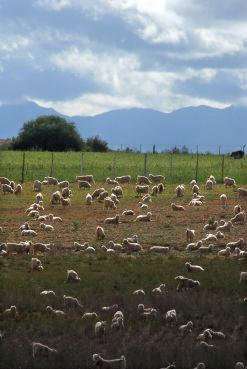 Mohair-producing Angora goats on a farm near Oudtshoorn in the Western Cape. 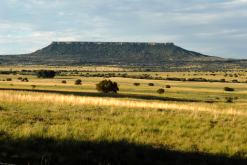 A flat-topped mesa in the Koranna Mountains in the Eastern Free State.
(Images: MediaClubSouthAfrica.com. For more free images visit the image library)


A group of French and South African photographers are embarking on a photo shoot of a different kind. They are travelling across the country to gather images that capture what South Africans think about issues around land, ownership and belonging.

The travelling photography initiative, known as the Social Landscape Project, is using the visual medium of photography to start a conversation about these important issues.

“With this project we want to show that photography has social relevance, it is not just an aesthetic project,” says Molemo Moiloa, the manager for public programmes and development at the Market Photo Workshop.

Land has always been an emotive and complex issue in South Africa. During apartheid, forced removals, land dispossession and the establishment of homelands displaced many people. More recently issues surrounding land reform, mining, housing and service delivery have also been very contentious.

But South Africans also have positive associations with land such as security, belonging and memory.

“We want to stimulate conversation about how we as South Africans think about land, our associations with it and how we relate to it,” says Moiloa.

The Social Landscape project is a collaborative effort between the Market Photo Workshop, a photography school, and the Rencontres d’Arles photography festival in France.

The photography project is one of the flagship events of the 2012/2013 France – South Africa Seasons cultural exchange.

Twelve French and South African photographers will travel across the country for a period of three months, stopping over at selected sites in different provinces.

He has been behind the lens for more than 50 years and helped to select sites with historical, socio-political, economic and environmental relevance.

The photographers will work in and around Johannesburg, in various parts of KwaZulu-Natal, Kimberley in the Northern Cape, Magopa in the North West province, and the Karoo.

“We wanted to find off the beaten track stories and places to document using photography,” Moiloa explains.

The project also doesn’t shy away from controversial locations, such as Magopa in the Rustenburg area, near where the now infamous Marikana mining incident broke out.

An Eastern Cape photographer, Cedric Nunn, will focus on the Grahamstown and Hogsback region where the historical Xhosa British wars occurred.

The Social Landscape project isn’t only about the professional photographs. Community participation, through the public engagement component of the project, is an important aspect of the initiative.

The public are invited to submit their own snapshots through social media platforms such as Facebook and Twitter, to show how they perceive issues of land and belonging.

“Photography is the most accessible medium to capture these stories,” Moiloa says.

“So many people have access to photography. Anyone with a cell phone can take a photo and the project wants to engage people’s own photographic ability. “

This is why the initiative also has such a prominent social media presence. “It is one of best ways to ensure that people see the images,” she says.

The travelling photography project is about more than taking pretty pictures. It can play an important unifying role in South Africa, bring about healing, encourage reconciliation and change perceptions around the sensitive issue of land.

“The visual medium is accessible and goes beyond any language,” says Moiloa. “It is open to interpretation and that is what makes photography such an amazing medium to communicate meaning.”

The Social Landscape Project also includes a training and research programme, two publications and an archive, and will end with a public engagement exhibition.

The exhibition will take place at the Market Photo Workshop premises in Newtown, Johannesburg, on 24 November, where different panels covering media, literature, photography and art will discuss issues around landscape photography.

“The publications will be a fundamental addition to landscape photography in South Africa,” Moiloa says.

The research component is ideal for people who are interested in landscape photography history and it will cover issues such as memory and land, or how the Truth and Reconciliation Commission serves as memory in oral form and how photographers engage with that.

Some of the most powerful memories of South Africa’s history have been captured in a few iconic images that have become known worldwide.

This photography initiative will deliver a new collection of images that celebrate South Africa’s history of landscape photography, and produce an important archive of one of the country’s most important challenges.