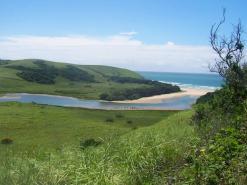 The Cwebe Nature Reserve, on the
Eastern Cape’s Wild Coast, is one of
the province’s natural attractions.
(Image: Eastern Cape Parks) 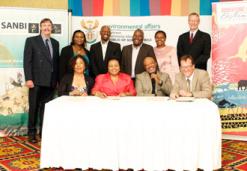 Dignitaries sign a memorandum of
understanding between Sanbi and
the Eastern Cape Parks and Tourism
Agency, as part of the commitment to
establish two new botanical gardens in
the province.
(Image: Sanbi)

Kwelera lies just north of East London, between the coastal towns of Gonubie and Queensbury.

The announcement has been met with praise and approval, with the interim CEO of the Eastern Cape Tourism and Parks Agency (ECTPA), Sybert Liebenberg, describing it as “an absolute winner for the province”.

While this is the province’s first national botanical garden, it will join nine others already established around the country.

They include the Walter Sisulu, west of Johannesburg and famous for its nesting pair of Verreaux’s or black eagles; the stark but beautiful Karoo Desert in the Western Cape; and the world-famous Kirstenbosch on the Cape peninsula, which was the first botanic garden to be devoted to a country’s indigenous flora.

The Kwelera reserve is currently managed by the provincial parks authority, but in future will be co-managed by the South African National Biodiversity Institute (Sanbi), which cares for the country’s botanical gardens.

Environmental affairs minister Edna Molewa said in a statement that the botanical garden will be established in two phases.

Phase one sees the official proclamation of the existing reserve as the Kwelera National Botanical Garden, while the second phase will involve the expansion of the existing facility onto adjacent land that will be bought during the 2012/2013 financial period.

Under the international definition system relating to botanical gardens, Kweleza will be classified as a conservation garden, said Molewa, who has committed to the creation of two new national botanical gardens by 2014.

“The role of botanical gardens in the provision and maintenance of ecosystem goods and services, thereby ensuring sustainable livelihoods, cannot be underestimated,” she said.

“The establishment of the tenth national botanical garden is a major achievement in reaching the country’s conservation targets, ensuring ecological sustainability.”

It is also hoped that Kweleza will boost tourism in the area, and help in educating residents of the region in the importance of conservation.

The establishment of the other botanical garden in the Nelson Mandela metro area’s Port Elizabeth is also in progress. The development will encompass St George’s and Victoria parks in the city, as well as the 80ha Settlers’ Park, and Dodd’s Farm to the west of Settlers in the Baakens River Valley.

The 23km-long Baakens River meanders through Port Elizabeth and joins the sea just north of the harbour. It is considered one of the city’s most precious greenbelt areas.

At the announcement in 2011, Mandela Bay councillor Noluthando Mapu said that the various parks will have different focus areas. She said that St George’s will focus on plants from around South Africa and Victoria on endangered and vulnerable species.

Settlers will be home to plants found naturally in the region and Dodd’s Farm will continue to be a recreation hub, with picnic, cycling and hiking facilities.

Visitors will connect to the four areas via an eco-friendly transport system – the use of golf carts has been proposed.

The development will create jobs for local people and will also address a number of security concerns, as the botanical garden will be fenced off and patrolled.

In 2011 Sanbi, during a presentation in Port Elizabeth, mentioned a figure of R10-billion (US$1.3-billion) a year as the total economic value of the Cape Floristic Region, the world’s smallest but richest floral kingdom and a proclaimed Unesco World Heritage Site.

The Nelson Mandela Bay Municipality is part of this floral treasure, forming its western border. Most of the kingdom is covered with the indigenous vegetation known as fynbos, and of its 9 600 plant species, 70% grow only in this little part of the planet.