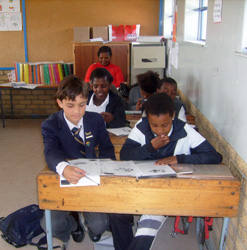 Boys taking part in the exchange
programme get a chance to attend a
school that is very different to their own. 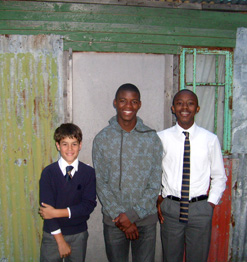 “I went from a 10-roomed house in Rondebosch to a three-roomed house in Khayelitsha,” said Jem Wilson, one of a group of children from an elite Cape Town primary school who took part in a unique life-skills initiative.

The Luleka Exchange Programme, set up over eight years ago, gives boys from Rondebosch Preparatory School in the upmarket Cape Town suburb of Rondebosch and boys from the no-fees state-run Luleka Primary School in Khayelitsha township a chance to spend a day in each others shoes.

“Going to Luleka has really opened my eyes to seeing how differently people live,” Jem said.

Rondebosch and Khayelitsha are very different places. The former is a residential suburb in the south of Cape Town city centre, nestling below Devil’s Peak and near the main campus of the University of Cape Town. Khayelitsha, on the other hand, is a sprawling semi-informal settlement on the wide plains of the Cape Flats, far from the affluence of the city.

The exchange, held in mid-September, kicked off with children and teachers from both schools having an evening get-together at Rondebosch Prep to break the ice. That night each of the Rondebosch kids hosted one of the Khayelitsha boys at their home. The next day the boys from Luleka Primary spent the day at Rondebosch Prep, after which they all left for Khayelitsha.

The process was then repeated, with each Khayelitsha boy hosting one Rondebosch boy at their home for the night. The following day the Rondebosch pupils attended Luleka Primary School.

Jordan Corfe from Rondebosch Prep was anxious about spending the night in Khayelitsha.

“We hear all these horror stories about Khayelitsha, but when I started talking and walking around I soon got the feel of the place,” he said.

His schoolmates also quickly learned that the township was not as bad as they had believed. “I didn’t expect that my perception of Khayelitsha was so wrong,” said Daniel Jollivet de Oliviera. “I thought that the crime would be worse than where I live, but our hosts have never been robbed before and they keep their doors open with confidence.

“I was surprised at how [many] people my host knew. It seemed as if the whole family lived there, including aunties, cousins and grandparents. It is very community-based.

“The Luleka exchange was an awesome experience.”

Chris Verster, a teacher at Rondebosch Prep, said the programme is an extension of existing exchange initiatives at the school. “Our aim was for our boys to experience and understand a little bit of another culture,” he said. “We do a lot of interaction with other ‘of our own’ schools as well as two exchanges abroad, in England and Wales.

“We hope for our boys to realise that there are other diverse cultures on our doorstep, that contribute to all of us being South African.”

She hopes the exchange will help break what she calls, “the cycle of inferiority, and the race barrier”. She believes that despite 15 years of democracy many black people, especially children in townships, still live with the misconception that white people are better and smarter. The exchange showed that that the children from Khayelitsha never expected to have so much in common with kids from a privileged neighborhood.

“It was good to see that he showed respect to my parents,” said Luleka pupil Pabotse Lefatsa of his guest from Rondebosch. “You don’t always expect that from a white person.”

Although the boys from both schools discovered they had much more in common than they expected, their experience of education was something else.

“The boys from Khayelitsha were amazed by the technology at the school, especially the overhead projectors, and also by the sizes of the classrooms,” said Rondebosch pupil Michael Palframan.

Describing Luleka Primary, Jett Rogerson from Rondebosch Prep said: “Their school was very different to ours. The teachers did not seem to care what the pupils did. We could walk around outside, you could throw things, and nothing happened. There was little discipline.”

Andile Mamfengu from Khayelitsha said of Rondebosch Prep said: “The school was great, they have good discipline and the classes are also smaller. We have 40 kids in a class, they have only 20.”

Verster said the two schools cannot really be compared. “We depend nearly entirely on parents’ school fees. Luleka is a no-fees school. The education department supply schools for basic education; we strive to maintain a school of excellence.”

Nonetheless, both groups of boys agreed that the experience had taught them that their differences were mainly on the surface. Behind the privilege and the poverty they are much the same – for the most part, overcoming language and cultural barriers was as easy as grabbing a football.

More than that, it broadened their view of human experience. As Rondebosch Prep pupil Michael Palframan said, “I thought this was Cape Town, but it is not. There is a whole other world out there.”