The amazing Keiskamma Guernica is a
lament for those who have suffered and
died in South Africa’s Aids epidemic. 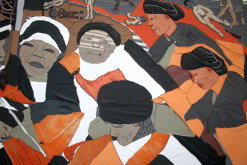 The little fishing hamlet of Hamburg, situated in the Keiskamma River estuary in the Eastern Cape, is known not just for its bounty of local fish and its beautiful countryside.

It is in this sleepy village that one of the most beautiful artistic interpretations of Guernica, Pablo Picasso’s compelling anti-war work, was created by 50 local Xhosa women.

Referred to as the Keiskamma Guernica, the tapestry is, on first appearances and certainly in size, an almost exact copy of the original work, but for one significant difference.

The black, white and grey monotones of Picasso’s 3.5m x 7.8m oil on canvas piece are said to reflect newspaper print. This is the medium through which the artist first heard of the bombing of the quiet Basque village of Guernica by German and Italian warplanes in 1937.

But the greys, blacks and browns of the Keiskamma Guernica are formed entirely from hand-made felt, skirts of traditional Xhosa women from the area, and the blankets of Aids patients who have stayed at the Umtha Welanga Treatment Centre nearby.

The Keiskamma Guernica was first exhibited to critical acclaim at the 2010 National Arts Festival in Grahamstown, where funding was also secured for the project. It has since found a home in New Brighton at the Nelson Mandela Bay Municipalitywhere it can be seen in the entrance hall of the new Red Location library.

The women are currently making a smaller version of the tapestry, which will go on permanent exhibition in the Johannesburg Art Gallery in 2012.

The original Guernica hangs in the Reina Sofía in Madrid, Spain’s national museum of modern art.

Unlike Picasso’s symbolism which he pointedly refused to interpret, the Keiskamma work deliberately incorporates a number of elements important to the Xhosa culture, explains Dr Carol Hofmeyr, Keiskamma Trust founder and director.

“We tried to make the whole piece specifically Xhosa-related,” says Hofmeyr. “The link of cattle to the ceremonies of the Xhosa culture is very strong.”

The mother with the adult child on her lap refers to Michelangelo’s Pïeta, while Hofmeyr herself makes an appearance in the tapestry as the woman in white.

And while Picasso’s sun probably relates to his obsession with “the sick sun” which he refers to constantly in his poetry after the bombing, the sun in the tapestry is similarly poorly, made from scrap material.

By contrast, the birds at the top of the tapestry are unique to the Keiskamma work, brought in “as a symbol of hope”.

And while the depictions in Picasso’s work protest at the horrors of the aftermath of war, each stitch in the Keiskamma work remembers the relentless onslaught of the Aids epidemic, a seemingly unstoppable disease.

Hofmeyr first came up with the tapestry idea while working in local clinics in the area. By then she had already created the Keiskamma trust and through it, was involved in a number of community upliftment projects.

She remembers thinking about creating a tapestry of Guernica in 2009 after being confronted on a daily basis by the devastation wrought by the HIV/Aids virus and compounded by the country’s ailing medical system.

“The composition of Picasso’s work is very strong. His work was an expression of outrage, particularly of the suffering caused to innocent individuals.” The overall message of the work rang true for Hofmeyr who was seeing similar situations of suffering unfolding in front of her eyes.

“While acknowledgement of HIV/Aids is widespread and accepted, the devastation and the suffering of the innocent victims of the disease, who are often left to their own devices, goes unrecorded,” says Hofmeyr.

The Keiskamma Guernica tapestry is an expression of that outrage from the community, she says, adding that over time the original idea of embroidery as a means for job creation also became a wonderful tool for psycho-social healing.

“We tried to make the making of the work a process of mourning. We talked about loss, about how to deal with it and how to express it. There is so much pain in these families.”

Hofmeyr and her husband, who is also a doctor, first moved to the area in 2000 with the intention of venturing into art and enjoying the peaceful environment.

Writing on the Keiskamma website, she recalls the establishment of the trust: “I was confronted by the poverty in this community and it became impossible to enjoy the beauty of the place without in some way addressing this. So I embarked on a journey that began as an insignificant embroidery project.”

Today, the Keiskamma Trust is recognised as a successful and thriving social upliftment project, an NGO which not only provides a source of income, but more importantly, hope to the inhabitants of the area. The trust has also branched out into education and training for adults and children, and runs a successful music academy.

“It could have failed or remained small and manageable but it was miraculously successful,” says Hofmeyr.

Early on, Hofmeyr realised the need for an aggressive anti-retroviral roll-out approach, as well as medical and palliative care for very sick Aids patients. This resulted in the creation of the Umtha Welanga health care centre which provides full-time monitoring and care to very ill patients, especially in the early stages of treatment when complications are likely.

Community involvement plays a strong role, as Hofmeyr has learnt that the successful provision of HIV care depends on suitably trained care workers.

“The centre is a place where people can learn to follow the complicated drug regimens in a supportive and nurturing environment.”

The tapestry hangs in the entrance of the Parliament building in Cape Town, and relates the often turbulent history of the Cape frontier region, from the Stone Age San people all the way through to the 1994 democratic elections.

Another magnificent Keiskamma piece is the local interpretation of the famous Issenheimer altarpiece. The work has travelled extensively overseas and forms part of the travelling exhibition Not Alone, an initiative of Make Art/Stop AIDS.

The original work by Matthias Grünewald was painted in the 16th century for a hospice in Germany, where the inmates were dying of ergot poisoning, at that time a painful and incurable disease.

“In this work, a parallel is drawn between other diseases that seemed hopeless and now no longer exist and this can offer hope to people living with HIV/Aids and indeed to all of us,” notes the website.