The animated 3D Jock is the central
character of the new film.
(Image: Jock Animation) 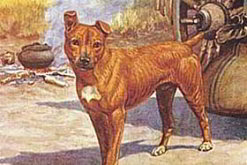 Jock as depicted on the cover of the
classic South African story.
(Image: Kalahari.net) 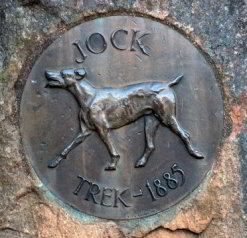 A Jock of the Bushveld route marker,
which leads tourists along the trail
he and Fitzpatrick used to travel.

South Africa’s beloved canine icon Jock of the Bushveld has again been immortalised on film, this time in an animated 3D version which, if director Duncan MacNeillie has his way, is set for international distribution.

MacNeillie will travel to Los Angeles at the end of November 2010 to present the film to Hollywood film studios and independent distributors. With the recent successes of local films such as District 9 and Tsotsi paving the way, he hopes to wrap up an international distribution deal before he returns.

MacNeillie knows Jock well. He directed the first film adaptation of the story, released in 1986 at the height of one of the most turbulent periods in South Africa’s history. It starred Jonathan Rands as Percy Fitzpatrick and boasted a soundtrack, composed by veteran Keith Hutchinson, which featured another South African icon, musician Johnny Clegg.

Clegg’s theme song for the film, Great Heart, has become a national favourite and nowadays is a popular choice for inspiring South African sporting teams to glory. Great Heart does not feature on the new soundtrack, although Clegg is involved.

Because the world was largely boycotting anything South African in the 1980s, overseas audiences were denied the chance to see a film that could hold its own against any Hollywood production of the day.

Determined to see Jock get the global recognition he deserved, MacNeillie decided to try again when the time was right.

Another version was made in 1995, without MacNeillie’s input – this one introduced an American character to enhance its global appeal, and also had a happier ending, which pleased foreign audiences, but didn’t sit well with South African cinemagoers.

A few years ago the director felt that conditions were right for revisiting the story, and set up production company Jock Animation to bring his vision to life.

The animated version follows the same story line as the live motion films, but this time around the animals get to tell the tale.

Animation has given the producers more versatility, and in the new version viewers will get to know Jock’s mother Jess; dainty poodle Polly; Snarly the mongrel, Jock’s rival for Polly’s heart; George the baboon; Pezulu, a noisy rooster; and many more characters.

MacNeillie also approached no less a figure than Archbishop Emeritus Desmond Tutu, asking him to be the voice of the spiritual leader Tata. The Arch agreed and has already recorded his part, as has Adams.

Marius Brouwer, who worked on the official Fifa 2010 World Cup album, composed the score and was in charge of music production until he fell ill in September. Keith Hutchinson has since stepped in to fill the gap.

Adams, Clegg, local songbird Nianell and Craig Hinds of popular rock group Watershed have all worked on individual songs for the film.

Andy Rice, head of the film’s publicity company Jock Marketing, introduced his Oscar-winning brother Sir Tim Rice to the film. The lyricist, famous for his work on The Lion King and Evita, was enchanted by the film, and contributed lyrics to the six main songs on the soundtrack.

Production started in 2007 and is scheduled to wrap in December 2010, followed by the local release in March 2011. This date may change, depending on international distributors.

Those who sobbed into their tissues at the end of the 1986 release will be comforted to know that the new adaptation also has a happier ending, which paves the way for a sequel.

For decades South African children have grown up with the true story of the brave Jock, a Staffordshire bull terrier with the heart of a lion, who roamed the South African bushveld with his owner Sir Percy Fitzpatrick in the late 19th century and became a legend in the process.

Born in King Williams Town in the Eastern Cape, Fitzpatrick was the son of Irish immigrants. His father died in 1880, forcing the young man to abandon his studies to support his mother. The gold rush of the late 19th century was an attractive opportunity, and Fitzpatrick left home in 1884 to seek his fortune in the goldfields of the Eastern Transvaal, now Mpumalanga.

Here he worked as a storeman, journalist and then transport rider, guiding heavily laden ox-wagons along the route from Lydenburg, known today as Mashishing, through Graskop and Barberton, to Lourenço Marques, which is now Maputo in Mozambique.

On a trip in 1885 Fitzpatrick saved the runt of a litter of Staffordshire bull terrier pups from drowning – this little dog was to become his faithful companion and a great hero. The pair’s footsteps can still be traced by following the set of Jock of the Bushveld wayside markers, which are placed along the old Delagoa Bay route used by transport riders. Markers can be seen in places of interest such as Sabie, Pilgrim’s Rest, along the Malelane-Skukuza and Malelane-Crocodile Bridge roads, and Barberton.

Many years later Fitzpatrick entertained his children with bedtime stories of his adventures with the loyal dog, and was eventually inspired to put pen to paper. The book, titled Jock of the Bushveld, was published in 1907 and has not been out of print since.

Fitzpatrick eventually settled in Johannesburg and entered the corporate world, turning later to politics. A spell of activism between careers saw him arrested and tried for treason for his part in the Jameson Raid of 1896, which was meant to incite British expatriates to rise up against the South African Republic government of President Paul Kruger. He was sentenced to two years in prison but was released after just a few months.

He received his knighthood in 1902 while serving as the British government’s official advisor on South African affairs. After the formation of the union of South Africa in 1910, Fitzpatrick became a member of parliament.

He died in Uitenhage in today’s Eastern Cape province and is buried north of the town, near Addo, at a place called the LookOut. The site, which overlooks the Sundays River valley, is a national heritage monument.

To buy Jock of the Bushveld, published by Maskew Miller Longman, go to Kalahari.net.