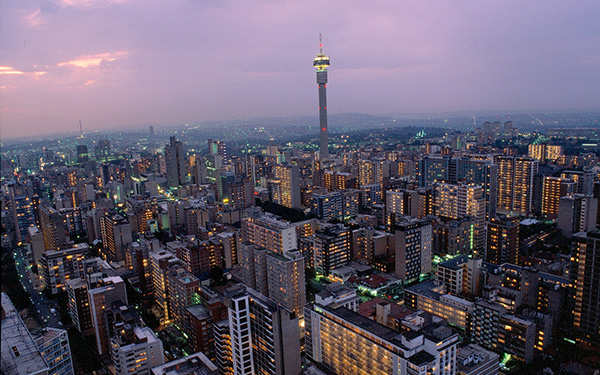 There are 4.5-million stories in Johannesburg, the city of gold. At the Unbelievable Truth you get to hear some of the most entertaining. (Image: Gauteng Film Commission)

To some, Johannesburg is a city of bad role models, unwelcome images and political incorrectness. To its denizens, especially those whose art is informed by this city of gold, it is seemly and human. The Unbelievable Truth, a series of talks by resident Joburg artists, kicks off on 2 October at 42 Stanley Street.

This is an ordinary day at the trendy square of décor shops, artisanal workshops and restaurants, but to Ann Toerien and Rian Malan, each and every one of these people could have a fascinating story to tell.

Today Malan, a journalist and writer, and Toerien, a music expert, are much too busy to pay attention to the conversations going on just outside the glass doors. Inside the sun is not as bright and the silence of the empty room makes it easier to work.

Approached by the organisers of the Joburg City Festival to create an event to celebrate Afrikaans, which would be performed on the fringes of the arts fest, in two short, frenetic days the pair went from the seed of an idea – a literary event similar to London’s 5X15 and New York’s The Moth storytelling events – to roping in poets and musicians in time to meet the programme print deadline.

“Rian suggested something along the lines of The Moth and 5X15, events he took part in. We took that idea, tweaked it, then I called friends and persuaded them to take part,” explains Toerien. The Afrkaans event, Optelverse (Pick-up Poems) challenged poets to write a poem a musician could set to music, and musicians to take an existing poem and set that to music. 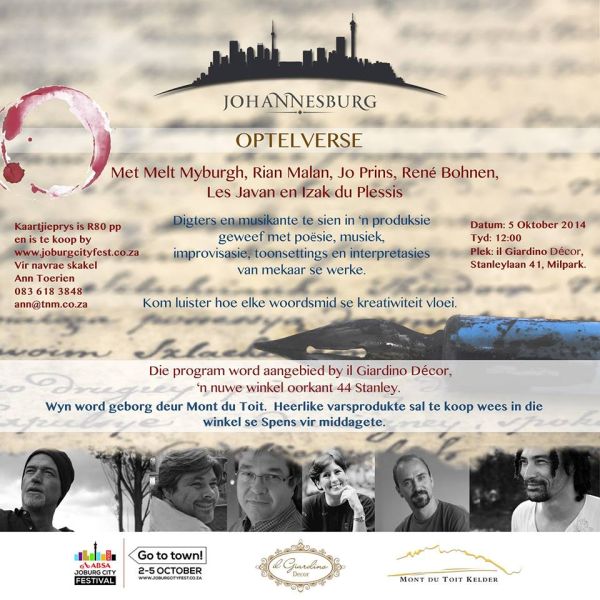 Optelverse celebrates poetry and its ability to give wings to emotion.

This simple premise led to the idea for The Unbelievable Truth, four themed evenings about life in Johannesburg. Speakers have 15 minutes to tell a story about their Johannesburg; themes include male and female experiences of the city, and the city’s influence on South African music. The first evening, on Thursday, October 2, is titled Written in Cement – Joburg Authors Telling Their Stories About Johannesburg.

Writer and journalist Bongani Madondo, appearing on two different nights, will talk about trying to leave the city and being drawn back by its beating creative heart. He will also talk about his crush on Brenda Fassie and how MaBrrr changed South African music forever.

Rob Allingham, former archive manager of Gallo Records, will play his favourite Joburg songs and delve into the history of Boere music and its amazing popularity in Johannesburg in the 1940s, and how Afrikaans musicians like Dawid de Lange could sell a million copies of a single in places like Mozambique. Kleinboer, billed as the Afrikaner Charles Bukowski, will talk about his life in Hillbrow’s seedy underbelly

“Joburg gave birth to characters and cherished them,” Toerien begins. People like Marguerite Albrecht’s grandmother, the Dankie Tannie who ran the Southern Cross Foundation for years. “She bought a coffin on sale and it stood in her parlour for years before it was used.”

Malan once described his candid and unflinching memoir, My Traitor’s Heart, as a love song to South Africa. Malan’s voice is honey and cigarettes and too many late nights. “The great thing about this country, and especially about Joburg, is that our truths annihilate even the strangest fantasies invented in other places. That’s why Joburg can and should become a world capital of story-telling.

Next to him Toerien nods in agreement. The more sensible of the two, it was Toerien who took Malan’s idea, shaped it and breathed life into it. “We wanted to create an event that celebrated all the cultures of this city, all of South Africa. The challenge was finding people who could stand up and entertain, not waffle. And they had to be Joburgers.”

“Storytelling is the new rock n roll,” Malan says, his tone suggesting he might moer anyone brave enough to disagree. “It’s totally democratic, in that anyone can do it. But also elitist, because only some can do it well.  But above all, Unbelievable Truth is about bridging the gaps that still exist between us. The power of stories bringing us to the realization that we are the same, that we were all shaped by this amazing city.” he continues, his words matching the rhythm his fingers drum on to the table top.

He sounds like a true believer, intense and unbending, convinced of his truth. For this reason he is not allowed to speak to the invited artists. “Rian can be,” Toerien pauses, trying to find the perfect adjective, “overwhelming. People are nervous enough without having to deal with him. So I do all the organising.”

Toerien’s earthy, full-blooded laugh is nervous yet confident, poised and hyper all at once.

If The Unbelievable Truth is a success, even a small success, Malan and Toerien are planning monthly evenings where guests can share their stories. Out of this simple premise they want to collect South African stories about loss, love and other impossible pursuits.