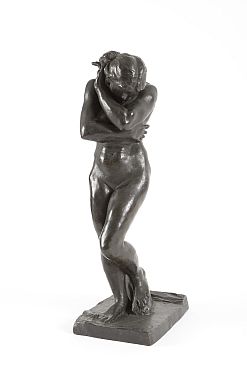 A bronze sculpture of Eve by Auguste
Rodin, created in 1881. The Johannesburg Art Gallery (JAG) is marking 100 years of art-collecting with an elaborate celebration and launch of a new catalogue detailing the various works in its possession.

The event will take place at the gallery in Joubert Park, Johannesburg, on 28 November 2010 at 5pm. The public is welcome to attend and entrance is free.

The catalogue, called One Hundred Years of Collecting: Johannesburg Art Gallery, as well as the launch celebration have been sponsored by the South African division of Anglo American.

The gallery will mark another centenary in 2015, when an upgrade of its building will be completed. The art-collection celebration precedes this, as the establishment began accumulating works long before the actual building was constructed.

The catalogue features essays by South African writers and artists Khwezi Gule, Nessa Leibhammer and Bongi Dhlomo, among others. It has been edited by Jillian Carman, who is an honorary research fellow at the universities of the Witwatersrand and Johannesburg, and a former JAG curator.

“We are celebrating the historic feat by launching a catalogue with essays about collections within the gallery,” said Antoinette Murdoch, the gallery’s curator.

“The individual essays are about the gallery’s traditional, historic and contemporary art collections.

“The launch is an open invitation event and we are expecting close to 600 people,” she added.

“The gallery’s collections have had a significant impact on the local and global art community,” Carman said. “Although initially focusing on western artists, in 1994 a decision was taken to consolidate the South African collections.”

These collections are made up of traditional items, modern and contemporary art – including work by international artists with South African links like Marlene Dumas –and artists from other African countries, like the late Nigerian photographer Oluwarotimi (Rotimi) Fani-Kayode.

“The purpose of this is to build on JAG’s unique strength: it is ideally placed to be a major international centre and archive of South African art within the country,” Carman added.

“JAG is committed to preserving and providing access to our national heritage and giving due recognition to South Africa’s neglected artists through our exhibitions, publications and education programmes,” according to a media statement released by the gallery.

“The gallery is the cultural backbone of Johannesburg and our collection has served to open dialogue and make a path for meaningful, intellectual and academic debate, ultimately contributing to change and impacting on society at large,” the statement continued.

The celebrations on 28 November will centre around an exhibition by women artists called Transformations. Other works displayed in the Foundation Room and pieces belonging to the Matters of Spirit permanent exhibition will also be on view, and there will be a video projection of local artist Stephen Hobbs’ work.

Transformations focuses on the various changes women have experienced in the last century and reflects this through artistic works.

“Lace-making, embroidery, ceramics, tapestry and beadwork were among the activities women were largely involved in at the turn of the 19th century. However, since the mid-1900s, women artists have developed an increasingly confident and critical vision that is manifested in their subject matter and mode of production,” the JAG statement added.

Transformations includes work from the gallery’s various collections that explore this shifting vision. “The idea is to show how women’s place in society has changed,” Murdoch said.

The projection by Hobbs will focus on new and old buildings in Johannesburg, and how they can serve as places for aesthetic and political contemplation.

History of the JAG

In total, the JAG has 15 exhibition halls and various sculptured gardens. It houses collections of 17th century Dutch paintings, 18th and 19th century British and European art, 19th century South African works, a large contemporary collection of 20th century local and international art, and a print cabinet containing works from the 15th century to the present.

The building was designed and built at the beginning of the 20th century by British architect Edwin Lutyens. Art dealer Sir Hugh Lane and Florence Phillips, an art collector, established the first gallery collection from funds given by Phillips’ husband, Lionel, who was a mining magnate at the time.

Phillips donated her lace collection, and arranged for her husband to donate seven oil paintings and an Auguste Rodin sculpture.

The collection is so large that the gallery only exhibits 10% of it at any given time, with the remainder in storage. With generous sponsorship from Anglo American and the City of Johannesburg, and with the help of a trust fund, the gallery is able to regularly acquire new works.