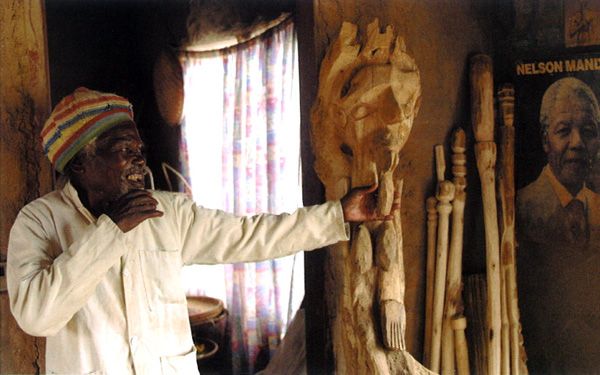 Sculptor Jackson Hlungwani lived a miracle: for some 32 years he had a wound on his leg that was intricately tied to his church, beliefs and extraordinary symbolic wooden sculptures, which he created up until his death at the age of 87 in 2010.

Described as a healer, preacher and visionary in addition to being a sculptor, Hlungwani created a unique world for himself in Limpopo, on a hilltop at Mbhokota village, 38 kilometres from Makhado, formerly the town of Louis Trichardt. He constructed a rocky pilgrimage route, leading to what he called “New Jerusalem, the new country home of God and Christ”, where he displayed several altar pieces, including his Altar of God, Altar of Christ, Gabriel 11 and Jonah’s Fish. People would come to the hilltop to be healed by him and learn about the gospel from him. He also carved his sculptures on the hilltop, and taught prospective artists how to sculpt. His New Jerusalem was built on an ancient site used over the past 1 000 years by Venda people, giving it special significance.

Curator Nessa Leibhammer describes how the artist got his wound: “Hlungwani tells of a revelatory experience that changed his life: one night in 1978 the devil shot arrows through his legs. He managed to get rid of one of the arrows but the other stuck fast. He became so ill that he decided to kill himself. Fortunately, before he could, Jesus appeared before him and told him three things: he would be healed; he must serve God all his life; and he would see God.” For years he limped but insisted that only God could cure him.

People coming on pilgrimage to his New Jerusalem would bring medication for the wound, but he rejected any help, believing it was his way of receiving divine inspiration, says the senior curator at the Wits Art Museum, Julia Charlton.

In the late 1970s, Hlungwani founded his own church, Yesu Galeliya One Aposto in Sayoni Alt and Omega. Here he held sacred dances and prayers, as well as carved large pieces of wood into images of God or Christ. “Hlungwani’s church revolved around a highly individual presentation of Christian faith that synthesized Tsonga-Shangaan religious elements with biblical elements, influenced by Pentecostal theological precepts,” explains Wits University’s Anitra Nettleton in a paper entitled “Jackson Hlungwani’s Altars: an African Christian Theology in Wood and Stone”.

He would sit under a peach tree, with his grey dreadlocks tucked beneath his trademark woollen Rasta beanie, and produce monumental works. Since the 1980s, his work has been exhibited in Europe and the United States, and is represented in public and private collections locally and internationally.

“It is here at Jerusalem that everything begins and ends, the centre of the world, at the meeting point of heaven and earth, east and west. It is here that the laws of God and the ancestors are being enacted,” Hlungwani is quoted as saying in an 1989 exhibition catalogue. But since his death the site has fallen into disrepair, and all the sculptures have been removed.

Now his work is on exhibition at the University of Johannesburg Art Gallery in Auckland Park, with the title A New Jerusalem – Jackson Hlungwani. It includes 40 works, plus photographs of his sacred site taken in the early 1980s. The exhibition comes from Limpopo’s Polokwane Municipal Art Museum, where it was curated by Leibhammer.

She writes in the programme: “We could say that he was a liminal figure moving easily between worlds – between Christian and Tsonga beliefs, between sacred and everyday experience, and between rural and urban environments – reconciling them conceptually in his life and in his work.”

On show are several sculptures of fish, including Leaping Fish, Double Fish, and Emperor Fish. Fish are important in both Christian and African world views, says Leibhammer, and Hlungwani usually carved them out of long pieces of wood with numerous fine scales, all imbued with a serene feel. 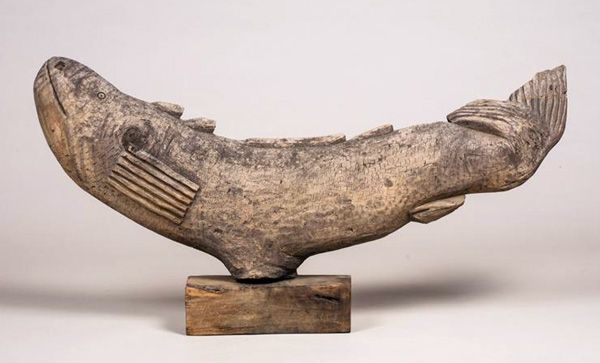 But it’s his Christ and God sculptures that are most striking, his “most powerful works” – “many seeming to appear from the very spirit of the wood”. His Christ Playing Football is an intriguing figure, with the ball caught between his feet, and his head looking downwards. This forces the viewer to bend to appreciate the face.

Another, God’s Leg with Eggs, is an unusual portrait with six oval eggs protruding off a calf and foot, in smooth, pale wood. “Hlungwani tells of how, instead of seeing the whole figure of God, he saw only the bottom half of the deity’s legs, just the section he has selected to show us in God’s Leg with Eggs,” explains Leibhammer. This is the part of his own leg that he believed God healed.

Guardian is a 1m tall figure of God, almost in a tree-like pose, with two branch pieces acting as outstretched arms, and a peaceful expression on the carved face. Hand of God has reference to “a quirky Shangaan carving tradition that includes staffs with hands holding eggs, and headrests with foot motifs”. The huge hand is cupped in a protective manner.

“These crossovers show how the artist drew inspiration from many worlds” – and how he reconciled opposites. The Crucifix depicts snakes and birds, “both important symbols in African biblical narrative but a sign for the ancestors in African understandings”. 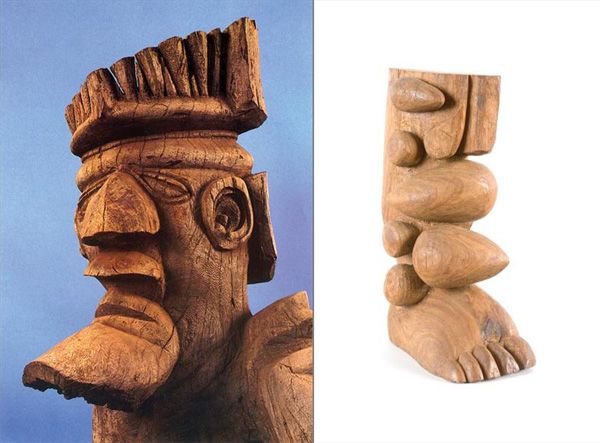 Hlungwani was born in Limpopo in 1923, and herded cattle as a youngster. His father taught him carpentry and carving, skills that were possibly passed down from his grandfather.

When he was 18 years old he went to Johannesburg to work but lost a finger in an accident and was retrenched. He returned his Limpopo home in 1944. Two years later, he had a calling and joined the African Zionist Church, but which he later left to form his own church. It is believed that he started carving in the 1960s, and in 1978 he had his “revelatory experience”. Some time later he built his New Jerusalem, combining his preaching and healing with his art.

In 1989, Wits University bought Altar of God, and the following year the Johannesburg Art Gallery purchased Altar of Christ, where it is on permanent display. These days they are very fragile, following years of exposure to the elements, and therefore they do not travel to exhibitions. “No longer in their original setting, they have lost the sacred environment for which they were made and have gained the status of art in an urban environment,” writes Leibhammer.

Hlungwani’s work was included in the 1984 Tributaries exhibition in Johannesburg, the first time it was exhibited, as well as in a 1989 retrospective show of his work. Hlungwani travelled overseas with his exhibitions, as well as locally. He won several prizes for his art.

Besides the wood carvings, also in the exhibition are three Hlungwani prints, and a slideshow that takes the visitor through his New Jerusalem site in Limpopo. The exhibition runs until 16 July.