The sphinx-shaped hill of Isandlwana
looms over the field of battle. 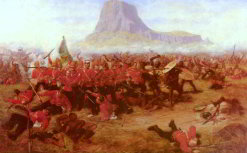 President Jacob Zuma commemorated the 131st anniversary of the Battle of Isandlwana with a call to all Africans to heed the lessons of that day, and be as brave and tenacious as the Zulu warriors who fought for their freedom.

In one of the most iconic paintings depicting the Battle of Isandlwana, a work by British artist Charles Fripp, a British commander can be seen pushing a bugle boy from his regiment ahead of him in an act of mercy, so that the youth could be killed quicker. Or so the story goes.

This is just one of the thousands of stories that came out of the Battle of Isandlwana, fought on a patch of land 16km east of the Tugela River in then Zululand, now part of KwaZulu-Natal province. Almost to the day 131 years later, on 22 January, President Jacob Zuma stood on the very site to honour the 2 300 Zulu warriors and British soldiers who lost their lives.

“At the time, the battle proved that although Africa may not have been as developed as the rest of the world, it was our determination and the spirit to fight for a better life, which is and will remain the main ingredient to success,” said Zuma.

The president addressed a number of dignitaries including Zulu king Goodwill Zwelithini, KwaZulu-Natal premier Zweli Mkhize, and the president of Uganda, Yoweri Kaguta Museveni. The Ugandan president was in South Africa on a state visit to complete a number of agreements related to development of agriculture, sanitation and public works amongst others.

Drawing parallels to the Zulu triumph at Isandlwana, Zuma said Africans should use that same resilience to overcome our everyday battles against climate change and poverty.

“As we continue the quest for peace and stability on the continent, we must be spurred on by the sacrifices of the warriors who fought so that Africa could be free and prosperous.”

The Zulu army were led by the legendary King Cetshwayo who, said Zuma, believed in negotiation instead of war. According to Major Anthony Step, military historian and curator of the Buffalo Volunteer Rifles Military Museum in East London, Zuma’s statement holds true.

“Cetshwayo told his impi warriors not to do anything until the British crossed the Tugela River into Zululand,” said Step.

However, under the guidance of their commander-in-chief Lord Chelmsford, the British did just that, heading for Ulundi, the home of King Cetshwayo. The invasion mobilised the Zulus to attack.

The battle started when a British scouting party found a massive gorge within which the Zulu army camped. Before the scouts could get their message back to their troops, they were killed, and thus the battle began.

For all the British technology and advanced weaponry, the Zulus’ warring spirit was all that was needed to ensure victory, albeit with assegais and shields made from animal hide versus the Martini-Henry breech-loading rifles and other artillery of the enemy.

Step said there are many debatable reasons why the British were defeated. For one they were outnumbered and were beaten by the famous buffalo horn formation (izimpondo zankomo) that the Zulu warriors deployed.

Zuma explained in his speech that the chest of the formation attacked the British infantry and the horns pounced on the right and left flanks, delivering a secondary blow that was to prove fatal. As a result, the 20 000-strong Zulu force annihilated the British third column.

Step added that another reason for their defeat was that they ran out of ammunition. “Those who ran back for ammunition were denied by quartermasters who would not provide ammunition for troops in other companies.”

Step also mentioned the construction of the metal boxes in which the ammunition were stored were cumbersome. The lid had to be unscrewed, which took too much time in the heat of battle. “The troops were not in a defensive position and they ended up in little pockets of resistance,” he said.

Nevill Coghill and Teignmouth Melvill, both part of the South Wales Borderers infantry, made an effort to save the Queen’s colours of their regiment. While trying to cross the swollen Buffalo River, they were killed by the Zulus.

“They both got Victorian Crosses for their effort. The colours were later retrieved, presented to Queen Victoria, and now reside at the Royal Welsh Brecon Museum,” said Step. “Their infantry’s lapel badge was that of a sphinx, and those who fought at the battle remarked that the Isandlwana mountain resembled the sphinx.”

The British went on to redeem themselves at Rorke’s Drift, where they successfully defended their mission station against an assault of 3 000 to 4 000 Zulus.

And what happened to the bugle boy in Fripp’s painting? “The boy was pushed ahead so that he could be killed quickly and not to be cut up into little pieces,” said Step.