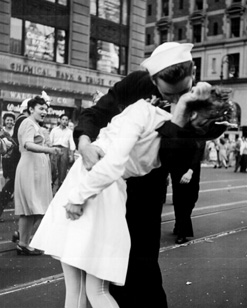 When Jacob Zuma was confirmed as president of South Africa in parliament in Cape Town on May 6 2009, Winnie Madikizela-Mandela stood up to congratulate him by wrapping her left arm around his neck and planting a kiss on  his lips. For South Africans, it was as normal as a handshake. But for foreigners, it was a classically South African custom.

Many world travellers say that South Africa is the only place where they have noticed that people who are not married or romantically involved give each other quick pecks on the lips as a form of greeting. Friends do it, relatives do it, little kids do it, whites do it, blacks do it, coloureds do it. In South Africa, almost everybody does it at social and family gatherings.

No-one talks in public about things like this but everybody finds it interesting. And types different greeting around the world are fascinating: the fist-pump in the African-American community made famous when Michelle did it to Barack during the campaign, the complicated hand-shakes of some South Africans that end with a thumb snap, and the “I love you, man” shoulder hug of guys the world over.

The lip balm company, Blistex, has a nice list of greetings customs around the world.

Is it indeed only a South African thing? What is the etiquette around it? Is the right reaction to respond in kind, offer a cheek, or hold the other person at arm’s length?

An email inquiry brought in a torrent of responses.

Many foreigners living in South Africa have long been amazed by this bit of local colour.

“I find the protocol for greeting someone in South Africa more complicated and varied than just about anywhere else I’ve been,” said Kristy, an American living in Johannesburg.  “For me, it’s basically a question of remembering which of my friends is a hugger, which a cheek kisser and which a lip kisser and responding in kind. But sometimes I forget, and go for the cheek while they’re going for the lips and there’s this awkward fumble!”

Sara is a Swede who spent a month in South Africa in East Brunswick, a mostly coloured area.

“I noticed these quick pecks on the lips and was a bit amazed,” she said. “But it took about two to three weeks until I received my first ones, by a female friend. I was a bit shocked at first as I didn’t expect it, but then I realized it was a sign of friendship. In Sweden we shake hands until we know each other a bit better, then we hug.”

Eva has lived here for 13 years and has inherited a South African family that crosses the coloured and Xhosa spectrum, but is still not used to the custom.

“Both cultural groups (the coloured and Xhosa) do the lip kissing thing and no, you don’t have to be close family, which would have made a little more sense,” said Eva, who was born in Uganda but grew up in the United States. “I will never get used to kissing 30 to 40 people at a family event, and watching my kids have to do the same. I love hugs and happy to kiss cheeks as many times as a cheek is offered, but I always feel the lip kissing thing is just a little too intimate!”

Justin is a South African journalist who has travelled and lived abroad but is now back home.

“I never really thought of this as being an exclusively South African thing, though now that you mention it, I realise that having spent quite a few years outside of South Africa, I have negotiated the various conventions of cheek kissing (once, twice, or thrice) or handshaking or hugging in different countries – but never encountered the lip kissing thing elsewhere,” he said.

“I’d say that there is some ethnic differentiation involved – I am more likely to lip-kiss with coloured or white Afrikaans friends than others. Among my other friends, I do with some and not others – it’s hard to distinguish why. I can’t remember what was more common when I was growing up (in a white Anglophone community), cheek kissing or lip kissing. Though lip kissing was certainly not unusual, as it seems to be elsewhere in the world.”

Justin lived for many years in Angola where he had to negotiate different conventions of greetings.

“I remember when I’d been a long time in Angola, where every social occasion involves a lot of cheek-to-cheek kissing, twice,” he said. “Back in South Africa, without thinking, I did a double cheek-kiss with a friend whom I would normally lip-kissed and then realised she must have thought I was being very strange, or pretentious.”

Justin said that cheek-to-cheek kissing is rarer in South Africa, but that it is catching on in some circles.

“I’d say that cheek-to-cheek-twice is definitely foreign to South Africa – though it is catching on in some circles. Even cheek-to-cheek-once (no lip contact) is a little bit foreign. In families if it’s not lip-to-lip, it will be one person’s lips on the other person’s cheek,” he said. “But then hugging is also becoming more common, and is less complicated. It’s now fine for men to hug each other, which it definitely wasn’t when I was a kid.”

Paul, who owns a guesthouse in Melville, comes from an “Anglo Saxonish” family.

“A kiss on the lips as a hello (between women and men, and women and women but not men and men!) is standard fare,” he said. “The cheek kissing thing is more European and considered a bit upper-class and offish. It’s a bit like the African handshake in social occasions as you’re never quite sure when to do it or how it’ll be construed.”

Laura, a newspaper editor, said she would extend the custom to southern Africa because she has noticed it in Zimbabwe and Botswana.

“It’s a funny thing though, I always try to offer a cheek, but some people get offended when you don’t want to kiss them on the lips,” she said.

Delicia, who is coloured and lives in Pretoria, said her American fiancé had asked her about this form of greeting and she could not give him an adequate answer.

“I was brought up greeting people this way,” she said. “My dad tells me it’s an English habit.”

Astrid, who grew up in Cape Town, said: “’I am coloured and it’s definitely something we do; that’s how I was brought up. We greet with a little peck, but not just to anyone, mainly family or very close friends.”

Marlize, an Afrikaner, said: “To greet with a kiss is something that we grew up with. It’s something completely normal to me.  But it’s also something you do more with people that you associate with, a somebody that you like. Not everybody. Also, times have changed, and people are influenced a lot by other people they meet from other countries. “

Khadeeja, a Muslim South African of Indian descent, said greeting on the lips as a greeting is rare in her community. “Indian community does not do this among themselves,” she said. “Only my white friends greet this way … the rest of the cultures in South Africa (that is, in my circle) all peck on the cheek, or hug, or shake hands. Personally, I don’t like it, as it is an intimate act.”

Virginia, who is of French and Ivorian background, said that her main challenge is to remember what each friend’s preference is. Her now seven-year-old daughter quizzed her when they first moved to South Africa four years ago.

“When my daughter asked me why people were kissing on lips, especially parents with their kids – while I had told her it was only a ‘lovers’ thing,” she said. “I then told her that different people from different cultures have different habits. But she was really puzzled by my answer, didn’t seem convinced for a while and eventually just had to accept it (and accept that I will not kiss her on the lips, whatever happens).”

Flavia, who was born in Brazil and now lives in Johannesburg, said: “I think it’s just a continuation of what mothers and fathers do to their toddlers. I mean, I don’t have kids but I’ve seen different people kissing their toddlers on the lips. I see it as a very nice show of affection between friends and family members. From my experience it’s not isolated to any race, as I have friends from all backgrounds that do that. “

Katarina, who is from Sweden and now lives in Johannesburg with her South African husband, said she still struggles to get it right.

“The first time I kissed a South African friend goodbye we ended up in a face fight where – I understood much later – he was aiming for my mouth and I for his cheeks,” she said. “Since then I’ve learned to embrace this way of greeting but live in a constant fear of – without thinking – opening my mouth too much or start doing funny things with my tongue.”