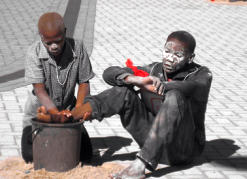 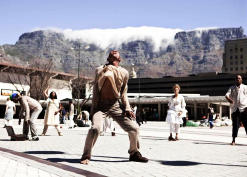 The idea of the festival is to stage innovative art events at unexpected places around Cape Town.
(Images: Infecting The City 2013)

Cape Town’s artists are coming out to play again, and bringing with them friends from other cities in South Africa and abroad. It’s time for Infecting The City 2013, the annual free public arts festival that invites ordinary folk to interrogate their city and interact with artists in unusual urban settings.

This year, expect performances and visual art in the station, the squares, the museums, the gardens and the streets of the Mother City’s vibrant city bowl. Infecting the City runs from 11 to 16 March, from 8am to 10pm every day.

The website explains the concept: “Infecting The City places exciting new artworks in unexpected spaces in the middle of the city, challenging Cape Town’s ideas of art and public space. The festival is designed as a series of routes through the city. Each day has either one or two routes in the afternoon and evening.”

The programme is available online, allowing you to pick your day, time and route. You can either download the entire programme, click on the day that suits your schedule or search for the art piece you want to see. It’s a clever design: turn up at the start of Programme A, for example, at 6pm in The Company’s Garden, for the first performance and take part.

Ushers will lead you on a merry dance through the city, from venue to venue, from performance to performance. Each day ends at 10pm in Church Square. At the Festival Centre at 6 Spin Street, opposite the square, you can buy lunch packs for the day programmes, or wine for the evening’s events, or get earphones for The Uncommercial Traveller.

Festival curator Jay Pather launched the programme at The Taj Hotel on a sweltering Monday afternoon – the city temperature reached 38˚C under a scorching sun – offering some tantalising glimpses into what to expect throughout the week. “Art is an expression of humanity; art is life” was the philosophy resonating through Pather, his audience and indeed, the festival as a whole.

The application pool for participation trebled this year, he pointed out, with 320 submissions received. The artists come from Cape Town, Johannesburg and Durban, Maputo, Nairobi, Berlin, London, Paris, Amsterdam and various cities in the US. It is a truly global festival, a reflection of Cape Town’s cosmopolitan nature.

They are bringing with them dance, theatre, music, visual arts, multi-disciplinary arts, and a light symphony. There is also “restaging, or repositioning classic works to bring new interpretations and understandings”.

“The works interrogate the city. The nature of the festival makes the art accessible to a range of people – other artists and ordinary people who may not usually go to view art,” Pather says.

It opens up a whole world of debate on how the city is perceived, how residents interact with the city, its architecture, its structure, its public spaces and open places. “For the artist, it is very daunting to be so exposed, creating outside his comfort zone of his studio.”

Pather points out that this year, there is no overarching theme. The idea is simply to have a conversation with the city and its inhabitants. While there are performances in places as diverse as Thibault Square, The Company’s Garden, the station, and the District 6 Museum, “these works talk to each other”. And audience participation is encouraged to get the dialogue going.

There is plenty on offer. Try out Emeka Ogboh’s installation Verbal Mapping II, for example. The artist will be replanting taxi calls from Lagos in busy Adderley Street. There will be flash mobs by Unima Puppets and Shaun Acker will be performing In/Apt: A Contemporary Public Hanging, on a slack rope over Government Avenue.

In possibly the most logistically complex item, Sk8 Collective’s Beyond the Skatepark, 300 skateboarders will skate down the length of Long Street – against the flow of traffic, it must be said – ending in Thibault Square, where a skate performance will retell the history of the fringe sport.

The best place to view the downhill run will be at the bottom of Long Street, so you can watch the mass come down the hill and enter the square at the bottom.

City Lights Orchestra, taking place in Church Square, may be the work of Antoine Schmitt, but the performers are the public. People are invited to visit the symphony page on the website, and download it. At the programmed time and place, they will then play the light symphony from their smartphones, laptops or other devices.

“Windows flicker, sending a staccato signal to anyone watching. When looking at a façade of a building or those buildings surrounding an inner city square, the illuminated windows (and tuned in smartphones) blink, pulsate, beat, fade in and out, each according to its own score, but in rhythm with all the others. The windows – be they office or residential, occupied or deserted – come alive and are connected.”

Thoriso le Morusu by Neo Muyanga is inspired by and based on Antjie Krog’s poem Country of Grief and Grace, which reads like an intimate and harrowingly candid conversation between two people about the pain they have caused one another. The performance was originally commissioned by the Southern African Music Rights Organisation and has been rearranged for the festival.

It is played in five movements – prayer, confession, mantra, manifesto and catharsis – and is sung in Sesotho, Afrikaans and English by Muyanga with the Siyaya Chorus, accompanied by Sylvain Baloubeta and Texito Langa. The venue is St George’s Cathedral, the beautiful seat of the Anglican Church in South Africa.

In Please Be My Witness, artist Ben Winfield speaks of the terrible, silent problem of child trafficking. Small sculptures will be placed throughout Cape Town’s public spaces. They are designed to slowly and quietly disappear from sight. There are an estimated 247 000 children working in exploitive labour in South Africa, including an estimated 30 000 child prostitutes.

Mamela Nyamza’s thought-provoking dance Okuya Phantsi Kwempumlo takes place in the Whale Well at the Iziko South African Museum; Aeneas Wilder’s Under Construction at the District Six Museum involves the meticulous construction and spectacular public destruction of a complex wooden structure to ask poignant questions around what it means to be a resident in the city.

Platform_18_28 at Cape Town Station includes paintings, sculptures and photographs produced by students from the Michaelis School of Fine Art, with the themes of movement and transit.

In the Cape Consort’s Shades of Grey at Slave Church on Long Street, old and new converge in an exploration of early vocal repertoire, featuring late medieval European and 19th century colonial culture in historically informed interpretation. The music will be interspersed with music from the time of former Cape Colony governor George Grey.

Punchdrunk and Arcola Theatre present The Uncommercial Traveller. The project involves a series of workshops with post-graduate students and theatre practitioners to devise and write reflective audio tours around Cape Town, using Charles Dickens’s approach of seeking out forgotten places and uncovering hidden stories. Festival audiences will be able to download the tours from the website, get earphones from the Festival Centre, and then walk them. The Uncommercial Traveller has travelled to Karachi, Melbourne, Penang, Singapore and Portsmouth.

A parallel conference, Thinking the City, will run at the Festival Centre each morning from 10.30am to 12 noon, Tuesday to Friday. Respected artists and academics will lead the discussions, which will seek “to strengthen thinking and practice at the intersection of culture and public space, particularly in Cape Town” and unpack “a series of examples and contested territories related to cultural practice in the city, in order to foster a more critical dialogue about creative practice in public space”.

And finally, there is Arts Aweh!, the educational component. It has two legs, firstly, the Africa Centre and Inyanda Youth Network collaboration, in which youth from the Philippi, Dunoon and Mfuleni communities participated in 10 weeks of performing arts workshops culminating in a series of local performances and one collective flash mob performance called Shadows in Infecting The City.

Secondly, up to 500 pupils from grades 10 to 12 from various Cape Town schools will receive a facilitated festival experience. In groups of 20, the participants will experience and discuss the works with a seasoned artist. Up to 60 of them will be invited back to the final day to participate in the Arts Aweh! flashmob.

Everything on the programme is free, except the lunch and wine.

Infecting the City is produced by Africa Centre, in collaboration with Gipca , the Gordon Institute for Performing and Creative Arts at the University of Cape Town, and various organisations, embassies and cultural attachés. Africa Centre is a “social innovator that provides a platform for exploring contemporary Pan-African cultural practice and intellectual pursuit as a catalyst for social change”. Pather is the director of Gipca.