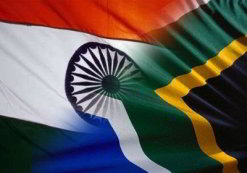 India and South Africa’s shared history
goes back one and a half centuries. 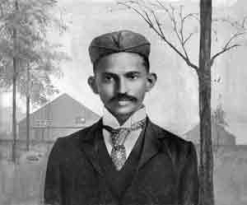 Gandhi, the young lawyer, shortly after
his arrival in South Africa in the late
19th century.
(Image: Wikimedia Commons)

Ask most people who they think of when you say “South Africa” and “peacemaker” and the answer is most likely to be Nelson Mandela, or perhaps Desmond Tutu.

Some people might even recall South Africa’s two other Nobel Peace Prize laureates, FW de Klerk and Chief Albert Luthuli. But few will come up with the name of Mahatma Gandhi.

That’s because the most famous peacemaker never to win a Nobel – although he was nominated four times – is remembered internationally more for his political protest and statesmanship in India, the land of his birth and death.

It is often forgotten that Gandhi spent 20 years in South Africa. These were mutually formative years during which he developed his philosophy of satyagraha, or non-violent resistance, in response to the racial oppression he encountered here. During this time his presence in the country shaped a tradition of opposition to racism that Madiba himself would later adopt.

Of course, the young Mandela – a firebrand, an angry young man with good reason to support a military struggle against apartheid South Africa – was very different from the reconciliatory figure who emerged from prison to become president in 1994.

Likewise, the young Mohandas Gandhi, who arrived in South Africa in 1893, newly qualified as a lawyer after studying in London, would change over the course of time into the iconic Mahatma: a barefoot mystic, wearing only a dhoti, or loincloth, and shawl, sitting at a weaving loom and preaching to pilgrims.

It has been argued that Gandhi’s early political pronouncements expose him as an elitist who endorsed notions of racial hierarchy and segregation. It was only through his experiences of the South African or Anglo-Boer wars at the turn of the century, the Anglo-Zulu War of 1906, imprisonment, discrimination against all so-called non-Europeans in the South African Union, and frequent abuse by state officials, that Gandhi became disillusioned with the British Empire and its racist practices.

Following his return to India in 1915, Gandhi began to campaign for Indian independence – which was finally achieved shortly before he was assassinated in 1948, although the event was marred by Muslim-Hindu violence and the partition of India and Pakistan.

A significant day in India and South Afruca

All of this means that the great man’s birthday, 2 October – a national holiday in India – is also a significant day in South Africa. In 2010 it has an additional resonance because this year marks the 150th anniversary of the arrival of Indian indentured labourers in the former colony of Natal, now known as the province of KwaZulu-Natal.

Today, it is calculated that South Africa has the largest population of people of Indian descent, but born outside India, of any country in the world. Of the million plus who live here, many can trace their roots back to the labourers who were imported to work in sugar cane plantations and in mines, but historians are quick to point out that there are some variations to the story.

On the one hand, some of the “Indian” labourers actually came from further afield in south-east Asia; on the other hand, there were thousands of Indians who immigrated to South Africa independent of the indenture system.

Nonetheless, commemorating the 150-year mark provides an opportunity to reflect not only on historical but also current ties between the two countries. Shared History – the Indian Experience, a festival affirming these connections, has entertained audiences in Durban, Cape Town and Johannesburg during August and September. As in previous years, the festival has included a wide range of events centred on dance, music, visual art, literature and food.

While the overall tone has been one of celebration, those participating in the festival have also been able to offer critiques of their respective Indian and South African societies. Where The Streets Have No Name, an exhibition of work by Indian artists curated by Alka Pande, is a response to the plight of street children – a phenomenon common to both countries.

Pande and her artists worked together with children from the Salaam Baalak Trust, an organisation providing refuge to thousands of children in New Delhi and elsewhere. The result is a fascinating series of twin pieces: one by the artist alone, the other a collaborative painting to which the children contributed.

One of the dominant themes in the exhibition is dreaming: it seems that art offered the children a chance to dream of a better life, to escape – if only temporarily – the deprivation that defines their worlds.

In Seema Kohli’s Memories, for instance, the collaborative piece depicts families and homes – memories of happier times, perhaps, but more likely imagined – while Kohli’s own work alludes to an archetypal or cultural memory that must be recuperated if poverty is to be combated.

This theme is also apparent in Mahua Sen’s Home is a Self-Portrait diptych, while Viren Tanwar presents an ironic take on the consumerism that often informs dreaming in My Dream, which is dominated by brand names and the illusory appeal of bright lights in the big city.

The desire to escape is poignantly manifested in the frequent invocation of airplanes and birds, as well as in the repetition of aerial views of city street plans: from up high, the streets aren’t nearly as dirty and dangerous. Nelly Meignie-Huber’s Kids Who Have No Name” is a sobering re-working of the exhibition’s title, emphasising the difficulties that these children face in creating an autonomous identity for themselves.

Despite its social inequities, India, like South Africa, remains a richly diverse country, and the Shared History festival was a reminder of its complex heritage. There was a particular focus on the south-western state of Kerala and its dance forms and food, but there were also Indian authors and artists whose presence attested to the country’s multilingualism and multiculturalism. The electronica produced by Delhi-based duo The Midivil Punditz, for instance, fuses international pop music trends with Indian classical and folk styles.

In a different vein altogether, poet and translator Arvind Krishna Mehrotra, who was part of a delegation of Indian writers in conversation with South African writers under the banner of Words on Water, spoke about the “cycles of linguistic give and take” through which Indian languages and literature have developed: Hindi and Portuguese, Tamil and Arabic, English, Sanskrit. “Writers,” he says, “tend to resist the limitations of national or regional categories.”

This affirmation of international exchange as a vital component of both individual and collective cultural identity is at the heart of the Shared History programme – and, as we mark the annual anniversary of Gandhi’s birth along with the 150-year anniversary of the mass arrival of Indians in South Africa, it is a principle that should be affirmed again and again.i