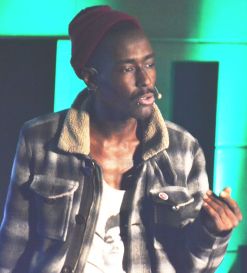 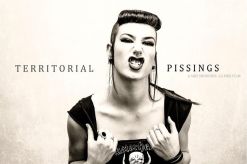 Shongwe-La Mer’s “Territorial Pissings” will feature at the 70th Venice International Film Festival at the end of August.
(Image: The Whitman Independent)

A scene from “Territorial Pissings” depicting dispossessed youth, which is a major theme in the story.
(Image: The Whitman Independent)

When South African low-fi filmmaker Sibs Shongwe-La Mer stood up on stage at TEDx Johannesburg, a conference where creative minds gather to share ideas, he seized the audience’s attention by asking: “What happened to that inner child? What happened to the creative we have left to die?” The 21-year-old was referring to society’s willingness to give its creative powers to a handful of industry gatekeepers.

Dressed in a scruffy checked jacket, jeans, a red beanie and two silver studs hanging from his bottom lip, Shongwe-La Mer epitomised the anti-establishment message he delivered on stage. “I believe we should all just express ourselves. As an audience member let me decide what is good or not. I hate the idea of gatekeepers.”

It is this courage to challenge the creative industry, coupled with some bold filmmaking, that has taken Shongwe-La Mer to the 70th Venice International Film Festival. His latest offering, Territorial Pissings, has been selected for the festival’s first edition of the Final Cut in Venice workshop, which will take place on 31 August. The programme will showcase four African films that are in post-production.

Named after a song by American grunge band Nirvana, Territorial Pissings plays out over Youth Day and focuses on the conversations between disillusioned, middle-class young adults living in suburban Johannesburg. “Even though it is Youth Day, you see all these kids doing drugs, experimenting with their sexuality, and not knowing where they are. This is the generation I grew up in.”

Shongwe La-Mer said every part of the film was taken from his experiences as a black youth raised in an affluent suburb, including the dramatic hanging of one of the characters in the introduction. “Suburbs are not havens. Bad things happen there.”

At the festival, the film will compete against The Cat by Ibrahim El Batout of Egypt, Challat Tunes by Kaouther Ben Hania of Tunisia, and Avec Presque Rien by Nantenaina Lova of Madagascar. Producers, distributors, buyers and festival programmers will assess each film, after which they will choose the best one for the grand prize. The winner will receive more than €55 000 (R750 000 or $73 000) in technical expertise, including sound mixing, digital colour correction and special effects.

Even though the festival is still to start, just being selected has already brought Shongwe La-Mer international recognition. Russian, Ukrainian and French distributors have approached him to buy Territorial Pissings to distribute it globally.

Shongwe-La Mer’s low-fi films are created with little or no budget, which means he needs to use equipment ranging from a camera phone to a handheld camcorder. And as with Territorial Pissings, his production crew is no more than four people. Yet he never intended on entering the independent arena. “I make and release a lot of music; I exhibit as a photographer and I write. So filmmaking kind of came full-circle. Film, it seemed, would embody everything that I love.”

His independent style, he implied, challenged the conventional way films were made. For him, being chosen for the festival was testament to the idea that films did not need budgets or gatekeepers to be successful. “Who are these five people who have money and are dictating how things are going to be? They are not experts of the soul or spirit quality. We are. What we need is people doing things with creative ideas.”

In his TEDx talk, Shongwe-La Mer said the film industry was dying. Strong words indeed, which many around him feared would anger industry role players. But he was unfazed. He added that creativity started before industry put a price tag on it. “Our history was of a free creativity way before enterprise. And now enterprise has wasted away and because of that they are saying we cannot be creative anymore. But I say, ‘No, that is not true’. This is the most beautiful time because we are returning to the roots of creativity.”

Minimalist filmmaking is his message

After graduating from high school, Shongwe La-Mer tried to join the film industry but was rejected. After some deliberation, he realised he could produce his own films without the approval of the industry. He began by using a high-definition cellphone for filming as well as a small production crew. He quickly gained recognition online for his honest storytelling. “If you have a Facebook account there will be 2 000 people who have you in their pockets at any time.”

While Territorial Pissings may depict a group of directionless youth trying to make sense of life, Shongwe-La Mer said he was not trying to punt a particular message. Instead, he held that his message lay in the way he made his films. His focus is on practical action that will encourage creativity in people. “If you do what you do in an interesting way, people will be inspired to do even better things from that platform. For a lot of people, what I spoke about on [the TEDx] stage will not hit home. Not until they pick up a camera and create something, even just for fun.”

Shongwe-La Mer established The Whitman Independent, a platform for independent filmmakers, artists and photographers to showcase their work at minimal cost compared to mainstream platforms.

In its short existence, it has already challenged an established gallery by representing Cape Town fine art photographer Jordan Sweke. Sweke approached the gallery on his own to ask if it would exhibit display his work, but he was turned away. But after The Whitman Independent represented Sweke in an exhibition at the same gallery, the owners praised his photography. “What is this system that is killing artists like [Sweke]?” asked Shongwe-La Mer. “After being rejected, an artist does not go to the next gallery. You know what he does? He makes a fashion photography reel and goes into advertising because he does not believe he can be an artist.”

The Whitman Independent, which operates in Johannesburg and Cape Town, has hosted 15 exhibitions and two film festivals since February. It has also published its first book, Culture, a compilation of illustrations, short stories and poetry. In September, it will go beyond the confines of art when it hosts its first food day in the Mother City. “Me and the Cape Town curator were saying that the first sign of a free society is when food becomes less expensive,” said Shongwe La-Mer.

View an excerpt of Territorial Pissings on the Brand South Africa blog.