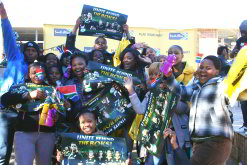 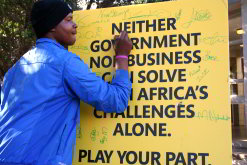 Kanyisa Jonono of the HIV prevention
programme loveLife pledged his support
for Play Your Part. 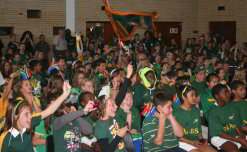 Brand South Africa paid Port Elizabeth a visit as part of its Play Your Part campaign, and to pledge its support for the Springboks ahead of the all-important Tri Nations clash against New Zealand.

The campaign was launched in June, and asks ordinary South Africans to do whatever they can, no matter how big or how small, in making the country a better place to live in. The campaign will also throw the spotlight onto any initiatives which are already bearing fruit in this regard.

The Boks clashed with arch rivals New Zealand on 20 August at the new Nelson Mandela Stadium, the first meeting of these two rugby giants in 41 years on Port Elizabeth soil. The home team won the game, beating the All Blacks 18-5.

Despite a few early setbacks, the Springboks remain the only Tri Nations team – of themselves, Australia and New Zealand – that has never lost all of their games in the tournament.

Their form has caused concern among fans ahead of the Rugby World Cup next month, but the Boks – two-time and current world champions – are determined to become the first team ever to successfully defend their world title three times.

The Springboks’ schedule during the group stages of the tournament is as follows:

Saru has its own national Springbok supporters’ initiative – the Unite 2011 campaign, which features “Let’s Do It Again”, a specially commissioned anthem from award-winning local groups Freshlyground and Goldfish.

With less than two weeks until the Springboks depart for the 2011 Rugby World Cup in New Zealand, Brand South Africa is initiating a series of rugby-related activities to garner countrywide support for the team.

First up was a visit to Charlo Primary School, in a suburb north of the city centre, where the Boks are clearly firm favourites, judging by the enthusiasm with which national coach Pieter de Villiers and his assistants Gary Gold and Dick Muir were greeted.

After a short video presentation by Saru and a Q&A with Bokkie the Springbok mascot, children queued excitedly for autographs. Then the Springbok coaches gave a rugby clinic to a lucky few.

Twelve-year-old Lubabalo Tsako was adamant that the Springboks would be victorious. “They can do it. I believe in them.”

At the Nelson Mandela Metropolitan University, Brand South Africa asked students to pledge their support for the Play Your Part campaign.

“They are signing a pledge to play their part to make South Africa great. Part of this means to support the Boks ahead of and during the Rugby World Cup,” confirmed Vuyo Veza, Brand South Africa representative.

Blanket Mandilake and Ntombikayise Ngetu, two second-year IT students at the campus, gave a high-five in support of the Boks and said they were very sure the team will come home with all the glory.

“We wish them all the success. We are 100% behind them,” said Mandilake.