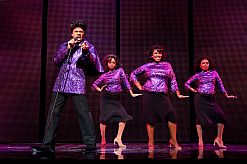 US hit musical Dreamgirls will be on stage
in South Africa from 11 March in
Johannesburg, before moving to
Cape Town’s Artscape Opera House from
8 June.
(Image: Dreamgirls)

The Broadway musical Dreamgirls opens in Johannesburg’s Teatro theatre at Montecasino on 11 March 2011. Starring some of the best local talent, the production is set to captivate South African audiences.

Renowned US choreographer Robert Longbottom, who is directing the show, said he is really impressed by the level of talent, skill and determination displayed by the all-South African cast.

“The show is not going to be any different here than when it plays in Detroit on any given night,” he said. “An Effie from South Africa could end up in Broadway or in the West End or a Far East production.”

Effie White is the lead female character in the production and Lindiwe Bungane will play her role in the South African version. The character is central to the musical’s plot, and she captures the audience emotionally.

“Every musical has to have a character that the audience identifies with; Effy is definitely the character the audiences has a connection with,” said the show’s music supervisor Sam Davis.

A passionate vocalist, Bungane gives a powerful portrayal of her character’s emotional and musical vigour. Her dominant voice filled the theatre and sent the audience into waves of applause at the final dress rehearsal attended by the media two days before the show’s opening.

Performing one of the show’s most famous numbers And I am telling you, I’m not going, which marks the turning point in the storyline, Bungane shows off her incredible voice skills accompanied by her heart-rending acting ability.

The production has a simple set with glamorous, swanky costumes for the actors, who fall effortlessly into their American character. Alluring lighting and background graphics are used to add to the glamour and recreate the frenzy and buoyancy of the 1960s and 1970s – the decades in which the musical is set.

The swift costume and set changes and intelligent music transitions make every minute of the two-and-a-half-hour show electrifying. “It’s all about the details. That helps them move, it helps them stand, it helps them feel like they’re performing. It’s a certain time and space,” said the show’s designer William Ivey Long.

The show tells the story of a female singing group looking for a big break and determined to make it to the top of the US music charts. Although it entertains the audience with its dynamic and flashy singing and dancing, the show also takes the audience on an emotional journey into the characters’ lives, both professional and personal, as they wrestle with tough issues such as loyalty, morals, independence, survival and the will to succeed.

Tracey-Lee Oliver from Cape Town plays the character of Deena Jones. Oliver has performed in some of the biggest theatres in South Africa and around the world in productions such as Hazel Feldman’s Motown Magic; Richard Loring’s Knights of Music and Motown Magic Christmas.

Musical theatre graduate Candida Mosoma plays the character of Lorrell Robinson. She has starred in plays such as The Lion King, Joseph and his Amazing Technicolor Dreamcoat, Jesus Christ Superstar, Pinocchio, Let There be Rock, and Solouette to Hot Spots.

Hayley Christian plays Michelle Morris. Christian studied at the Royal Schools of Music in London, and has performed in China, Macau and Hong Kong as part of the band New Generation. She has also performed in Egypt, Jordan, Seychelles and Spain.

He runs his own company called Pono Pele productions. He was the creative producer for the unveiling ceremony of the Fifa 2010 Emblem presented in Berlin in July 2006 and recently completed shooting for a new movie, Winnie – a life, in which he he stars alongside movie star Jennifer Hudson.

Bjorn Blignaut plays the flamboyant James “Thunder” Early. Blignaunt has performed in Belgium and recorded an album in Europe.

Lebo Toko plays the character of CC White. Toko started his stage career acting in South African children’s theatre productions. He played the role of award-winning South African writer Fred Khumalo in the play Touch My Blood. He was also in the production The Boys in the Photograph and Mamma Mia.

Television and radio personality Shane “Duke” Wellington plays Marty Madison. Wellington is one of South Africa’s top ring announcers. He was part of the 2006 Fifa World Cup Trophy Tour, and participated in the opening ceremony for the 2009 Fifa Confederations Cup.

These talented South Africans will be performing in the musical from 11 March in Johannesburg, before moving to Cape Town’s Artscape Opera House from 8 June. “I’m overwhelmed by the talent that I’ve seen here,” said John Bregolioc – the show’s producer.