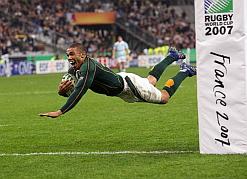 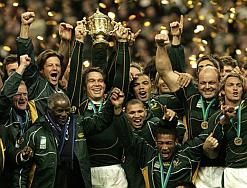 John Smit, captain of the triumphant Bok
rugby team, lifts the Webb Ellis Trophy. To
Smit’s left is Bryan Habana, while former
president Thabo Mbeki is in the front left
of the picture. (Image: SA Rugby)

Rugby fans in both hemispheres are looking forward to the British and Irish Lions’ tour of South Africa in 2009. Now the tour’s main partner HSBC has launched a schools rugby initiative that includes a drive to supply underprivileged South African children with much-needed rugby equipment.

The initiative, known as the Rugby Festival campaign, was launched by two of rugby’s brightest stars, England’s Jason Robinson and South Africa’s Bryan Habana. Habana was named the International Rugby Board’s (IRB) Player of the Year in 2007.

The SOS Kit Aid programme is partnering with HSBC in its Rugby Festival scheme. SOS Kit Aid gives less advantaged children in emerging nations around the world a chance to play and develop rugby. It achieves this through the collection and distribution of unused or unwanted kit such as balls, jerseys, boots and protective gear, from schools around the UK and Ireland.

Part of the Kit Aid programme involves, for the first time, the twinning of 40 HSBC schools in the UK with 40 South African schools. Pupils at these schools will benefit from the kit collection initiative and will be able to proceed with the development of their own programmes, with equipment delivered during the Lions tour.

In November 2008 the SOS Kit Aid programme proudly announced its 100th kit delivery – to Swaziland, the first Kit Aid recipient outside eastern Europe. Rugby is a growing sport in the small Southern African nation, which currently boasts 14 clubs and 4 870 registered players. There are 1 320 pre-teen boy and 1 600 pre-teen girl players, with 946 teenage boy and 514 teenage girl players. Amongst the senior ranks there are 360 male players.

Habana and Robinson, both members of IRB Rugby World Cup-winning teams, were on hand at the twinning of the first two schools, southwest London’s Pimlico Academy and Hillcrest Primary School in Port Elizabeth.

The pair kicked off the collection by donating some of their own old kit, and also took the time to offer some personal playing tips to their young fans. Over the coming months, businesses, schools and individuals in the Pimlico area will be encouraged to make their own contributions.

Pimlico Academy principal Jerry Collins said, “We are delighted to be given the opportunity to twin with Hillcrest Primary in South Africa, and in so doing, participate in the SOS Kit Aid project. The opportunity to develop a wider cultural exchange with the kids in South Africa in the lead up to the Lions Tour is a hugely exciting prospect.” The school now has a rugby team for the first time ever.

Robinson fully supports the programme and believes that through it, two very different cultures will be brought together in a unique way. “It offers hundreds of children both here and in South Africa a unique and fantastic way of sharing a Lions experience. I am excited to see how the twinning of the HSBC rugby schools with the schools out in South Africa will have a positive impact on the children.”

South African superstar Habana personally nominated Hillcrest as the first school to be linked with an HSBC school. “Hillcrest Primary School has very basic facilities and yet they are desperate to play rugby,” he said. “Rugby is already proving to have a positive impact on the lives of these children and this will be further helped through the support of the children from Pimlico.”

A superstar of rugby

Habana launched his own rugby development organisation, the Bryan Habana Foundation, earlier in 2008. “I have had a great upbringing and there was always a great level of support,” he remarked. “But you go to a school like Hillcrest where there is very little to aspire to. For me, to go there and to try to make a difference is a big challenge.”

The pride of South African rugby, who plays on the wing, was an integral part of the team that lifted the William Webb Ellis Trophy for the second time in 2007. His record-equalling eight tries (the only other player to score that many tries in an IRB Rugby World Cup final is the legendary Jonah Lomu of New Zealand) earned him the IRB’s top accolade for an individual player in that year.

Habana currently plays for the Pretoria-based Blue Bulls and was named the South African Player of the Year in 2005 and 2007, as well as the Young Player of the Year in 2004. The star, who famously raced a cheetah over 100m in 2007 and lost by only a narrow margin, is feared and respected by his rivals for his exceptional fleetness of foot. The cheetah race was to raise awareness of the animal’s endangered conservation status and to support the work of the De Wildt Cheetah and Wildlife Trust.

As a team, South Africa is presently second on the IRB’s latest world rankings, behind their age-old rivals, the New Zealand All Blacks. The country’s Sevens Rugby team has just won their first Sevens Cup title on home soil, coming from behind to beat defending champions New Zealand 12-7 during the first week of December 2008.

The tournament is the second on the annual Sevens calendar, taking place a week after the opening event of the season in Dubai – which was also won by the South Africans. The next leg of the 2008/2009 season takes place in Wellington, New Zealand in February 2009.