Father and son beside the ruined pool. 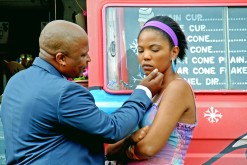 Amos and Themba survey the sparkling
waters of the renovated community pool.

New South African film Hopeville, due to hit the cinema circuit on 3 September 2010, spreads the message that even one person, when they have the courage to take action, can make a big difference in many lives.

Shot in Waterval Boven, Mpumalanga province, and featuring a stellar cast of local actors, Hopeville is directed by John Trengrove and produced by Curious Pictures, with music by producer/composer Murray Anderson.

The film will open at 13 Nu Metro and 20 Ster-Kinekor theatres countrywide, as well as a handful of independent cinemas.

Amos, a reformed alcoholic, is a man looking for a new start. When he arrives in the fictional town of Hopeville with his estranged son, who has been put into the custody of his father after his mother dies unexpectedly, he faces a tough battle with corrupt officials and an apathetic community.

As part of his custody agreement, Amos has promised to encourage his son’s promising swimming career, but the pool in Hopeville contains only garbage and stagnant puddles of water.

Amos decides to clean it up for his son’s sake, and the project soon captures the attention and goodwill of the community, who begin to pitch in.

The mayor, however, is not pleased because he and his cronies have decided to build a liquor store on the land, and Amos faces fierce resistance, intimidation and threats. He is going to need all his courage, and the support of the residents, if he is to complete the restoration of the pool.

“Amos’s journey will touch a lot of people, as we see somebody trying to put things right,” said Ndaba.

Others in the cast include Terry Pheto of Oscar-winning Tsotsi fame, Nat Singo (Beat the Drum) as Amos’s son Themba, Jonathan Pienaar (The Lab), and the ever-popular Leleti Khumalo (Invictus, Cry, the Beloved Country).

Hopeville tackles contemporary issues of great relevance to South Africans, such as service delivery, social and moral values, crime and corruption, and the relationships of family and friends.

Hopeville was inspired by the 2009 television series of the same name, also produced by Curious Pictures. The series producers considered more than 70 locations before settling on the scenic town of Waterval Boven, sitting on the very edge of the escarpment between the high- and low-lying areas of Mpumalanga.

The town is popular for fly-fishing, rock-climbing and hiking, and features a number of historical and national monument sites dating back to the days of the Nederlandsche Zuid-Afrikaansch Spoorweg-Maatschappij, which operated in the late 19th century.

The film’s cast is largely the same as that of the series, as is the story.

NGO Heartlines, in partnership with SABC Education, commissioned the series as part of its work of using television and film to help South Africans strive towards the values of humility, compassion, responsibility, perseverance, and other positive goals, in their lives.

The six-episode series aired for the first time in March 2009, and was re-broadcast in September that year. In late September it took top honours in the Drama and Mini-series catewgory at the Rose d’Or, a prestigious international festival featuring the best in entertainment television. The competition takes place every year in Lucerne, Switzerland.

“What I love about Heartlines’ work is that they allow us to talk about social issues, which opens up dialogues between different people,” said Jonathan Pienaar, who plays Fred Palmer in the series and film.

Beautifully filmed and deftly acted, Hopeville will leave audiences inspired to imitate Amos’s actions and do some good in their communities, even if it is something small, without waiting for someone else to step in.