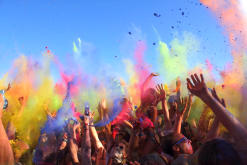 During Holi, coloured powders thrown with abandon into the air symbolise the colours of life.
(Image: Holi One)

The trend these days is to make the coloured powders, as far as possible, from natural ingredients.
(Image: Colours of India)

It is only fitting that the newest instalment of the biggest colour festival on the planet – Holi One – be held in South Africa, the Rainbow Nation and home to many different cultures and races.

The Holi One colour festival is a fun-filled day where people from different backgrounds come together to celebrate diversity through music, dance and performance arts, with the element of colour being the primary focus of the day.

Inspired by an ancient tradition in India, the first global Holi One colour festival took place in Germany in 2011 and the concept has since captivated crowds across the world, gaining popularity in places such as Munich, Hannover, New York, Tokyo, Istanbul and Singapore.

The open-air festival is now to take place annually in South Africa. It kicks off in March 2013 in three cities – Cape Town, Johannesburg and Durban.

Cape Town will be the first city to host the festival on 2 March. It will take place on the Grand Parade from 12h00 to 20h00. Durban and Johannesburg dates have yet to be confirmed.

The South African Holi One colour festival series will be organised by Seed Experiences, the event management company behind the Rocking the Daisies music and lifestyle festival.

Thousands of South Africans, dressed in white, will come together to experience a wide array of electronic dance music and perform the traditional dispersal of coloured powder into the air, celebrating the festival’s core message ‘We Are All One’.

In Hindu culture the festival marked the beginning of spring and was established to commemorate good harvests. It was a time to enjoy spring’s abundant colours and say farewell to winter.

The event also had a religious purpose, commemorating various events present in Hindu mythology, such as the divine love of the deities Radha and Krishna, and the defeat of the demoness Holika. During this event, participants would start a bonfire and throw coloured powder at each other.

Promoting a spirit of togetherness

The global Holi One festival is not directly linked to the original Holi Festival, or with its religious aspects, but is inspired by it and shares the same values – a day steeped in the old Indian tradition of bringing people together in love and peace, a tradition that transcends backgrounds and cultures.

“We will carry this ethos throughout all of our planning, promoting a spirit of camaraderie and togetherness in the ‘We Are All One’ philosophy – something that we feel is very relevant and necessary in the South African context, explained Seed Experiences MD Brian Little.

“The aim of the festival is for people to celebrate the diversity of life through music, dance and colour.”

By throwing the powder in the air and at each other revellers feel a great sense of unity, freedom, fun and solidarity.

Available in five different colours, the powder that will be used during the festival is produced locally and is traditionally called Gulal powder. It’s made from corn flour and is an eco-friendly, completely water soluble and non-toxic product.However, say organisers, people with a history of asthma or similar conditions should wear protective gear.

The countdown to throw the powder will take place on the day, on the hour, every hour starting at 14h00.

Tickets, which include the five powders, can be purchased on www.webtickets.co.za at R290, and at R190 for the non-powder version.

The South African instalment of the Holi One festival will include performances by a wide range of electronic dance music acts.

Although the line-up has not been confirmed yet, festival goers can expect an entertaining mix of local artists, according to the organisers.

“The hype around the event is already massive and we are confident that the Holi One colour festival will become one of the country’s biggest and most differentiated annual events,” said Little.

South Africans are already excited about this unique festival which is evident in the more than 4 000 followers the event has attracted on its social media platforms since its official launch on 5 December. 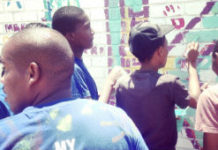 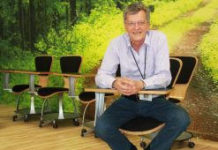