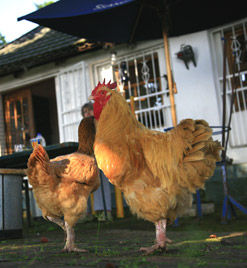 Today was an important day in my life as a rural Limpopian (one who hails from Limpopo province). I gave away three live chickens that I had personally bred and raised. It marked a rite of passage in my becoming a true daughter of Limpopo soil, according to my friend Mama McNeill, a tiny, sylph-like 70-year-old Swiss-born African who has lived in rural Limpopo most of her life. To give and receive live chickens, she tells me is an African soul gesture.

It is a conferral of abundance, a bestowal of blessing, because the chicken, after all, represents food security, either eggs or meat, depending on whether you can afford to kill the golden goose, as it were, or whether a bunch of hungry relatives suddenly appear at your door. The first time Mama McNeill received The Chicken Gift was when she was a young nurse at Elim Hospital, near Thohoyandou in the 1960s. She carried them home, one under each arm, grateful for the long term source of eggs.

I think she may be right. When I offered the three healthy, handsome brown chickens to my gardener’s wife, Mrs Mhlarhi, she smiled like she’d won the chicken Lotto. I gave her one young rooster and two hens, an excellent combination for further breeding and laying, and they will undoubtedly provide her family with many eggs and the odd Sunday lunch. In exchange I received a large pumpkin and a bunch of sweetcorn.

Mrs Mhlarhi and I drove the chickens (packed in a Zamalek crate) to her home in Julesberg, a remote mountain village about 50 kilometres from Agatha, near Tzaneen, where I live. We drove past Dan Village, Kujwana, Mhlaba Cross, Lenyenye, Tickyline and Maake, a series of rural settlements in the foothills of the northern Drakensberg. And as we travelled I was struck by the omnipresence of the chicken and the ancient nature of our relationship with them.

You can buy live chickens almost anywhere along the roadside, at prices ranging from next to nothing to R500. There are hundreds of hand-made chicken signs, painted on wood, metal, cardboard, walls: Chickens 8km. Chickens now open. Xixevo. Dikgogo. You can buy them at taxi ranks and bus stops, alongside hair salons, mobile phone stalls, car washes and spaza shops.

Of course you can also buy dead ones just about anywhere, from roadside walkie-talkie (head and feet) outlets to the ubiquitous KFC. Chickens are a central feature of rural village life, and people carry them around by their necks, by their feet, in boxes tied onto bicycles, in straw baskets on their heads. I even saw a woman carrying one in her very fashionable green leather handbag.

They can be the source of dramatic soap operatic feuds between families and friends, said Mrs Mhlarhi, as we released her new batch. She has witnessed tremendous fights breaking out as a result of chickens being stolen or misappropriated.

But she would treasure these ones, she assured me. I believed her because her husband, who works in my garden, although quite unable to tell the difference between a weed and a flower, proved to be an ace chicken sexer when my first lot of chicks hatched. He has an opinion on any chicken related matter and has given me invaluable advice.

Chickens are not just a black thing. My gay Afrikaner garden landscaper, for example, grew up on a chicken farm near Gravelotte and has also proved to be a font of wisdom on anything from feather loss to inexplicable mood swings. And the comforting symbolism of the chicken endures out here despite creeping urbanisation. My auditor buddy instructed her architect to make a loft bedroom in their new designer home so she could “roost like a chicken from my childhood”.

I realised soon after arriving in Limpopo that I would have absolutely no cred with anyone if I didn’t have chickens. No self-respecting rural dweller here would ever dream of not having chickens. Where could I buy some? Speak to Pieter the dry cleaner, said the landscaper, as if the connection between chickens and dry cleaning was obvious. But before I did, my mother gave me three fluffy little chicks she had got from a friend.

My favourite chick, Patricia, hoovered up entire loaves of bread and 12-kilogram sacks of crushed mealies and grew and grew until it was apparent that she was in fact a he, and that he, now Patrick, was the biggest cock I could ever hope to find. Sometimes you get what you need, said the landscaper wisely.

Patrick has become an object of great admiration in Agatha. His name is spoken with soft reverence and I have a long list of locals wanting his offspring. I could make a lot of money out of chickens, I am told, but just to ensure good karma, I heeded the advice of Mama McNeill and decided to give the first ones away.