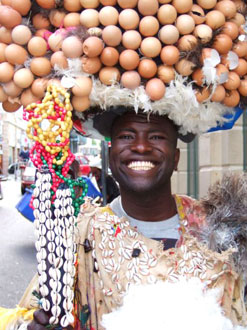 A trip with friends to the Grahamstown National Arts Festival was excellent muti for my recent bout of national blues. The first character we bumped into at the entrance to the craft market was Gregory da Silva, the Egg Man from Benin. He was wearing skins and bangles and feathers and beads, and upon his head was a giant headdress made out of hundreds of eggs and a pair of horns. “Welcome to South Africa!” he roared, “You are very welcomed!”

He travelled the continent’s festival circuit he said, and whipped out a business card with an email address that went something along the lines of eggman@festival. He was wandering Burlesque, around the market delighting people with his outlandish costume. Near to the Egg Man, wide-eyed children were being taken on camel rides as their parents billed and cooed. On the stage beyond him, a medley of Xhosa women dressed in bold and bright 50’s dress sang sweet songs a la early Miriam Makeba and Dolly Rathebe. A drum ‘n dance troupe was getting ready to perform next, shivering bravely in the freezing cold in their scanty kudu-skin outfits.

There were fire-eaters, hot coal walkers, gypsies and acrobats. There were arty types, theatre types, grungy students, friends, families, determined shoppers, hippies and more. A steady stream of revellers headed for the beer tent. Inside a comedian was ripping off the nation and the mood was “festive” as they say in the Eastern Cape. Outside, food stalls tempted with assorted delights. You could go for a traditional boerewors roll or a Buddhist meal in which absolutely nothing whatsoever was injured during its making. You could buy freshly squeezed orange juice, richly spiced curry and various wraps, pancakes, waffles, muffins and rotis.

The craft on offer was great – an interesting diversity of good products. Colourful woollen hats from Nepal, glassware from Knysna, embroidery from Indian, beadwork from KZN, ceramics from Swaziland, basketry from Zululand. The clothing was funky local, fringe, Indian, eastern. And you could get just about everything on the affordable shopping front from suede handbags and mohair blankets to paper lanterns, wooden candlestick holders and Laugh It Off t-shirts.

From the holistic section came wafts of incense. Inside, gentle people promised to help with your chakra or your karma or your aura. We floated around getting minute- long free massages and having delicious things rubbed on us. I bought a head-massaging device called The Stress Reaper, which was pioneered by a female Capetonian pharmacist. (I call it the Head Tarantula and I have used it every single day since its purchase). And we met a beguiling Durbanite who had studied incense-making for the past seven years and enchanted us with his explanation of the high and low notes he used, the sweet notes and spicy ones.

Eventually we were laden with goodies: Incense, a hammock, a head massager, Nepalese beanies, kudu biltong, decorative glass plates, assorted books, wads of business cards. We dropped off our stash at the hotel and then slipped into carnival mode, spending the next while getting lost in the spectacle, in the delicious eye-candy of it all. We walked the streets, stopped in at cafes and shops, saw photographic exhibitions, art shows and fireworks displays. We drank lustily at a place called the Calabash, lurching outside every now and again to dance with the marimba band playing upbeat reggae on the pavement. We met up with friends from all over the country – musos, journos, good ous.

We saw a fab musical dance as well as the premier of a great movie called Triomf, based on a book of the same name by SA author Marlene van Niekerk. We drank tequila at a place called the Long Table – an enormous building with incredibly long tables! – that was jam packed with party people – and ended up very late at night listening to a terrible one-man cover band that made every song sound the same. And we loved it.

The festival atmosphere was easy and upbeat, the mood spirited and colourful. There were lots of families and friends, plenty of laughter, much activity, streets full of cold but happy festinos, students smooching behind frosted glass windows. Everybody seemed to talk to each other for a change– in the queues for the ATM’s, in the parking lots, on the street, in the crowds. It was a lovely reminder that there isn’t any shortage of contemporary creative spirit about. And that creativity always has the power to heal, unite and inspire.