Numerous dignitaries, including former mayor of Johannesburg Amos Masondo (right), were there to launch the celebrations of Orlando East’s 80th anniversary. 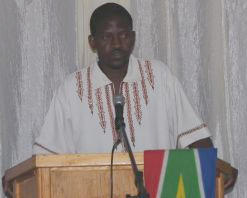 Tshenolo Mokhele has put 11 years of his life into maintaining the legacy of James Sofasonke Mpanza.

Godfrey Gxowa, former Moroka Swallows football club PRO and former journalist Sophie Tema, in whose car Hector Pieterson died in while she was driving him to hospital in 1976, were there to celebrate Mpanza’s legacy .
(Images: Ray Maota)

Orlando East in Soweto is celebrating its 80th year of existence this year and has lined up a number of celebrations in the next three months.

The festivities were launched at Chaf Pozi, a restaurant at the suburb’s well-known cooling towers – now a popular spot for bungee jumping – on 21 September 2012.

Events will run until 16 December 2012, and include a fun walk/run; a football tournament, beauty pageant and jazz festival; a gala dinner; and, a lunch for senior citizens of the community.

Mathang said: “The year 2012 is filled with many milestones in our country. The ruling African National Congress as well as Alexandra township are turning 100, while our beloved Orlando Pirates football club turned 75 years.”

Veteran performers David Ramogase and Thapelo Mofokeng, who have a rich heritage in the entertainment industry in Soweto, thrilled the crowd. They took the old ladies and gentlemen down memory lane with their rendition of songs from the last century, such as Louis Armstrong’s “What a wonderful world”.

A bit of history

Masondo, who has been appointed as chairperson of the Orlando 80th Heritage Anniversary Celebrations Committee, gave those in attendance a brief history of Orlando as far back as the discovery of gold in Johannesburg in the late 19th century, which brought hundreds of migrant labourers to the city. They were eventually settled in Orlando.

Masondo said: “Orlando was established in 1932. At that time it was a farm in southwest Johannesburg, named after Orlando Leak, its first administrator.”

He went on to mention the many people that hail from or have lived in Orlando East. Some of the familiar names are Kaizer Motaung, owner of Kaizer Chiefs football club; Jomo Sono, owner of Jomo Cosmos football club; Nelson and Winnie Mandela; Walter and Albertina Sisulu; and mining magnate Patrice Motsepe.

“Although I have mentioned quite a few famous people from Orlando East, none can eclipse the father of Soweto, James Sofasonke Mpanza,” said Masondo.

An ode from an Orlando girl

“I’m honored to be part of these celebrations as it is vital to capture our history and heritage. Orlando East as a township was never planned but happened because of the influx of migrant labour that resulted from the discovery of gold in Johannesburg,” said Shabangu, who grew up in Orlando East.

“Orlando East used to have a vibrant nightlife from shebeens like Peter 5 Piece, Ka Tot, the DOCC, where our parents used to go see Ramogase and Mofokeng, and 707,” she said.

Shabangu jokingly described the old houses in Orlando East, consisting of just two or three rooms, which meant that the dining room or kitchen would turn into a bedroom at night.

“We even devised a way of ironing our school dresses by sleeping on top of them,” she said to the crowd’s laughter and applause.

Shabangu said that although gangsterism was rife back in the day, it also produced exceptional people such as journalist Sophie Tema and world-renowned musicians such as Jonas Gwangwa and Letta Mbulu.

“Orlando High, breeding ground of many leaders in all spheres, is dilapidated and I hope this committee that has been established will revive it to its former glory,” said Shabangu.

Tshenolo Mokhele, member of the James Mpanza Legacy Foundation, said: “It wasn’t the easiest of things to bring recognition to Mpanza’s work. This has taken 11 years of my life but I’m happy to see our dream come to fruition.”

Mpanza is widely known as the father of Soweto because as a member of the Orlando Advisory Board in 1944, he decided to actively address the problem of overpopulation in Orlando and led a group of 20 000 homeless people to a vacant land next to the Klip River where they set up a squatter camp.

The new settlement was called Masakeng, after the sack material used to build the informal houses.

Mpanza sectioned the site into four blocks and administered them without assistance from the authorities.

In 1945 mining tycoon Ernest Oppenheimer loaned the city R6-million (now equivalent to US$758 000) to provide adequate housing for the squatters at a site in Jabavu. This marked the start of Soweto, now one of the most famous townships in the world.

Professor Noor Neftagodien, head of history at the University of Witwatersrand, said: “History happens around us every day but not all is documented. In the 1970s and 80s people recorded their history because they knew the apartheid government would distort it.

“This initiative by the foundation to document the history of Mpanza and maintain his legacy is great.”