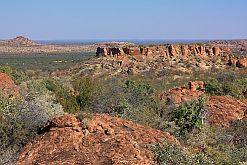 The ancient civilisation of the Kingdom
of Mapungubwe was rediscovered in 1932
and became a world heritage site in 2003.
(Image: Flickr)

Artefacts such as this gold stick were
discovered during excavations of the
site and could have belonged to those
in royalty.
(Image: Mapungubwe)

The South African government and Coal of Africa mining group have made a deal to protect Limpopo’s Mapungubwe World Heritage site from activity at a nearby colliery.

The Department of Environmental Affairs (DEA), Coal of Africa and South African National Parks (Sanparks) signed the memorandum of agreement in Pretoria on 1 September 2011.

The deal follows a spate of controversy surrounding Coal of Africa’s Vele Colliery in Limpopo and protests by NGOs, which felt the world heritage site was under threat.

The Vele mine is said to hold deposits of high-quality coking coal that can be exploited for the next 25 years, yielding 5-million tons a year.

John Wallington, CEO of Coal of Africa, said: “This agreement is a declaration of intent with the goal of creating and developing a sustainable model of coexistence which should set new and more inclusive standards to be aspired to.”

Wallington added that with the help of the DEA and Sanparks, the mining group could set the standard for balancing conservation and economic development.

“We have a responsibility to protect the natural and cultural richness of the heritage site while substantially increasing the size of the economy and thereby creating jobs that our country desperately requires,” said Wellington.

Fundisile Mketeni, DEA deputy director-general, said that the department will defend the heritage site and ensure that it remains protected.

The memorandum of agreement signed by the three parties makes way for biodiversity offset programmes with multiple benefits.

The parties agreed to 10 joint undertakings, which include making use of the cultural and natural resources of the heritage site for the benefit of the local community, developing biodiversity programmes and monitoring their implementation through a steering committee, and providing enough resources to facilitate their implementation.

“Parallel to this initiative, the South African Botanical Institute has been mandated to undertake a national process of developing national guidelines for biodiversity offsets which, once completed, will influence the activities in the area as well,” said Mketeni.

The ancient Kingdom of Mapungubwe (meaning “place of the stone of wisdom” in Venda), became South Africa’s fifth world heritage site in July 2003.

Situated on the border of South Africa, Botswana and Zimbabwe, the Iron Age site was home to an advanced civilisation which lived and traded there between 1200 and 1270 AD.

According to Unesco, Mapungubwe’s position at the crossing of the north and south as well as the east and west routes in southern Africa also enabled it to control trade, through the East African ports to India and China, and throughout southern Africa

The site was rediscovered in 1932 and has been heavily excavated since then.

The demise of the civilisation was brought about by increasingly longer spells without rain, forcing migration northwards. “The remains in the Mapungubwe cultural landscape graphically illustrate the impact of climate change on society,” according to Unesco.

Such climate change is no stranger to present time, with global warming threatening habitats worldwide.

Although the heritage status of Mapungubwe is secure, mining activity close by will have to be stringently regulated to preserve the historic site.