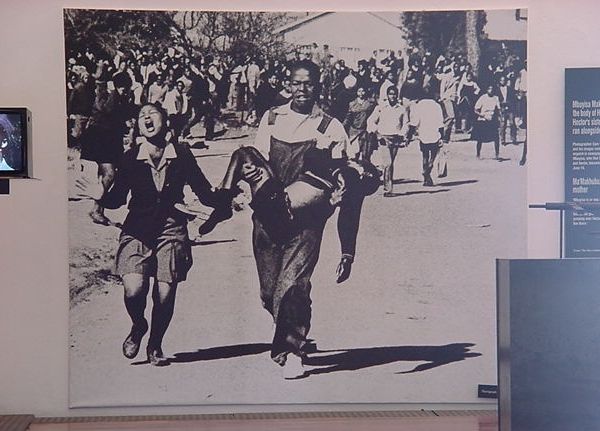 Antoinette Sithole, Hector Pieterson’s sister, finds that schoolchildren want to touch her to see if she is real, once they have heard the story of 16 June 1976, and see the famous photograph of her running alongside Mbuyisa Makhubu, who was carrying the dying 12-year-old Hector in his arms.

“They find the story unbelievable,” she says now, 38 years later. On that fateful day, police opened fire on thousands of schoolchildren who were protesting against Afrikaans as a medium of instruction in township schools. Hector was the first child to die on the day, in uprisings that spread across Soweto and the country in 1976. By the end of the year, there had been more than 500 deaths around the country.

Sithole now gives tours at the Hector Pieterson Museum in Orlando West in Soweto, built just a few blocks from where her brother was shot. The children say that the event happened a long time ago, and it’s hard to believe it took place. “They just keep on touching me – I am the past and the present, and it is very exciting.”

It is striking that the children of today don’t appear to have unity, she says; she explains to them that back in 1976 children supported one another; they had a sense of unity. “Now children do drugs, and there is teenage pregnancy, and they don’t take a stand. They are living in another world.”

She has told the story thousands of times of how she joined the march of up to 15 000 schoolchildren, on their way to Orlando Stadium to discuss their grievances. About having to repeat it almost every day, she says: “At first I could not talk about it, but I am part and parcel of the story. I now feel honoured and proud to talk about our history.”

Tensions in schools had been growing from February in 1976 when two teachers at the Meadowlands Tswana School Board were dismissed for refusing to teach in Afrikaans. Efforts to make representations to the education authorities were rebuffed, and in mid-May about a dozen schools went on strike, with several students refusing to write mid-year exams.

On 16 June, students from three schools – Belle Higher Primary, Phefeni Junior Secondary, and Morris Isaacson High – marched but before they got to the stadium, the police met them, in Moema Street. No one knows who gave the first command to shoot, but soon children were running in all directions; some were left lying wounded and dying on the road.

The museum, opened in 2002, captures in graphic photographs, posters, TV footage and artefacts the events of the day, together with eye witness accounts. A series of ramps leads the visitor into the belly of the museum, where one is finally confronted with the famous photograph taken by The World photographer Sam Nzima. He took a sequence of six photographs of Makhubo carrying Hector and putting him a car. He was taken to the nearby Phefeni Clinic, where he was pronounced dead. The photographs were splashed across the front pages of newspapers around the world, and Hector became the symbol of apartheid repression.

Sithole takes overseas visitors through the museum, and says that they cry when they hear the story. “They say I am brave, that they couldn’t talk about it. But I am not angry, I have learnt forgiveness.”

She remembers the events “just like yesterday”. But on the other hand, sometimes she doesn’t believe the story herself, as if she is watching a movie, she adds. Sometimes she is restless, and would like to have “me time”.

Recently turned 54, “every birthday to me is very, very important” she says, “because if my brother hadn’t have died, it could have been me”. She gives talks around the country, and has been invited to speak in Europe, Canada and the US. She gives credit to her mother, as the one who is strong. “Whatever happened to her she accepts.”

Seventy-one-year-old Dorothy Molefe says she still misses her only son, who would be 50 this year. “I miss him a lot, we were very close, he was like a brother to me. I miss the jokes, the teasing. He was clever, jolly, always smiling.” And because he was her only son, it was harder for her. “I don’t even think of how old he would be now.”

Molefe still visits his grave in Avalon Cemetery, in Soweto. “I think of the memories of when he was alive.”

Back in 1976, it took three weeks to get Hector’s remains from the mortuary. “He was the last one of the children to be buried,” she said in 2005. She found the funeral “very hard”. “I didn’t want to be too sad, in case everything didn’t go right.”

Hector was one of six children; Molefe had three daughters and a son with her first husband, and two daughters with her second husband. Since Hector’s death, she has had to bury a second child: in 1997 her 15-year-old daughter, Debbie, died in a car accident. She has 12 grandchildren – her son would probably be a grandfather today, if he’d lived.

The apartheid government was jolted by the event. The immediate consequence was that Afrikaans as a medium of instruction was dropped. More schools and a teacher training college were built in Soweto. Teachers were given in-service training, and encouraged to upgrade their qualifications by being given study grants. But the most significant change was that urban blacks were given permanent resident status in South Africa. Previously they had been considered “temporary sojourners” with permanent residence only in the designated homelands, far away from industrial centres and jobs.

The hunt for Makhubo

The 18-year-old Makhubo was harassed by police after the incident and eventually went into exile. His late mother told the Truth and Reconciliation Commission in the mid-1990s that the only communication she received from him was a letter he wrote in 1978 from Nigeria. According to the Mail & Guardian, he is believed to be still alive and detained in a Canadian jail on immigration charges.

The newspaper reported on 13 June: “Last year saw the failure of a Department of Arts and Culture-initiated project to repatriate a man – believed to be the very same Mbuyisa Makhubu – detained in Canada for 10 years on immigration charges. The DNA results into his identity were pronounced inconclusive. But for the Makhubu family, hope remains.”

The Citizen newspaper reported the following day: “[The department] is in the process of clarifying the situation regarding DNA tests done on a man currently in Canada that some maintain could be Mbuyisa Makhubo.”

The man has been imprisoned in Canada for a decade on immigration charges, claiming his name is Victor Vinnetou. In its report, the Mail & Guardian said that according to detention review transcripts supplied to it by Canada’s immigration and refugee board, “the detainee in question has been living in Canada since 1988 and has been detained there since 10 August 2004. He assumed multiple identities since arriving in Canada and has the symptoms of a mental health disorder.”