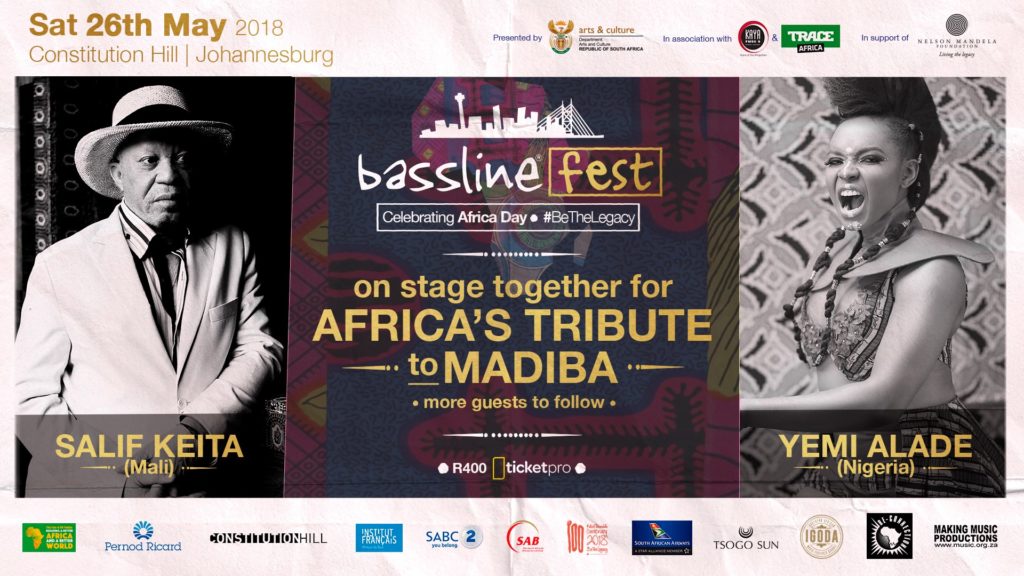 Brand South Africa is proud to participate in the BASSLINEFEST in celebration of Africa Day. The BASSLINE FEST officially announces two of the headline artists for the weekend of 26th and 27th May will be none other than African greats Salif Keita from Mali, and pop phenomenon Yemi Alade from Nigeria.

With more artists being announced regularly, the festival’s line up is growing from strength to strength and has now officially announced artists from afield Brazil, France, Japan, Cape Verde, Guinea, Mozambique, Reunion Island, Mali, Nigeria and of course South Africa.

The artists are all part of the celebration that unites and pays homage to our continent and in particular this year, to the legacy that is Nelson Mandela. The two artists that have been selected as ambassadors from Africa to celebrate Madiba’s legacy are Yemi Alade and Salif Keita, who collectively will perform in an exclusively crafted performance to pay tribute through not only their own songs, but also a duet and a further composition entitled “Africa’s Tribute to Mandela”.

The BASSLINE FEST will be the only opportunity for one to witness the duet and add even more exclusivity to this already rare world-class lineup.

Salif Keita is one of the continent’s most beloved Afro-pop artists. Having been ostracised for his albinism as a younger adult, he immersed himself in music before moving to Paris where he has resided since 1984, honing his craft and becoming one of the most prolific stars from Africa. Known as the ‘golden voice’, Salif has released over 20 albums with some of the biggest record labels in the world.  He has toured the globe extensively and known as one of West Africa’s finest composers and singer.  BASSLINE FEST is honoured to be able to add him to the line-up in 2018.

Yemi Alade is one of the younger pop stars from Nigeria that is currently making huge waves across not only Africa, but in parts of Europe too.  As a winner of the talent show, Peak Talent in 2009 she subsequently released the smash hit Johnny, which saw her becoming a house-hold name almost instantly.  She has followed it up with similar styles of dance pop combined with her signature humorous lyrics.  Despite her massive stardom, Yemi has released three albums, and has shared stages with acts such as Mary J Blige, Wizkid, M.I., Waje and many others.  We are excited to see her on South African soil.

The other confirmed artists for BASSLINE FEST, all previously announced, are as follows:

More artists are being booked for the festival on a regular basis.

Now in its 14th year as the only Johannesburg-based Festival that celebrates African unity and diversity, BASSLINE FEST will be held over 2 full days for guests to enjoy music platforms and great food as well as a Nelson Mandela day tour “Footsteps of Mandela”. Dialogue will also be held to promote social cohesion across the continent.

The music and food festivities kick off on Saturday the 26th May from 3pm to 11pm with two stages, both featuring top tier artists from not only the African continent, but from across the globe.  The Sunday fest times are 12pm to 7pm.

SABC2 will broadcast live from the Fest between 8pm and 11pm, reaching a sizeable television audience.

Tickets can be booked at www.ticketpros.co.za now for R400 per day.

BASSLINE FEST has also put together travel packages for guest coming from afar and a Footsteps of Mandela tour.