An artist of Knysna shares of how his childhood in the bush, and learning indigenous traditions led him to his passion: a career in art. He also uses this to help rehabilitate young offenders. 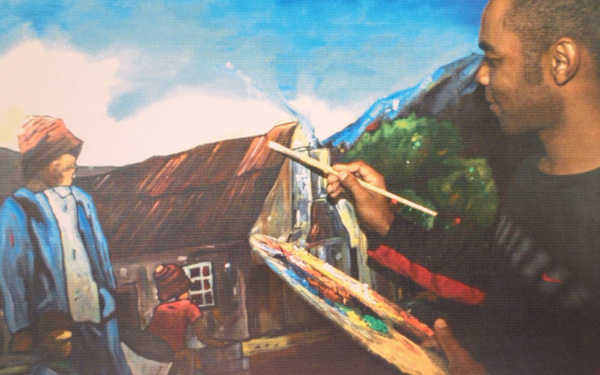 Stanley Grootboom says his biggest motivation to succeed is people telling him that he cannot do something. (Images: Supplied)

A South African man who tells the stories of the country’s first inhabitants and their descendants through art, is planning to launch Khoisan Footprint Cultural Tours next month.

He is planning three tours, which will take in heritage sites of South African indigenous people. The trips will include Knysna, on the Garden Route, as well as Northern Cape and Western Cape.

Stanley Grootboom, who comes from Coldstream in Eastern Cape, exhibits his art at the Cradle of Mankind cultural village at Tsitsikamma’s Khoi-San village, outside Knysna, and with the Knysna Art Society.

In his art, Grootboom focuses on the indigenous people of South Africa – the Khoi and San. He depicts their stories in paintings, sculptures and illustrated books, and says he plans to bring out more literature about interviews he has done with their modern-day descendants.

He has published an installation book and a CD on an art course he designed. The former, published in 2003, was made out of recycled material such as plates and hinges. At the time, he was a member of a group of 40 artists hosted for a project by the gallery of the University of North West.

In its 32 tin pages, the book tells the story of a young Khoi San boy. He is planning to publish another three books, as well as colouring in books. 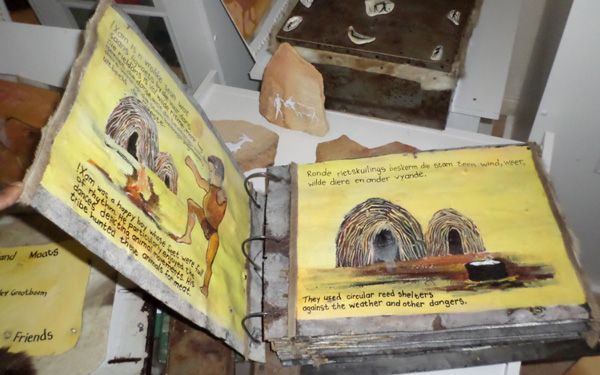 This tin book was published a few years ago.

When he was a child, nature was Grootboom’s playground. “I grew up in Coldstream. In Tsitsikamma, we used to dive in the river bottom,” he says. “I remember when I was about seven years old, I picked up drift wood and allowed it to dry on my pigeons’ cage. Later I used it to make sculptures.”

The children would also collect black rocks, which they would burn and use as skin lotion. “We used it so that we didn’t get sunburn.”

Grootboom says that in high school art was not offered as a subject. “I grew up disciplined. You were told what to do and what to study. That’s why I started playing competitive chess. I used to go to the library and research the chess masters.”

He matriculated from Knysna Senior Secondary School, in Western Cape, in 1992. And although art was in his blood, he wanted to study law. “I saw a lot of bad things happening to my people, so I planned to help them in the villages as a lawyer. When I studied law at the time, I realised that things are better now in the new South Africa.”

He started researching more about his ancestry and gave up on law. “There [are] a few subjects I must still finish.” Art became his focus. 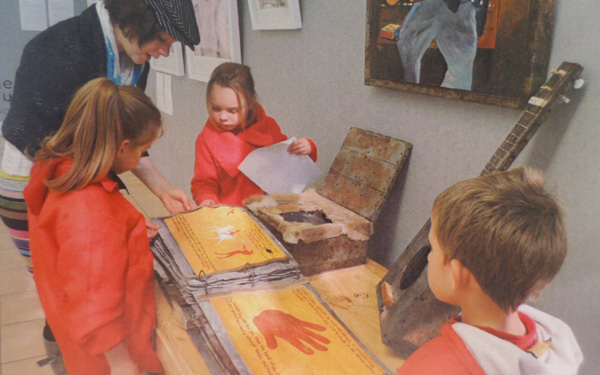 Stanley Grootboom often showcases his artwork as form of protest to highlight societal issues. This exhibition was held at the North West University.

The value and merit of art

“I was discouraged by many people that I would be a very poor person if I become an artist. A lot of people said this, because they heard this from someone. They were not exposed to these things and had a lack of information.

“A lot of us are uneducated about the value of art, and its cultural merits,” says Grootboom.

But these cautionary words from naysayers did not dampen his passion to succeed as an artist. “When people tell that I cannot do something, then I feel like I have to prove to them that I can do it. That is my biggest motivation. Negative things people say motivate me.”

He was indeed motivated by art and his heritage and culture, and got a job at the Department of Arts and Culture, where he worked for 12 years. He also facilitated workshops for the Department of Social Development.

In his pursuit of the stories of his people, in 2003 Grootboom started walking with a voice recorder. He interviewed people from old forestry villages such as Krakeelriver, Coldstream, Clarkson, Gamtoos and Fairview. “I realised that there are things people still do [traditionally] even if they do not know it was passed on from their ancestors.

“They do still do the things but do not know it is Khoi. For example, they dig a hole in the ground [when sleeping outside] and throw a gooiing sak over them,” says Grootboom. A gooiing sak is a hessian bag.

“They use the Khoi plants. Like using the plant burned to keep away bad spirits is called the ‘imphepho’ by the Zulus, but that is a borrowed tradition of the Khoi.”

Grootboom says it took him about 25 days to do the survey, but it is not complete. “I still do the interviewing. It is my social responsibility.”

A writing workshop at the Afrikaanse Taal- en Kultuurvereniging, the institute dedicated to the study and preservation of the language, prepared him to write and do the illustrations for his books.

The 40-year-old Grootboom also gives art classes to underprivileged people in Knysna. “We didn’t have art in high school. I know a lot of people have the talent, but they cannot afford the classes. I know it’s my social responsibility [to help them], because I have a lot of influences.”

His focus is mostly on people of the northern areas, but if anyone else comes that is not from that area, he does not turn them away. “My focus is on the previously disadvantaged.”

By giving these art classes for free, Grootboom believes he is giving back. “You get blessings (rewards) in other ways,” he explains.

In the past two years that he has lived in Knysna, Grootboom has taught 25 people in his art classes. “I taught about 30 people in Tsitsikamma. There is an artist in Humansdorp – Thinus Galant – who regularly gets mayoral awards for his artwork. He was one of my students.” 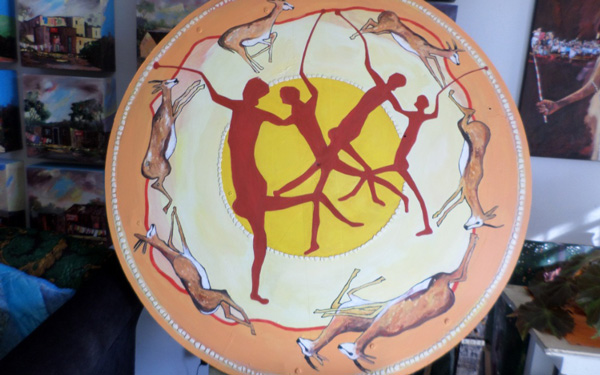 Stanley Grootboom uses art as a form of rehabilitation.

About three years ago, Grootboom trained 10 teens, aged 12 to 18, through the Department of Social Development. The best repayment for that experience, he says, was that the parents of the juveniles came to visit him afterwards to give him good news.

“One mother in the beginning said that she could not get her child off dagga… There was a time where that boy, who is 12 years old, took out dagga and drugs out of his socks, and I had him give it to the social worker,” explains Grootboom.

“After the art classes, parents said that the juveniles started washing dishes at home. The children’s behaviour also bettered at home: they would greet their family members and ask how their days were.

“I felt like I got something right after I heard that.”

Grootboom believes that art is very therapeutic. “On school I used to have a bad temper. I thought chess would help. It was only when I did art that my bad temper went away. These days you will struggle to get me angry.”

There is a need for uniqueness in your art, he says, because the internet gives you so much. “You have to identify what is important. It’s not going to help you anyway if you imitate someone.

“If your artwork is really good, it will make someone stop in their tracks. There should be emotional content in your artwork. The theme, consistency and technique [are] important.

“You should bring something that is close to you, then you can bring out the emotion,” says Grootboom. “If you work hard enough in art, you can make it work.

“I think if you want to go into art as a career, you should study business management or equip yourself with business skills,” he advises. “That way you won’t get exploited by an agent. You also have to learn about marketing.”

It is also helpful to do a course in computers, he adds.

For more information about the artists, contact Stanley Grootboom on sgrootboom774@gmail.com.