Whenever South Africa is on a sports field, the fiercest rivals always come from Australia. When both countries put on their green and gold colours, encounters usually turn into dogfights. With Australia being the co-hosts for the upcoming Cricket World Cup, we look back at the history of this bloodthirsty rivalry in various sports. 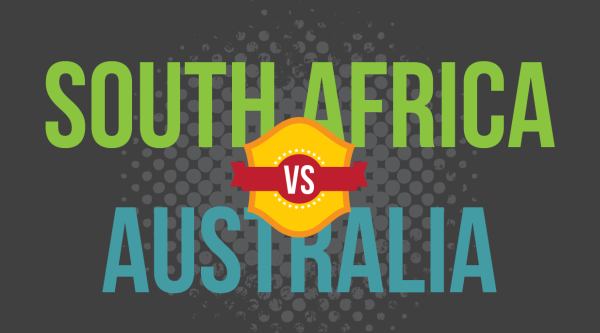 South Africa and Australia’s sports rivalry can be traced back to 1902, when the two first faced each other in test cricket match. Since then, both countries have been at each other’s throats in various sports, from rugby to swimming. (Image: Brand South Africa)

South Africa’s biggest sports rival is, without doubt, Australia. Matches between the two nations across most sporting codes are scorching affairs where the results are unpredictable. The Aussies even wear green and gold, like the South Africans. They may be hated, but they do bring out the best in our sportsmen and women.

Most of the competitiveness is concentrated in rugby and cricket, but it’s not unusual to find the two countries also pulling each other’s hair in the swimming pool or on the hockey field or netball court.

In a Fox Sports opinion piece published in 2014, Australian writer Antony Pinshaw admitted that South Africa was Australia’s biggest rivals in world sport. “We love to beat the Kiwis and rejoice when we roll the Poms, but it is fair to say our fiercest sporting rivalry is not either of these nations… The Rainbow Nation is our fiercest rival.”

He goes on to talk about the clashes between the countries in rugby and cricket, and even compares the countries’ sportspeople. “From netball and football to swimming and lawn bowls, our two nations seem to bring the best out of each other. And for every one of our great sportspeople, they seem to have an equivalent. We have Greg Norman; they have Ernie Els (and Gary Player). We have Susie O’Neill; they have Penny Heyns. We have Tim Cahill; they have Steven Pienaar.”

We present to you statistics of games played between South Africa and Australia in rugby union and cricket.

The first test between the two sides took place on 8 July 1933, at Newlands, Cape Town; South Africa won 17-3. The Boks went on to dominate the Wallabies from that period until 1971, winning 21 of the 28 games played. But in 1972, Australia supported the boycott of sporting contacts with South Africa because of apartheid. The two would only meet 20 years later, back at Newlands. And the Wallabies welcomed the Boks back to international rugby with a 26-3 thrashing.

South Africa and Australia first faced each other on the cricket pitch in 1902, when the test in Johannesburg ended in a draw. Since then, the two sides have played 90 mores tests against each other, with Australia winning 50 of those.

Australian great Sir Donald Bradman might have terrorised South African bowlers with the bat during his playing career, but he was the most outspoken against South Africa’s all-white team during the apartheid era.

Bradman opposed South Africa’s tour of Australia in 1971-72 but according to Australian writer and activist Martin Hodgson, Bradman believed South African cricketers were exempt because they had shown their opposition to racism. In a letter to Australian editor Rohan Rivett, he wrote: “They have tried harder than our protesters to do something about it. I cannot see why they should be blamed for the attitudes of a government with which they disagree.”

Bradman even flew to South Africa to meet the then prime minister, John Vorster, to discuss the issue. When he asked the reason for leaving out black players in cricket, Vorster said they were intellectually inferior and would not cope with the intricacies of cricket. Bradman asked Vorster: “Have you ever heard of Garry Sobers?”

Back in Australia, he announced that they would not play South Africa until it had chosen a team on a non-racial bias. The two sides would not face each other again until December 1993 in Melbourne.

No South African who watched the 1999 World Cup semi-final will ever forget it when Lance Klusener slogged South Africa into a winning position. With one run to win, a wicket remaining and three balls to spare, Klusener struck the ball and ran for the single but Alan Donald did not follow up. It was a heart-sinking moment when Donald, in an attempt to reach the other end, dropped his bat and was run-out, giving Australia a place in the final.

Seven years later, Wanderers Stadium in Johannesburg was host to one of the most thrilling one-day encounters in cricket history. On 12 March 2006, Australia set the highest total in one-day cricket history at the time of 434 runs. And then South Africa surpassed that total in the same game, setting a new record of 438 runs. 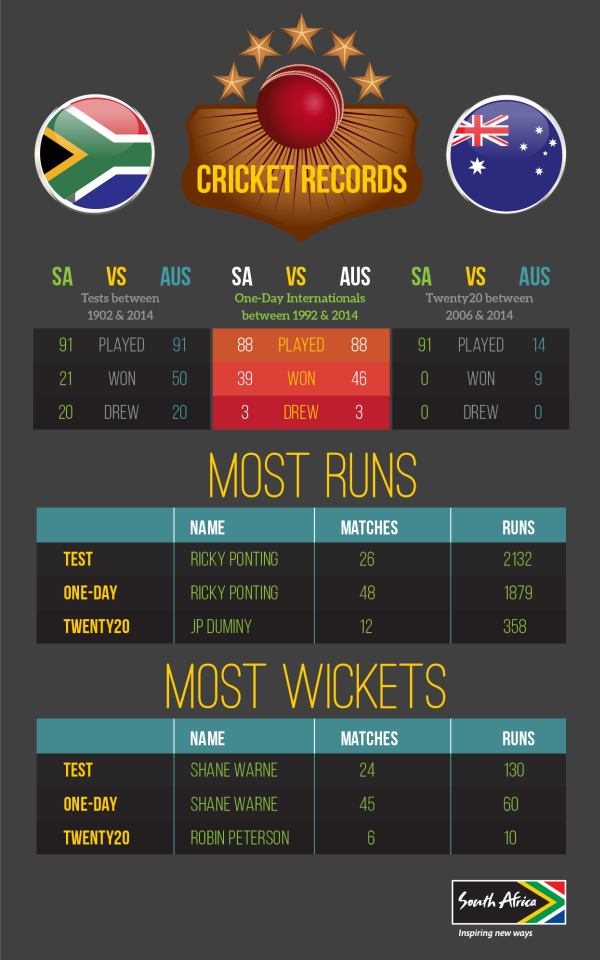 Australia has gladly taken South African sporting talent and made them theirs. Some of the three athletes, though, chose to play for Australia as a way to escape apartheid South Africa.

He retired from the national team in 1986, expressing his disillusionment with Australian cricket. But six years later he found himself back in the international test frame as South Africa’s captain after the country was reinstated into the International Cricket Council.

Durban-born rugby player Clyde Rathbone played centre for the Wallabies 26 times. However, before making his mark in Australia, he captained the South African under-21 side to victory in the 2002 u-21 Rugby World Cup and for KwaZulu-Natal side the Sharks in the then Super 12.

At the end of 2002, he moved to Australia and qualified to play for the Wallabies by virtue of having an Australian-born paternal grandmother.

East London surfer Wendy Botha also traded her South African colours for those of Australia. A four-time world champion, she won her first title as a South African in 1987. But after adopting Australian citizenship to avoid travel restrictions placed on the apartheid government, she went on to win three more in 1989, 1991 and 1992.

Botha earned widespread fame when she posed nude for the September 1992 issue of the Australian edition of Playboy magazine, earning the magazine its first sold out issue.

In 2009, Botha was inducted into the Surfing Walk of Fame in Huntington Beach, California, as Woman of the Year.