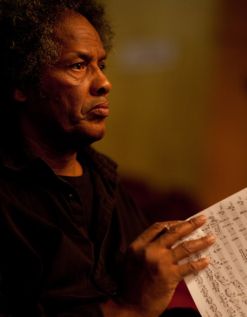 Mac McKenzie is “a guardian of goema music and its greatest innovator to date, re-imaging the boundaries of this style”.
(Image: Steve Gordon) 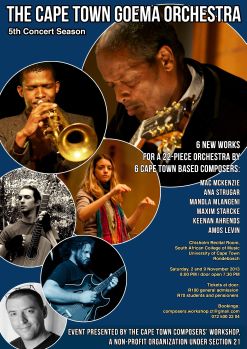 “If you take a pinch of Khoi-San lament, a dash of Malay spice, a measure of European orchestral, a splash of Xhosa spiritual, the clash of marching bands, the pizzazz of the Klopse, a driving primal beat and lots of humour and musical virtuosity, what do you get? Goema, Goema, Goema!”

So goes the description of goema music by www.profoundlysouthafrican.com, a goema music website. “Klopse” is originally a Dutch word, meaning “club” – now the expression “Kaapse Klopse” refers to the goema music troupes.

Goema music is a distinctively Cape Town-based music, originating in the annual New Year’s minstrel carnival, a celebration of the end of slavery in the 1830s, and held for the past 100 years or so. Cape coloured minstrels dress up in multi-coloured trousers and jackets, paint their faces and march with their musical instruments through the city streets, in dozens of troupes, competing with each other. The banjo and guitar feature prominently in their music, with musicians playing classic Afrikaans folk songs such as Daar kom die Alabama, and Bobbejaan klim die berg, which probably had their roots in the melting pot of early slave cultures.

Slaves were brought to the Cape in the mid-17th century from Mozambique, Zanzibar, Madagascar, India, Ceylon (now Sri Lanka), and Indonesia. They brought their varied languages and cultures, and their musical instruments and lively songs.

A goema is a drum made from a small wooden wine barrel from which the lid and the base have been removed. An animal skin is stretched over one end of the barrel and the result is a portable, resonant drum. The word possibly originates from “ngoma”, a Swahili word for “drum” used by slaves to the Cape, particularly those from Zanzibar.

In the past few years, 62-year-old McKenzie has taken the minstrel street music and turned it into orchestral music, teaching himself to write music along the way, in what he calls “symphonic goema”. He runs two orchestras – the Cape Town Goema Orchestra, and the Friendship Orchestra, based in Basel in Switzerland.

The Cape Town orchestra is made up of around 22 musicians, playing a range of instruments, from violins and cellos, to trumpets, trombones, saxophones, flutes, a double bass and a mandolin.

He composes for the orchestras, and conducts several concerts in Cape Town and Basel each year. He has presented three major works: Goema Symphony No 1, Table Bay Concerto, and South Atlantic Suite.

“I will show them where goema music is going,” he says. And it’s going to launch a “global attack”, growing the orchestra in Europe, where, besides Switzerland, McKenzie wants to conduct in Holland, Germany, Sweden and Denmark.

Music in his veins

McKenzie hails from humble beginnings, growing up in the Cape Flats township, where he still lives. He says he was always composing music in his head, and when he finished school, he said to his father that he wanted to make music, to which his father said: “You must be mad.” So he trained as a draughtsman but eventually followed his heart.

His father was a talented musician, and outside of working as a labourer his entire life, his played the banjo and coached the Cornwalls carnival troupe; and in “two years turned them around from being hopeless hobos and hookers to a tight musical unit”, according to www.music.org.za.

“Music is in my veins,” says McKenzie, as he barp-barps a tune over the phone. He first performed professionally in the early 1970s, playing a range of styles and becoming a regular on the local jazz scene as a guitarist. In the mid-1980s he established a goema rock band, The Genuines, which drew “a crossover audience and broke new ground”. The band recorded four albums – Goema (1986), Mr Mac and the Genuines (1987), Nights with the Cape Gypsies (1989), and Chasing the Voodoo (1991), which he says achieved international success.

McKenzie was the resident composer-performer at the District Six Museum in Cape Town in the late 1990s and recorded the album Namaqua. The Goema Captains of Cape Town in 2003. It featured what he calls “penthouse goema”, arrangements with a sophisticated and mellow jazz feel.

He formed the Cape Town Goema Orchestra in 2010, and spends much of his time composing for it. He is also the director of the Cape Town Composers’ Workshop, an incubator for emerging Cape music composers, which aims to “promote and enhance the creation of musical works by Jazz composers from Cape Town, especially Athlone [a suburb of Cape Town]”.

Compositions played in their November season included works by Capetonian Keenan Ahrends, the youngest of the composers. Mandla Mlangeni, Maxim Starcke and Serbian-born Ana Strugar return with new works for their third appearances in the orchestra, while Amos Levin makes his Goema Orchestra debut. McKenzie will play a piece entitled Cape Dance Variations.

The workshop aims to “to elevate the profile of home-grown orchestral talents and foster a truly representative South African oeuvre”.

“Approaching music with this fresh and bold premise, the Goema Orchestra prides itself on being a classical ensemble that grooves,” according to a press statement from the orchestra.

The workshop organisers are planning to take a group of goema orchestra composers to Switzerland in early 2015, while McKenzie will do three concerts with the Swiss orchestra next year.

McKenzie has featured in the award-winning documentary Mama Goema. Several of his albums are available at the African Music Store in Cape Town.