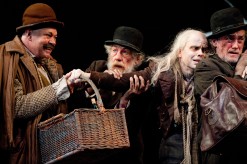 The play performed to a packed house in
the Cape Town township of Khayelitsha. The
appreciative audience was admitted on a
pay-what-you-can basis.

When Samuel Beckett’s Waiting for Godot – a play in which the second act is a distorted mirror of the first – was first performed in the 1950s, a bemused critic wrote: “Nothing happens, twice”. Yet that same reviewer (Vivian Mercier) also acknowledged that the playwright “keeps audiences glued to their seats”.

Indeed, Waiting for Godot subsequently became one of the most celebrated and widely performed plays of the 20th century. So “nothing” has been happening an awful lot on stages across the globe over the last five decades.

Vladimir and Estragon, two down-and-out tramps, wait under a dead tree on a nameless road for the appearance of a mysterious Mr Godot.

With only one another’s company to relieve the monotony of their (ultimately unfulfilled) expectation, they pass the time bickering and singing, remembering and complaining, laughing and crying, until they encounter another duo desperately searching for meaning: the master-and-slave Pozzo and Lucky.

“Didi” and “Gogo” – nicknames demonstrating the intimacy of their relationship, despite their constant disagreements – are by turns clowns and poets. They are preoccupied by physical discomfort, but every so often they voice profound metaphysical questions. Godot is an enigma because these questions are never quite answered … unless, of course, the answer is “nothing”.

“Nothing” happened in South Africa for two weeks between 31 July and 14 August – twice, every night, at the Fugard Theatre in Cape Town.

Directed by Sean Matthias, the production’s major selling point was the appearance of Sir Ian McKellen: “Gandalf waits for Godot”, as one newspaper headline recently put it (alluding to his wizardly role in the Lord of the Rings trilogy of films). Matthias and McKellen have worked together on various projects over the last thirty years, and their creative partnership is justifiably acclaimed.

But Waiting for Godot is not a one-man play, and it is somewhat short-sighted to give McKellen the sole billing; after all, he shared the stage with the equally distinguished Roger Rees (who, like McKellen, is an established Shakespearean actor), Matthew Kelly and Brendan O’Hea. The production has toured internationally, and the Cape Town performances marked the end of a two-year run.

Unsurprisingly, this particular Godot has been hailed as the best yet seen in South Africa, evincing both the light comedy and the heavy pathos to be found in Beckett’s script. This description is only possible, however, precisely because there is such a long local tradition of performing the play.

Galgut has suggested that “this is not a society, for obvious historical reasons, that has been given to existential musing about the larger meaning of life … we have been very caught up in urgent and immediate questions, so Godot is a step into territory that SA theatre has tended not to look at”.

This assertion is not self-evident. Instead, one may argue, the political oppression and material privation either directly observed or personally experienced by South African theatre-makers ought inevitably to lead to wider “existential” questions. Why do human beings treat each other the way they do? How can life be made meaningful in what seems to be an absurd, cruel, unjust universe?

Many of the plays of Athol Fugard, for instance, depict characters facing dilemmas that are the result of both specific socio-political conditions under apartheid and the universal “human condition”.

Fugard has acknowledged his debt to Beckett; one could even go so far as to say that we wouldn’t have had Boesman and Lena (1969), or Johnny and Hester from Hello and Goodbye (1965), or even the prisoners in The Island (which Fugard co-wrote with John Kani and Winston Ntshona in 1973), were it not for the disenfranchised pair of Vladimir and Estragon.

The casting of two “coloured” actors in these roles in Galgut’s production earlier this year was significant to many audience members, who identified the characters with the thousands of homeless and ostracised “coloured” people living in the Western Cape.

A more deliberate attempt at making South Africa’s fraught history of race relations part of the subtext of the play was seen in 2002, when Lara Foot Newton directed Waiting for Godot – in Africa. Here, Lionel Newton and Seputla Sebogodi teamed up as Didi and Gogo, with Robert Whitehead and Bheki Vilakazi as Pozzo and Lucky.

Generations of South African thespians have grappled with the text. As early as 1962, Fugard himself directed a production of Godot starring Cornie Mabusa, David Phetoe and Gilbert Xaba. Some twenty years later it was the turn of young actors who would later become household names, such as Bill Flynn and Pieter-Dirk Uys. Another two decades after that, a group of inmates at Pollsmoor Prison put on their own version of Godot.

It’s clear that South African performances of Waiting for Godot have manifold local inflections. In fact, this is true of various other works by Beckett.

The Mechanicals, a group of Cape-based theatre practitioners whose repertory seasons of iconic texts have started to develop a popular following, are currently performing Endgame at the Intimate Theatre in Cape Town until the end of August.

This play, which Beckett once described as a kind of companion piece to Godot, centres on a master-slave relationship of mutual dependence and resentment – the unfortunate Clov scuttles around a room doing the bidding of the tyrannical but helpless Hamm. Endgame also examines the problems of memory (the recreation and disavowal of the past) and confronts the bleak prospect of apocalypse.

At the National Arts Festival in Grahamstown in 2009 and 2010, Irish husband-and-wife team Conor Lovett and Judy Hegarty Lovett introduced South African audiences to their theatrical adaptations of some of Beckett’s prose writing.

Like the plays, these works contain that inimitable Beckettian blend of black humour and grave pessimism. But always, in the background of his characters’ personal troubles and psychoses, are national questions. Beckett’s troubled relationship with his Irish homeland is too complex to discuss here; but it is worth bearing in mind that the story of Ireland is, in many ways, the story of a liberation struggle against a colonial oppressor.

Perhaps, then, it’s not too surprising that Beckett’s work – even though it can be obscure and opaque – strikes South African audiences with a particular resonance. No doubt this latest Godot will soon be followed by another production of the famous play; so, even if you missed McKellen and company, you won’t have to wait too long.