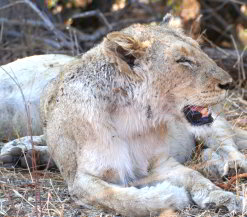 Lions and other regional carnivores now
have added protection through the efforts
of the Endangered Wildlife Trust and the
Golden Lions Rugby Union.
(Image: Luke Harwood)

The Gauteng-based Golden Lions Rugby Union (GLRU) has teamed up with the Endangered Wildlife Trust to boost conservation efforts in 2012. This makes the Lions the first professional rugby team to formally enter into a conservation project.

According to GLRU public relations manager Krystle Geach, the main focus will be on saving South Africa’s carnivores, but the team will also give prominence to the protection of rhinos.

The venture, announced in October, is expected to give extra impetus to the Endangered Wildlife Trust’s (EWT) efforts, and bring the concept of conservation to a whole new audience.

The GLRU, which also undertakes social responsibility projects such as developing rugby facilities in townships, was approached by the EWT and wasted no time in agreeing to the partnership.

Vanessa du Plessis of the EWT said that the project would communicate the NGO’s mission and vision powerfully and efficiently, and because there are so many sports fans in South Africa, the message will be spread far and wide.

It is hoped that the partnership will increase conservation awareness through the GLRU’s website, its social network sites Facebook and Twitter, and the newsletter that is sent out fortnightly during the rugby seasons.

In addition, the EWT will keep fans up to date on their projects and events via the Lions magazine, which is distributed five times a year to ticket holders and is also available in various retail outlets.

And to drive the message home, EWT news will appear in match day programmes, while announcements and images will also be displayed on the big screen in stadiums on match days.

The EWT was established in 1973 with the aim of promoting a healthy planet and a world that values and is able to sustain its diversity of life. The organisation’s mission is to protect threatened species and ecosystems in the Southern African region.

Through some 80 projects across the region, the EWT is helping to preserve wetland ecosystems, reduce conflicts between humans and wildlife, and more.

Current projects include the Airport Wildlife Programme which aims to increase aviation safety by reducing bird strikes; and the Healthy Rivers Programme, which focuses on the conservation of freshwater species and ecosystems throughout Southern Africa.

One of its most important projects is currently on many minds locally and abroad – the rhino poaching crisis. In addition to working in the field and with like-minded organisations, the EWT, through its partner Afrika Force, has produced a fashionable beaded bracelet that is sold at a number of retail stores around South Africa.

The bracelets provide an easy way for people to support rhino conservation, and bring in an income for the men and women who make them.

There is also the precarious situation of endangered carnivores, such as the African wild dog, whose population in South Africa now numbers less than 400 individuals. At the same time, the lawful and unlawful trading of leopard and cheetah is negatively impacting on the existence of these big cats.

The EWT’s Carnivore Conservation Programme aims to conserve predators by securing new habitats, conducting vital research, and addressing important problems such as the trade and illegal killing of these threatened animals.