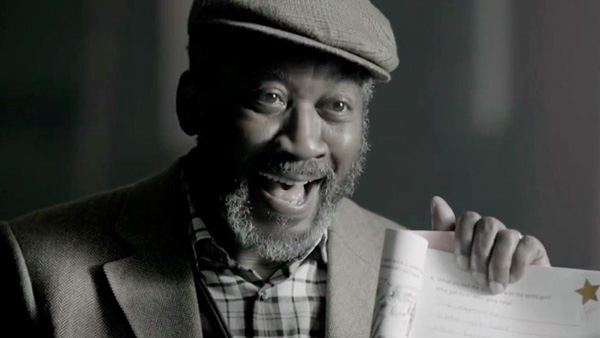 A still from the TV commercial The Reader. (Image: Bell’s Whisky)

• So this giraffe walks into a restaurant … and the video goes viral
• Across the Colour Bar: Nthabiseng’s story
• Watch: Global video reactions to Nelson Mandela’s death
• Buy Back South Africa, save and create jobs

A new South African TV ad for Bell’s Whisky that tells the story of an old man learning to read has won kudos from the international media as “more heartwarming than most Super Bowl commercials”, “the most inspiring ad of the new year”, and “the best commercial for literacy (and scotch) ever made”.

The video, thought up by Cape Town-based agency King James and directed by Greg Gray of Velocity Films, launched on South African television channels on Sunday 2 February – the day before the US Super Bowl, whose commercial breaks are the global prime-time for ad space.

The reason for his mission to learn to read is only uncovered at the end of the ad, and best revealed by watching it:

“In The Reader we strove to create a storyline that would engage and inspire South Africans across the board,” says Devin Kennedy, executive creative director at King James. “The commercial celebrates universal themes such as friendship, family and community as well as the extra special things we do for each other.”

In less than a week The Reader has already grabbed the attention of the international advertising industry, and garnered nearly half a million YouTube views.

“This whisky ad from South Africa is more heartwarming than most of the Super Bowl commercials,” wrote David Gianatasio in Adweek, the prestigious New York-based ad industry publication. “Scotch whisky brand Bell’s and ad agency King James might just lift your spirits with this South African ad with an elderly man struggling to overcome his illiteracy so he can celebrate a family milestone.

“Director Greg Gray of Velocity Films employs a restrained cinematic style to show The Reader diligently practicing his A-B-Cs at every opportunity … the heartfelt acting and storytelling are strong enough to yield a potent emotional payoff.”

Business Insider said it was “by our estimation, the most inspiring ad of the new year”.

“Slowly but surely, the man’s reading improves, and the ad delivers its extraordinary emotional payoff — right as the music hits its stirring crescendo.”

Buzzfeed staff writer Isaac Fitzgerald described it as “the best commercial for literacy (and scotch) ever made”: “It’s a rare commercial that brings tears to your eyes, but the folks at Bell’s Whisky South Africa have done just that. Hugs and gold stars all around.”