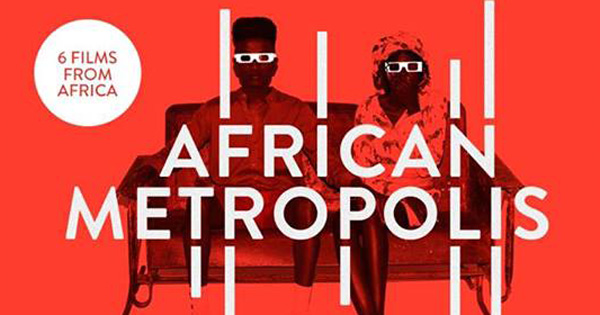 These films will be shown at the independent cinema, Bioscope Maboneng, from 9 to 18 May. The series will then head to the Labia in Cape Town. An initiative of the Goethe-Institut South Africa and South African executive producer Steven Markovitz, the African Metropolis Short Film Project was supported by Guaranty Trust Bank and the Hubert Bals Fund of International Film Festival Rotterdam (IFFR).

The Bioscope, in downtown Johannesburg, is an innovative space with the aim of increasing the diversity of content on South African cinema screens. “The Bioscope has helped play a fundamental role in growing new markets for new films, becoming a vital mechanism in developing local audiences for locally and internationally produced cinema,” it says.

Cape Town’s Labia Theatre, in the suburb of Gardens, is the oldest independent art-repertory movie cinema in South Africa.

Abidjan, Cairo, Dakar, Johannesburg, Lagos and Nairobi are the six cities featured in the films. More than 50% of the population of Africa now lives in cities. Urban growth is escalating and transforming, and in African cinema there has been a dramatic shift in the stories told. Once dominated by the traditional, the inner city has now overtaken rural Africa in story themes.

Debunking tired clichés about the continent, filmmakers on the short film project set out to reveal contemporary, cosmopolitan Africa. “There was a long discussion about what constitutes a metropolis,” explains the head of cultural programmes at the Goethe-Institut Johannesburg, Lien Heidenreich-Seleme, on the African Metropolis website: “In the end we chose more cities than we had money for. And we really wanted more North African cities, so we made a point of including Cairo.”

Gertjan Zuilhof, international programmer, and Peter van Hoof, head of the short film programme, at the IFFR, say: “Big city films from African big cities is just what we have been waiting for. It is about time we move on from pre-colonial nostalgia. The best would be if this project could work as a model for the future. Many occasional film projects have been done in Africa – and also Rotterdam had its share in them – but continuation is what is needed. ‘On to the next series’ should be the motto.”

Heidenreich-Seleme defines the Goethe-Institut’s role in the project: “We wanted to change the perception of Africa in Germany, in Europe. Africans are sick of being treated as a continent that needs aid all the time, the images of starving Africans, the sexualised image of the exotic African woman. We started working on changing perceptions outside Africa, but we have also started facilitating inter-African projects, and this feeds into the larger goal of changing the perspective of Africa in Europe.”

Cameron Bailey, the artistic director of the TIFF, adds: “African Metropolis really shows us a new generation of African filmmakers and gives us a glimpse of new talent from the continent. The short films reflect on some of the social realities.”

The films in the African Metropolis programme are:

During a visit to Abidjan, American artist Jean-Michel Basquiat comes face to face with demons, ghosts, doubt and his own death. Basquiat died on 12 August 1988; this film pays homage to him by telling the unknown story of his trip to Ivory Coast. The artist arrived in Abidjan at a time when he was exhausted. Haunted by his ghosts, all his hope lay in this first encounter with Africa.

In a changing world, fitting in is the hardest thing to do. Ghoneimy’s slice-of-life film follows angry young musician Adham through the contrasting landscapes of an ever-evolving Cairo. For Adham, working class with limited opportunities, the city is an arena where the strong survive and the weak fall by the wayside. When he reaches out to an old friend, he finds he has moved on – and up – and the foundation of their relationship is not what it once was. The film is a sharp, poignant comment on the rapidly transforming social environment that is contemporary Egypt.

A housewife in her fifties discovers her true self when she has to accept her husband’s second wife into her home. It is a brave film set in the secret world of multiple spouse households, telling the story of Madeleine and her husband’s new, young second wife. The women develop a relationship far beyond conventional norms. Their intimacy has the potential to blow apart a stable domestic world, but it also has the potential to rewrite the story of both their lives. It is a bold and exquisitely tender film, beautifully acted and sensitively filmed against the backdrop of colourful, beguiling Dakar.

Alone in his high-rise apartment, Aaron Zukerman’s Berea has disappeared. Long after his friends and family have moved on, the Jewish pensioner remains in his inner-city apartment, his world getting ever smaller and smaller, as the city closes in on his memories and happiness. His focus is on a weekly assignation with a kindly prostitute, for which he prepares days in advance. But when her unexpected replacement arrives one Friday, an initially angry response sparks a chain of events that ultimately changes the way the old man sees his world. Berea is a gentle, poetic ode to the power of reinvention.

How far would you go to pay for your sister’s life-saving operation? Ten men in a taxi, strangers to each other, head to an unusual line-up, where they must strip and subject themselves to blindfolds and inspection by a mysterious woman and her charge. Only seven go home that night, big money in their pockets. But what happened to the other three? The ritual is replayed again and again, and the attrition continues. For one man the rumours of how much “the chosen” make spurs him on – he is desperate for the money to pay for his sister’s operation. But what is the price of being chosen? Iwajomo’s spooky, disturbing film confronts the perils of the poverty trap and the abuse of the desperate, in an allegory for the exploited.

Fantasy, science fiction and infatuation fuse as an obsessed neighbour invents ever-stranger scenarios for wooing the girl of his dreams. Nothing is what it seems as Max, a nerdy voyeur, turns fiction into truth and the mundane into the unexpected in his quest to get the attention of Alina, the girl next door. Nairobi is threatened with imminent extinction, and now is his chance to save her and verbalise his unspoken desire. However, a mysterious stranger stands in the way of his happiness. Will Max overcome his fear and save the girl? Is Alina looking for a hero? Homecoming is a quirky, light-hearted look at obsession and the desire to be seen.

African Metropolis attempts to confront and defy stereotypes, and as director Moloi says: “It’s only through films that we can start understanding each other. I sometimes feel that, as Africans, we are harsh to each other, we judge each other a lot, and these films represent Africa in conversation with itself.”