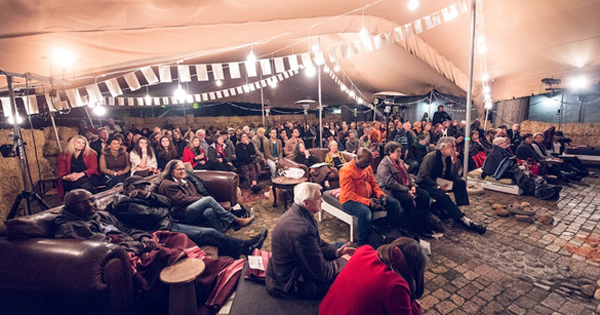 Expected to inspire poets to new generative processes, the second annual festival has an enviable literary line-up of South African and international poets. They will gather to write and talk among the vineyards of Spier Wine Estate in Stellenbosch. (Image: www.spier.co.za)

Wine is bottled poetry, Dionysus said, and his words come to mind around the Dancing in Other Words / Die Dansende Digtersfees International Poetry Festival.

Expected to inspire poets to new generative processes, the second annual festival has an enviable literary line-up of South African and international poets. They will gather to write and talk among the vineyards of Spier Wine Estate in Stellenbosch.

The festival will take place in May, when the poets will explore poetry’s age-old function as “the dreaming vein in the body of society”. Established in 1692, Spier is one of the oldest wine farms in South Africa, and is renowned for its commitment to the arts. Dancing in Other Words is a vibrant engagement of words for lovers of literature and lyricism. Connecting flags and festival, translators and professors, food and fire, violins and mime, this word-fest is curated by the distinguished South African writer and artist, Breyten Breytenbach. He will bring together poets from around the world to combine literary debate with poetry readings.

The mix of global voices will include those whose lives and work exemplify fierce critique of societies as varied as Morocco, Chad and China. On the programme are Homero Aridjis, the Mexican poet novelist, environmental activist and diplomat; Moroccan poet and playwright Abdellatif Laâbi; Chinese writer Duo Duo, one of the celebrated Misty poets; Ukrainian-American poet and translator Ilya Kaminsky; Dutch poet Hans van de Waarsenburg; and Chadian-French poet and novelist, Nimrod.

Local luminaries participating include Henning Pieterse, Mxolisi Nyezwa and Ingrid de Kok, as well as the festival’s musical director, Neo Muyanga, composer and musician. “This is the second year of the festival, and we are delighted to continue in our commitment to honour masters of the written word, providing a platform through which artistic communities can be nourished and stimulated,” says Spier chief executive Andrew Milne.

The poets will spend the beginning of the week together, travelling, conversing and translating. Their journey will culminate in the public festival at Spier on 9 and 10 May. During the festival, the poets will take part in themed conversations each afternoon, exploring issues such as the betrayals inherent in translation, as well as hold master classes. In the evenings, there will be readings accompanied by musical performances inspired by the poets’ work. These will be developed by Muyanga.

Dancing in Other Words is a collaboration between Spier and the Pirogue Collective, of which Breytenbach is a founding member. It forms part of the wine estate’s approach to host leading artists and thought leaders in debate, dialogue and expression.

Homero Aridjis: One of Latin America’s foremost literary figures, this Mexican poet and novelist served as the president of PEN International, the literature and freedom of expression group, for six years and is now its president emeritus. A passionate environmentalist, he is also a former Mexican ambassador to Switzerland and Netherlands. PEN International is a non-political organisation which holds special consultative status at the UN and associate status at Unesco

Ilya Kaminsky: A Ukrainian-American poet, critic and translator who lost most of his hearing at the age of four, Kaminsky teaches English and comparative literature at San Diego State University in the United States.

Abdellatif Laâbi: One of the most prolific and critically acclaimed contemporary North African writers, this Moroccan poet, playwright and essayist received the Prix Goncourt for Poetry for his collected works in 2009. A French literary prize, Prix Goncourt is one of the most important in France. It was created in 1903 and winners are chosen by the Académie Goncourt, a literary society of 10 members.

Duo Duo: A contemporary Chinese poet, Duo Duo is perhaps the best known of the celebrated Misty Poets who practised what came to be called “obscure poetry” in reaction to the Cultural Revolution, the brutal oppression of China run by Mao from 1966 until his death in 1976. Having lived abroad since 1989, Duo Duo returned to China in 2004, where he is now a professor at Hainan University.

Hans van den Waarsenburg: A political poet, Van de Waarsenburg is founder of The Maastricht International Poetry Nights and is an author at Azul Press.

Nimrod: Born in 1959 in Chad, Nimrod is a poet, novelist and essayist who now lives in France, where he teaches philosophy at the University of Picardie Jules Verne.

Ingrid de Kok: De Kok’s poetry is taught at more than 30 universities in South Africa and abroad. She has written five volumes of poetry, and was appointed a Fellow of the University of Cape Town in 2007.

Henning Pieterse: Pieterse’s debut volume of poetry received two of the most prestigious South African literary prizes – the Eugène Marais and the Ingrid Jonker prizes. Pieterse is also a professor and director of the unit for creative writing in the department of Afrikaans at the University of Pretoria.