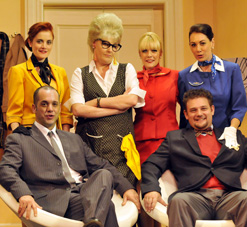 You have to be in the right mood when you go to the theatre to watch a farce. If you’re grumpy, or angry, or tired, or stressed – or terribly serious for whatever reason – then slapstick comedy, mistaken identities, bawdy puns and caricatured characters are likely to get on your nerves.

The counter-argument, of course, is that it’s precisely when you’re feeling low that you need a medicinal dose of silliness: laughter for laughter’s sake has beneficial side-effects. If that’s the case, then it would make sense that farce on the South African stage is a popular phenomenon.

After all, South Africans tend to consider themselves a fairly anxious nation – or, to put it differently, life in this country can be anxiety-invoking in ways more extreme than in other corners of the world.

This is starting to sound like a terribly boring upper-middle-class gripe. And, when you think about it, isn’t the light escapism of farce a bourgeois indulgence? Laughing at the onstage antics of fictional characters who have their provenance thousands of miles away might make local audience members feel better, but it doesn’t address local problems. It doesn’t help the street child outside the theatre, doesn’t treat the mother with Aids, doesn’t prevent the father from breaking the law.

Yet such Marxist moralising isn’t quite an appropriate response either. One of the lessons that South Africa’s artists learned under apartheid was that not every creative impulse can be conscripted to the cause of opposing social ills. This applies to theatre as much as other art forms. As Albie Sachs famously asked in the early days of South Africa’s transition to democracy: “What are we fighting for, if not the right to express our humanity in all its forms, including our sense of fun and our capacity for love and tenderness and our appreciation of beauty?”

Again, however, that declaration won’t quite do, because there is no place for sentiment when it comes to matters farcical – love and tenderness and beauty get short shrift. In fact, the absurd world of farce often reflects an unjust cosmos, one in which people lie and cheat and more often than not get away with their deception. The situations in which characters find themselves may be far-fetched, but farce simply reinforces how ridiculously unfair life can be.

Viewed like this, farce is not so silly after all: it is simply a distorting mirror that reflects our society in comic extremes. But comic is the key word, because farces always end happily – they offer us a brief respite, a few hours of comfort and consolation.

What, you may be wondering, has prompted these reflections? Well, the short answer contains only two words (actually, one word twice over): Boeing Boeing.

Boeing Boeing is a farce by French playwright Marc Camoletti, translated into English and first performed in London in the early 1960s. It dates to that era when international air travel was a glamorous affair, symbolised by perfectly coiffed air hostesses whose jet-setting life was much envied and admired.

Bernard, the play’s protagonist, has managed to secure himself not one but three air hostesses as fiancées (an arrangement about which they are all ignorant) and he manages to keep up the façade of monogamy with the help of Bertha – his longsuffering, slightly embittered and decidedly melodramatic housekeeper – and a reliable travel timetable, ensuring that his fiancées are never near his Parisian flat at the same time.

Things fall apart with the arrival of his bumbling schoolfriend, Robert, whose appearance coincides with the introduction of Boeing jets to the various airlines for which his fiancées work; because the new aeroplane is faster, they no longer follow the old schedule. The result is an entertaining clash of personalities and nationalities, as British Bernard and Robert (with the reluctant aid of French Bertha) try to ensure that the American Gloria, the Italian Gabriella and the German Gretchen don’t meet.

Boeing Boeing has been revived many times on stage and screen, but its latest incarnation is specifically South African – the Anglo-European-American dynamic has been preserved, but is given new life by the interpretation of a talented group of local actors. After completing a season at the Montecasino theatre in Johannesburg, the play has now moved to Cape Town’s Theatre on the Bay, where it will no doubt delight Capetonian audiences.

As with most farces, this production starts slowly: Robert Fridjhon’s debonair Bernard is complacent in his infidelity as he sends Gloria (Jo Galloway) off to the airport, even though he already faces complaints from Louise Saint-Claire’s Bertha in her over-the-top French accent. With the arrival onstage of Alan Committie in the role of Robert, however, the comedy begins in earnest.

Committie is the glue that holds the play together. Robert remains onstage for most of the rest of the play, while the other characters enter and exit from the seven doors surrounding him. Those who have seen his one-man shows will recognise some classic (and no doubt unscripted) Committie-isms interpolated into the action.

Nina Lucy Wylde, as Gretchen, and Bronywn Leigh Gottwald, as Gabriella, both reinforce and subvert the national stereotypes associated with their characters – to great effect. Gottwald’s Gabriella is a stern but feisty Alitalia hostess; Wylde’s Gretchen, while demonstrating the Germanic sincerity one might expect of a Lufthansa employee, is also prone to fits of passion and flighty declarations of love.

* Boeing Boeing is at the Theatre on the Bay in Cape Town until 5 June.