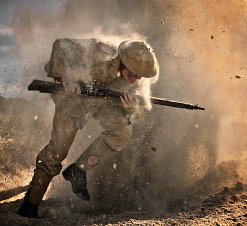 Director Bauke Brouwer has captured
the intensity of war in just 60 seconds.
(Image by Anton Crone, supplied by
Bauke Brouwer) 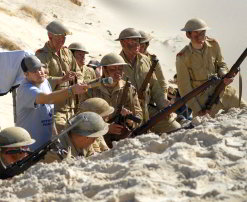 Brouwer (left, with grey cap) made the movie
to honour the thousands of South Africans
who died in the Second World War. 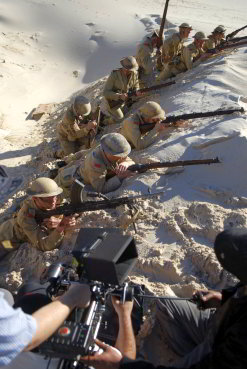 A soldier lies behind a dune, avoiding the bullets whistling over his head.

His face is caked with dust. He looks at the soldier next to him with fear in his eyes. When the captain orders the men to charge, he springs to his feet and runs into the ensuing bloodbath.

This sounds like a scene from a faraway battlefield but it is closer to home than we may think.

The Fallen is a 60-second war film by South African director Bauke Brouwer. Set during the Second World War, the production has been chosen as a finalist for Filminute’s sixth International One-Minute Film Festival.

The Capetonian is amongst 25 nominees vying for two awards including Best Filminute, where the winner is selected by a jury, and the People’s Choice award, which goes to the film voted by the public as the best.

The winners will be announced on 30 September.

Brouwer was chosen out of around 2 000 entries for this year’s festival. Eighteen countries are represented on the list of 25, including those with strong filmmaking backgrounds such as the US, India, the UK, China and Japan.

The films are listed online. Film enthusiasts can view The Fallen and vote for it on this page.

One minute of footage, two days of shooting

Brouwer said Filminute has been invaluable in giving him an international platform to gain exposure and build his directing portfolio.

This year’s entry is not his first as a nominee. Last year, his Gumboots, a story about a boy who enters a talent show as a gumboot dancer but is robbed of his footwear, became the first local film to make the final cut. Gumboots received a jury commendation.

Brouwer and his crew spent two full days shooting for The Fallen. “We shot on 5 and 6 August and submitted it on 20 August.”

The battle scene was played out on the dunes above Hout Bay in Cape Town. The visuals capture the intensity of war experienced by two friends fighting in the desert of North Africa.

The farm scene, which shows the main character delivering a letter of condolence to his dead comrade’s wife, was filmed in Durbanville in the Western Cape.

Though the film was shot just last month, Brouwer started working on the idea of The Fallen more than a year ago.

While researching for the film, Brouwer was amazed to discover that some 120 000 South African soldiers fought in the Second World War. However, their efforts seemed to have been forgotten by present-day citizens.

“This part of South African history is seen as Eurocentric and part of the ‘old’ South African government,” said Brouwer. “Today’s history books are all about the apartheid years and rightfully so, but I believe we cannot forget this part of our heritage.”

His inspiration for the film came from his wife’s grandfather, still alive at age 94, who had fought in North Africa and Italy during the war.

Brouwer partnered with The Heritage Group, a Cape Town-based organisation that pays respect to all of the war’s fallen soldiers, irrespective of nationality. The group provided Brouwer with the uniforms and props needed to create an authentic setting.

He explained that he did not want to make a war movie merely for the sake of it but wanted to explore the universal themes of friendship, loss and guilt; emotions that are relevant even to modern-day viewers.

A story in 60 seconds

Unlike feature length films, the one-minute format forces the director to tighten his scenes in order to get as much as possible out of one short screening, Brouwer said.

“The magic of a one-minute short film is that you can concentrate all your efforts into each frame. When you are working with a tiny budget – a few hundred dollars – every cent you spend is visible.”

He added that a great one-minute film connects with the audience, evoking emotions and entertaining at the same time.

For the love of film

Brouwer’s love for film began during a visit to his family in Holland when he was about 12 years old. While waiting for his father in an editing suite, he watched a group of people working with footage, and became fascinated.

Brouwer has been involved in the filmmaking industry for 10 years now, mostly as an editor. The Fallen is his first production with real weight in it, he said.

Though he has other commissioned work, his plan is to expand on The Fallen and turn it into a feature length film.

This year’s candidates strongest selection yet

The Filminute festival, which began in 2006, is held annually in September and showcases 25 of the best one-minute films from around the world.

Heavyweights of the film industry are chosen to sit on the judging panel.

Filminute’s co-founder and jury head John Ketchum said this year’s selection of finalists is the strongest ever. He added that the quality of submissions has improved over the years, making it harder to choose just 25 films.

“Many strong films fell by the wayside. I am certain audiences this year are going to be awestruck by what filmmakers have done with one minute,” said Ketchum.

Since all the films are online, Filminute is accessible to many more viewers than traditional big-screen festivals. The public is asked to view and vote for their favourite on the Filminute website. One vote per viewer is accepted.

Judging by the site visits, South Africans have been more enthusiastic than most countries – the only users to have visited and voted more were Americans.

This year, organisers brought the films closer to the audience by using two social networking websites.

According to festival co-founder Sabaa Quao, a secondary screening room has opened on Facebook, and here viewers can discuss the films as well.

“Facebook has proven itself by directly and indirectly generating more than 25% of our online audience views,” said Quao.

He also said Twitter followers averaged eight minutes of viewing time per user and have influenced the festival’s growth by tweeting about it.