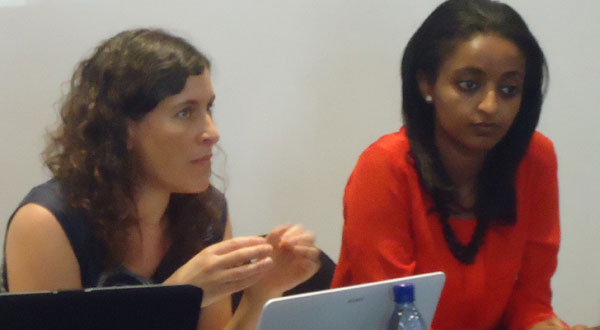 Dr Rachel Ibreck, Director of Justice Africa and Mekdes Mezgebu, AUHRM Coordinator at Justice Africa. Justice Africa is an advocacy organisation and research institute that campaigns for human rights and social justice across Africa. It works closely with survivors and museums, and develops concepts and ideas to present to the AU. (Image: Melissa Jane Cook)

It was astonishing how quickly victims became killers, said Professor Andreas Esheté, the case in point being South Sudan. Too little had been done about the “never again” slogan.

“We stand by when others violate this slogan. We need to take stock of what we have seen and we must see how these places reflect experiences there,” said Esheté, the chair of the AUHRM Board. He was speaking at a dialogue hosted by Constitution Hill in Johannesburg and Justice Africa in support of the proposed African Union Human Rights Memorial (AUHRM)

There must be a symbol of the collective commitment of African citizens and states to renounce complicity or indifference in the face of threats to fundamental human rights anywhere on African soil, he added. He also emphasized that the memorial must demonstrate the AU’s ethical role as a crusader for the protection of the human rights of all Africans, at present and in the future.

Lecturers, directors, professors, managers and others involved in citizen engagement and human rights issues from across the continent, and as far afield as New York and London, attended the dialogue, where they spoke about the meaning of memorialisation, as well as condemned apartheid, racism, brutality and prison atrocities. The consultation for an AUHRM was organised in collaboration with the International Coalition of Sites of Conscience Africa.

It was part of a series of civil society dialogues designed to gather views and experiences from experts on memorialisation, human rights and survivors groups in Africa, and to feed these back to the AU Commission. Previous meetings have been held in Kigali, Rwanda on genocide; in Addis Ababa, Ethiopia on the Red Terror; and in Dakar, Senegal on slavery. A platform will also be given to North African participants after a similar consultation – planned for Abu Salim Prison in Libya – was cancelled as a result of security concerns.

The World Peace Foundation is a project partner in efforts to create the permanent memorial at the AU headquarters in Addis Ababa. Petal Thring, the chief executive of Constitution Hill, welcomed the delegates and said it was wonderful to host such a large group of people who were driven by peace and social justice. Constitution Hill was a fitting venue, a place once known for its deep injustice and brutality that has been transformed into a multi-purpose complex. It includes a museum and the Constitutional Court, which serves as an arbiter of justice.

South Africa took a leading role in launching the AUHRM initiative. In January 2012, President Jacob Zuma joined presidents Paul Kagame of Rwanda and Yayi Boni of Benin to lay the foundation stone for the memorial.

The AU headquarters stands on the site of the former Addis Ababa central prison, known as Alem Bekagn, which means “farewell to the world”. In recognition of the thousands of people who perished at this site, and the millions of other survivors and victims of human rights abuses in Africa, including genocide, the AU has resolved to establish a permanent memorial on the site, and to hold regular commemorative events.

Societies undertake memorial activities to preserve historical memory relating to traumatic events. Memorialisation refers to processes through which memory is perpetuated. It is a means of honouring, recognising and remembering and is an age-old concept.

The aim of the AUHRM is to preserve the memory of mass atrocities, in recognition of past suffering and in the interests of future peace and security. It was established in the union’s constitutive act, a commitment to continental co-operation on the basis of human rights principles, constitutionalism, and the responsibility to intervene in crimes against humanity or genocide. The AUHRM will reflect a series of grave crimes committed against Africans, including the Red Terror in Ethiopia, the Rwandan genocide, apartheid and slavery.

Delegates at the dialogue were unanimous that Africa needed to entrench a memorial culture. Also important was the need to find out whose narrative would be told.

Dr Rachel Ibreck, the director of Justice Africa, said there are many tensions and complexities in defining a memorial. “It is a merging of human rights and memory. There are so many questions about how to remember and who to remember. It is a very enriching process, with much exchanging of ideas between countries. Out of all this, much solidarity comes out of the process.”

Justice Africa is an advocacy organisation and research institute that campaigns for human rights and social justice across Africa. It works closely with survivors and museums, and develops concepts and ideas to present to the AU.

On the panel reflecting on memorialising apartheid at the AUHRM, Lauren Segal, the head of exhibition at the Johannesburg Holocaust and Genocide Centre, said three critical points must be raised. Firstly, there must be geographical markers on the site to make significant acknowledgment of what happened there. Secondly, there must be an exhibition of sorts to present the stories and atrocities that unfolded in the place; and thirdly, there must be symbolic ways to acknowledge that the site spoke to the past of the building. “We must acknowledge these traces of what happened before.”

Annie Coombes, professor of material and visual culture in the department of history of art at Birkbeck, University of London, said the space for the AUHRM was on the edge of things, the periphery, and it must become centre stage. “It is not just for survivors but also a reminder to leaders of the AU to remember the importance of human rights.” She said that memorials were often built and then forgotten. “Often what it commemorates becomes invisible. There must be the idea of a process and reanimation. It needs to be animated by people and their voices.”

Many individuals should be part of the discussion, said Bonita Bennett, the director of the District Six Museum in Cape Town. It should not only be a historical perspective, but also artistic. The heritage, NGO, and justice sectors, as well as victims, survivors and teachers must all play a part. “The AU must secure ownership and funding and support the various initiatives and dialogues. These places hold memory and retain consciousness. The memorial must be more than one thing; it must play a crucial role in art and education.”

The process of memorialisation was very complex and “we need to engage in conversation, discover the systematic issues that underpinned apartheid and ask fundamental questions. We need to interlock experiences,” said Noor Nieftagodien, a senior lecturer in the history department at Wits University. A key issue was that things were often relegated to the bin of history. “When we say ‘never again’, look at today, the police brutality; that is worse than the violence during apartheid. Have we learned anything?”

Ibreck said the site must be a visible memorial and a place to disseminate information. “It must document stories, archives, and house temporary exhibitions. Ideally the institutional status of the centre must be owned by the AU but it must be managed by NGOs as they have a better understanding of these issues.”

AUHRM will be a dynamic site and will evolve in partnership with a network of groups and associations dedicated to the remembrance of atrocities in Africa. At the conclusion of the dialogue, a clear consensus was reached on the need to remember and learn from the past and on the importance of using the memorial as a site that would serve as an educational centre to help prevent the recurrence of such atrocities in the future.