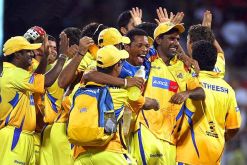 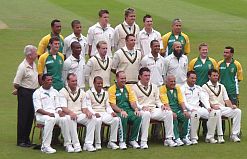 The Proteas, dressed in test kit, during
their 2008 tour of Australia.
(Image: Wikimedia)

South Africa has become the hub of the cricket world almost overnight, with two major international tournaments shifting from India and Pakistan to the southern tip of the African continent amid fears for the safety of players.

The country will host both the Indian Premier League and the International Cricket Council’s (ICC) Champions Trophy tournaments. The unexpected cricketing bonanza will bring thousands of visitors to South Africa and some sources say it will boost the economy by up to R1-billion ($100-million).

The ICC awarded the Champions Trophy to South Africa in mid-March, and followed this announcement a mere two weeks later with the news that the Indian Premier League (IPL) was also moving south.

South African cricket fans have more to look forward to in 2009 than ever before. The Champions Trophy takes place in Gauteng province from 24 September to 5 October 2009, while IPL games will be held around the country between 18 April and 24 May.

The new infrastructure put in place for the 2010 Fifa World Cup will have an unscheduled test run during the two large-scale sporting events.

Cricket South Africa has less than a month to organise the month-long IPL event, which takes place over 59 games and in six cities around the country.

Cricket South Africa CEO Gerald Majola said: “CSA is delighted to accept the invitation to host the 2009 DFL Indian Premier League tournament. This is a great compliment to both CSA and our nation to be shown this confidence in our ability to hold one of the world’s top sporting events at short notice.”

England was another contender for the hosting honours but in the end South Africa’s glorious weather swayed the IPL board. In addition, South Africa is experienced in putting on a show, having hosted the inaugural Twenty20 World Cup in 2007 as well as the Cricket World Cup in 2003 – the event’s first showing on the African continent. The fact that South Africa is two time zones closer to India than is England also influenced the decision, as games can be broadcast in India during prime time.

The IPL is a Twenty20 tournament. In this, the shortest form of the game, teams bat for a maximum of 20 overs each, bringing a game to a close in less than three hours, as opposed to a normal One Day International (ODI) which takes around four hours per team.

The tournament, which features the world’s top cricketers, caused a storm of controversy when it was launched in 2008 because of the huge salaries offered to players – salaries that could entice them to abandon their careers at home and join the league, to the detriment of their national teams. Furthermore, national cricket bodies contend that players should always be available to represent their country irrespective of the IPL schedule, but IPL contracts are inflexible.

Fans can look forward to the likes of the Jaipur Rajasthan Royals, the Chennai Super Kings, the Delhi DareDevils, and the Kolkata Knight Riders, among others, striding onto South African fields, bringing with them the glamour and excitement of limited overs cricket played by the best in the world.

Teams will start arriving in South Africa from 1 April 2009. According to the IPL, the opening ceremony and first game will take place at Newlands in Cape Town, while the final will most likely be held at the Wanderers in Johannesburg. Both cities are world-famous as cricket venues, but there are a number of other South African cities, including Durban, Centurion, Port Elizabeth, Cape Town, East London and Bloemfontein, that are also well versed in hosting international games.

A horror attack by armed terrorists on Sri Lankan players in Lahore, Pakistan, in February 2009 sparked an international outcry and prompted the world cricketing authority to immediately seek an alternative venue for games already scheduled.

Pakistan was to co-host the Champions Trophy, but ICC CE Haroon Lorgat said afterwards that international cricket would not return to that country soon. Lorgat, a South African, took over the helm of the ICC in April 2008, succeeding Malcolm Speed of Australia.

Six policemen and a bus driver were killed during the onslaught. While cricket on the subcontinent remains as popular as ever, the safety of players and officials is the ICC’s top priority.

The ICC Champions Trophy is a prestigious ODI tournament that takes place every two years and is regarded as second only to the World Cup. It was scheduled for Pakistan in September 2008 but was postponed once already due to security concerns.

South Africa and Sri Lanka were both considered but again, the weather in South Africa was a major factor. Games will take place at the dual venues of the Wanderers in Johannesburg and Supersport Park in Centurion, near Pretoria.

Only the top eight ODI teams are eligible for the tournament. Second favourite South Africa is placed in Group B, along with New Zealand, Sri Lanka and England. Top seed Australia as well as India, Pakistan and West Indies are in Group A. Australia is the defending champion.

ICC President David Morgan said, “I think the Board has made a sensible decision that will give the event every chance of success. Cricket South Africa can provide two world-class venues in what is effectively one location.” Morgan added that weather conditions in the area around Johannesburg in September and October are stable and ideal for cricket.

At the top of their game

The Proteas are currently at the top of the ICC’s ODI table, just one point ahead of their arch-rivals Australia, while the positions are switched for the latest Test Championship table.