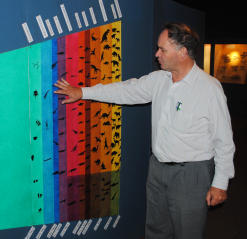 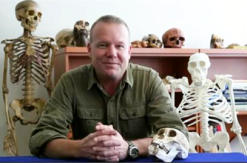 Prof Lee Berger of Wits captured the attention of the world with his find of Australopithecus sediba.
(Image: Maropeng) 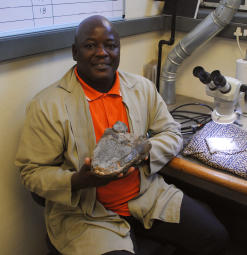 Sifelani Jirah, who holds an MSc in palaontology, prepares a fossil for study by carefully removing the rock around it. This process can take many months. 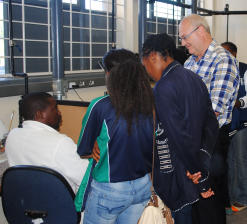 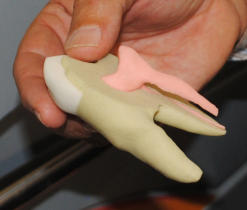 This ancient tooth was scanned by the CT instrument and printed in the 3D printer.
(Images: Janine Erasmus)

The centre was launched earlier in April by Science and Technology Minister Derek Hanekom, the ninth to be opened under the Centres of Excellence programme of the National Research Foundation and the Department of Science and Technology. There are five more centres to come, which are expected to be announced before the end of the 2013/2014 financial year.

Hanekom also introduced a national strategy for palaeosciences, which was gazetted in draft form in 2011 for public discussion (download PDF, 1.09 MB). He said that South Africa had the potential to be a world leader in the field of palaeosciences, for several reasons.

“The rich fossil and archaeological record we have in South Africa makes us one of the few regions in the world offering tangible and comprehensive records of the past and thus the possibility of understanding both past and present changes in biodiversity,” he said at the centre’s launch. “Indeed, at least three of the recognised five major global extinctions of the past 500 million years are represented in the rock record of South Africa.”

Scientists believe that the world has entered a sixth global extinction period, but to understand it and accurately track changes, they need to have a full catalogue of biodiversity of the past.

The minister also praised the trailblazing accomplishments of a team of scientists headed by Wits scholar Prof Lee Berger. The team is responsible for the discovery and description of Australopithecus sediba, a previously unknown species of hominid which roamed southern Africa about two-million years ago.

Berger and his team recently had six articles featured in a special Sediba issue, published on 12 April, of the prestigious journal Science. “To get one article published in an issue of Science is an achievement, but six is extraordinary,” says Prof Bruce Rubidge, the director of the Bernard Price Institute for Palaeontological Research at Wits, and now head of the newly established centre of excellence.

The centre is based at Wits, but will work with a number of academic and cultural institutions, namely, the University of Cape Town, Iziko Museums in Cape Town, the National Museum in Bloemfontein, the Albany Museum of Rhodes University in Grahamstown, and the Ditsong Museum of Natural History (formerly the Transvaal Museum) in Pretoria.

The palaeosciences strategy, meanwhile, will provide a framework for the development of palaeontology, archaeology, palaeoanthropology, and other related fields.

According to the strategy, the South African government will focus on the development of human capital in palaeosciences, as well as infrastructure such as storage, research and display facilities. It will also seek to provide careers and employment opportunities in the growing sector of palaeotourism.

The centre aims to help fulfil these aims. “There are 29 scientists involved at the moment, including 14 academic staff from Wits. That’s already half of the complement, so this an ideal place to establish the research node,” says Rubidge. “There will be many other people, including technical staff and students, making this one of the biggest palaeoscience collaborations around.”

Interest in the discipline is at an all-time high. “We’ve never had more students than we have today. But there is still a shortage of skills. We need more doctoral students in all sciences.” Rubidge is confident that the centre will make a real difference in addressing the challenges.

He has other goals that include collaboration with other African countries, and the care and preservation of fossil collections, not only those kept at Wits. “We need to ensure that our collections are well looked after so that future generations can also benefit from them.”

Wits holds the biggest palaeobotany herbarium in the southern hemisphere. It also has a microfocus x-ray computed tomography facility, which is an instrument that can produce an image of something embedded in another substance – such as a bone in rock – with a 3D printer to create a representation of the embedded object. This guides technicians in fossil preparation, as they have a better idea of where to chip away rock, and where not to.

South Africa is world-renowned for the antiquity of its rock record, which dates back some 3.5-billion years. Because so much of the local rocks are fossil-bearing, they present an unprecedented opportunity to examine changes in biodiversity over that period.

“This is why we have a competitive advantage over other countries in this field,” explains Rubidge, “and we can be a global leader, but we need to exploit these resources in the same manner as we’ve done with our proximity to Antarctica, and the Karoo as ideal location for the Square Kilometre Array.”

According to Hanekom, only South Africa can provide “the oldest evidence of life on Earth; the oldest multicellular animals; the most primitive land-living plants; the most distant ancestors of dinosaurs; the most complete record of the more than 80-million-year ancestry of mammals; and a remarkable record of the origins of humans and their earliest technological achievements over the past four-million years”.

Rubidge explains that the South African record reveals clear evidence of the beginnings of life and the evolution of those early life forms into fish, amphibians and reptiles, which moved on to land about 300-million years ago, and branched in three directions into tortoises; mammals; and lizards, snakes, birds and dinosaurs.

This entire evolutionary chain is forever captured in the rocks of South Africa’s semi-desert Karoo, which is the only place in the world, says Rubidge, to have such an extensive and continuous fossil record. Although humanity started in the Cradle of Humankind, an area about an hour’s drive northwest of Johannesburg, the origin of mammals lies in the Karoo, he adds.

Rubidge was born in Graaff-Reinet in the Karoo and spent his childhood on a farm, where he developed an early interest in collecting fossils. He is keen to expose the schoolchildren of today to the same influences. “We’ll start at the junior level, because that’s the best time to foster a lifelong interest in a particular field. We also plan to build on our outreach activities for kids by enthusing and training their teachers. They’re the ones who need to carry the message forward and nurture the interest of the children.”

He says that Wits graduates have never struggled to find jobs, and that there are a number who have forged respectable careers overseas, such as associate professor Darryl de Ruiter of Texas A&M University, and Patrick Bender, who worked for the Tasmanian Museum and Art Gallery. “Because South Africa’s fossil heritage is relatively unresearched and the resources are so rich, this also draws many students and researchers from overseas.”