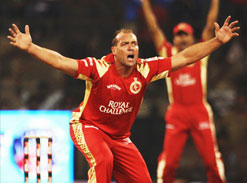 South Africa’s Jacques Kallis, playing for
the Royal Challengers Bangalore, appeals
for a wicket. Kallis will play for the Indian
team in the upcoming T20 tournament.
(Image: CLT20)

South African sports fans are in for yet another treat, with the international 2010 Airtel Champions League Twenty20 (CLT20) championship taking place around the country in September.

The tournament gets under way at the imposing Wanderers, or Bullring, in Johannesburg on 10 September, with the Highveld Lions and Mumbai Indians facing off.

The Airtel tournament was launched in 2008 and was due to take place in India that year, but was postponed until 2009 because of the Mumbai attacks. This year’s event sees 10 of the world’s best domestic Twenty20 (T20) sides taking to the field for the top prize of R18.4-million (US$2.5-million).

Competing teams are from South Africa, India, Australia, New Zealand, Sri Lanka, and the West Indies, and all are champions and runners-up of their domestic competitions.

T20 cricket is a shortened form of the game in which each team bats for 20 overs, if weather conditions are favourable. The fast-paced T20 format is a favourite with fans who enjoy the energetic vibe at games. It has spawned a dedicated following in its own right.

CLT20 chair Shashank Manohar said T20 cricket brings out the fun side of the sport. “Entertainment is part and parcel of the stadium experience. The CLT20 is going to be a 23-day joyride of top-class cricket and great family entertainment.”

The CLT20 brand ambassador is Indian screen legend Amitabh Bachchan, known fondly as the “Big B”. Bachchan is an industry veteran, with around 180 films to his name, and was even was a member of the Indian Parliament from 1984 to 1987.

The tournament is run by the cricket boards of India, Australia and South Africa, with representatives from each country making up the governing council. Other countries participate by invitation.

Defending champions are the New South Wales Blues, who didn’t qualify for this year’s event. South Africa’s JP Duminy of the Cape Cobras is the most prolific run-scorer of the tournament to date, while Dwayne Bravo of Trinidad and Tobago has captured the most wickets.

The participating teams in 2010 are the Central Stags from New Zealand; the Chennai Super Kings, Mumbai Indians and Royal Challengers Bangalore from India; Guyana from the West Indies; the Highveld Lions and Warriors from South Africa; the South Australian Redbacks and Victorian Bushrangers from Australia; and the Wayamba Elevens from Sri Lanka.

The Indian teams are part of the Indian Premier League, which draws cricket stars from all over the world. South Africans currently involved include JP Duminy and Ryan McLaren of the Mumbai Indians, Justin Kemp and Albie Morkel of the Chennai Super Kings, and Jacques Kallis and Dale Steyn of the Royal Challengers Bangalore, among a number of others.

Although the big names will be a highlight of the tournament, said Cricket Australia CEO James Sutherland, “CLT20’s ability to provide development opportunities for non-capped players is one of the most satisfying aspects of the tournament.”

Time and time again South Africa has proven itself more than capable of successfully hosting major international sporting contests, and in the past couple of years has welcomed the global cricket community to events such as the Indian Premier League and the International Cricket Council’s (ICC) Champions Trophy, both of which took place in 2009.

South Africa also hosted the inaugural Twenty20 World Cup in 2007 as well as the Cricket World Cup in 2003. The latter was the first of its kind for the African continent.

As if that wasn’t enough, the inaugural ICC Women’s Cricket Challenge takes place in Potchefstroom, North West province, from 6 to 16 October 2010.

The recent 2010 Fifa World Cup, however, is the jewel of South Africa’s hosting accomplishments. The football extravaganza took place in June and July 2010, to acclaim from around the world. The hugely successful hosting of the Fifa World Cup silenced many a critic who cast doubt on South Africa’s capability, despite the country’s distinguished track record.

At the cricket showcase’s launch earlier in August, Cricket South Africa President Mtutuzeli Nyoka said that the country was honoured to be hosting the 2010 Airtel Champions League Twenty20.

“We have just hosted the football World Cup,” he said, “and our country is on a high. This tournament is coming at the right time.”

Also in attendance at the launch were fan favourites Muttiah Muralidaran, who plays for the Chennai Super Kings although he is Sri Lankan; local heroes Makhaya Ntini and Wayne Parnell of the Warriors; and JP Duminy and Ryan McLaren representing the Mumbai Indians; as well as CLT20 CEO Sundar Raman.

“We are confident that fans will come out and support 10 of the world’s best T20 franchise teams,” said Raman.

Tickets are also available at all the host venues – the Wanderers, Supersport Park in Centurion, St George’s Park in Port Elizabeth, and Kingsmead in Durban.

The tournament’s 10 teams are divided into two groups of five, with 20 first-round matches taking place in a round robin format.

The top two teams from each group will go forward to the semifinals, to be played at Kingsmead and Centurion on 24 and 25 September. The final takes place at the Wanderers on 26 September.

Before the first ball is bowled, the tournament will kick off with a concert featuring Spanish pop star Enrique Iglesias. This takes place on the eve of the CLT20 at Johannesburg’s Botanical Gardens in Emmarentia.

“South Africa is a special place, and after Spain’s [football] World Cup win, holds even more significance for me,” said the singer.