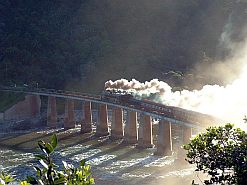 South Africa’s Outeniqua Choo-Tjoe, the only scheduled steam train still running in Africa, will re-launch on 1 October 2009 after a repair and maintenance spell of several months.

Maintenance is carried out during South Africa’s winter months, when the passenger load is lighter. This year work on the train was slightly delayed because vintage spare parts are becoming harder to find.

The train, one of the Western Cape’s most popular tourist attractions, links the Garden Route towns of George and Mossel Bay, about 40km west of George.

Travelling along a scenic coastal route, the Choo-Tjoe plies its trade on a daily basis in summer and on Mondays, Wednesdays and Fridays in winter.

The train is operated by state-owned national port, rail and pipeline company Transnet. However, the company is currently looking for another operator, to be appointed through a tender process. Transnet wants to focus on its core business of transporting heavy freight, which means that the primarily tourist-oriented Choo-Tjoe must find another owner.

The company has allayed train enthusiasts’ fears that the Choo-Tjoe will be closed down permanently, saying that it will continue to operate the service until a suitable buyer is found.

Also in attendance were members of local tourism associations, local government, and the mayors of Eden District, Knysna and Mossel Bay municipalities.

Winde said afterwards that the service would be relaunched in October in coordination with the regional municipalities and tourism associations. He added that the Western Cape provincial government would be involved in every step leading up to the handover, although Transnet would oversee the process.

Construction of the track started from both ends in 1924 and was completed in 1928.

The carriages are generally pulled by an 80-ton Class 19D locomotive, out of the yards of the North British Locomotive Co. Occasionally a Class 24 or Class 23s diesel engine will take the load, particularly when there is a high fire hazard in the ecologically sensitive areas through which the train runs. Passenger carriages are veterans too, some dating back more than a century.

The Choo-Tjoe’s two-hour route between the two Indian Ocean towns is one of the most picturesque of any South African train. It passes through the farmlands that lie at the foot of the Outeniqua Mountains, and through the seaside towns of Little Brak River, Great Brak River and Hartenbos on the way.

An estimated 70% of the train’s more than 115 000 annual passengers are foreign visitors.

The point of departure in George is the Outeniqua Transport Museum, and in Mossel Bay it is the Dias Museum Complex. This is the site of the 500-year-old Post Office tree, and the place where explorer Bartolomeu Dias stopped for supplies in 1488 after he became the first European to round the notorious Cape of Good Hope.

The train’s original route took it to Knysna, about 60km east of George, where it crossed the Knysna lagoon via the Kaaimans River bridge, reportedly the most photographed railway bridge in the country. The train has even been been known to stop so that photographers can get the perfect shot.

The new route, said Mossel Bay Tourism chair Louis Cook, gives transport enthusiasts the chance to explore the history of various modes of transport. These range from the rare vehicles and historic cars and trains at the Outeniqua Transport Museum, to the maritime museum and life-size replica of Dias’s caravel in Mossel Bay.