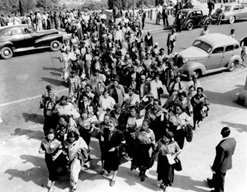 Thousands of women arrive at the Union
Buildings, Pretoria to march against
pass laws. Image:Jurgen Schadeberg,
1956 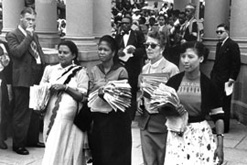 In South Africa the month of August honours the 20 000 females who, on 9 August 1956, marched to the Union Buildings in Pretoria, the official seat of the apartheid government at the time, to protest against the pass laws, which required black people to carry a document to prove they were allowed to enter white areas.

But the women’s anti-pass law campaign goes back as far as 1913 when black women formed the Bantu Women’s League, which later became the ANC Women’s League, to oppose the state’s attempts to force women to carry passbooks.

The league was successful in convincing the government that women did not have to carry passes, however, this all changed in 1952 with the introduction of the Abolition of Passes and Co-ordination of Documents Act, which required all black people over the age of 16 to carry a passbook at all times. The law stated that passbooks had to be signed by an employer every month, and show authorisation for the carrier to be within a particular area and proof of tax payments.

Women started rebelling against having to carry these passes and smaller, regional protests eventually culminated in the formation of the Federation of South Africa Women (FSAW). This was a multi-racial body – with the African National Congress Women’s League as its largest component – which aimed to mobilise a united struggle against apartheid.

As a result, in 1955 the Women’s Charter was adopted in Johannesburg at the FSAW’s annual conference. Among those present at the adoption of the charter was Annie Silinga, a women’s rights activist who risked being arrested and victimised by refusing to carry a passbook.

Opposition to the pass law gained momentum after anti-apartheid activist and one of the FSAW founders, Lillian Ngoyi, was elected to the national executive of the ANC. She made it clear that women’s protest marches would continue until government heeded their demand to have the law repealed.

On 27 October 1955, 2 000 women of all races marched to the Union Buildings to meet with Cabinet ministers and hand over a memorandum of grievances, but the ministers refused to meet the delegation. A similar protest took place in Cape Town at this time.

Less than a year later on 9 August 1956 the number of women marchers reached over 20 000 as a second major demonstration took place. Again,

The group headed to the Union Buildings, leaving vast piles of petitions of more than 100 000 signatures at then Prime Minister Johannes Gerhardus Strijdom’s door.

For half an hour the women stood outside the Union Buildings in silence, with their arms raised high in the clenched fist of the Congress salute. Later, after a series of addresses, the women dispersed. It was during this march that the phrase “You strike a woman, you strike a rock” was popularised. This dramatic anti-pass march went down in history for placing women at the forefront of the political struggle against racial oppression in South Africa.

Today the rights of South African women are legally protected by our world- renowned constitution, protecting individuals from gender-based discrimination. The introduction of the 1996 Bill of Rights saw all women in South Africa receive formal recognition as equal citizens. Previously, for many years, women in this country were second-class citizens, placed under the social and even legal control of their fathers or husbands.

The Constitutional Court has handed down a number of judgments that have affirmed women’s rights. Section 44 of the Insurance Act of 1943 deprived married women, but not married men, of all or some of the benefits of life insurance policies made in their favour by their husbands.

In the case of Brink v Kitshoff the court held that, since the common-law rule prohibiting donations between spouses had been abolished, the argument that the section provided married women with a benefit was no longer applicable. The court also rejected the argument that the section was necessary to prevent collusion between spouses: such collusion could as easily occur where husbands rather than wives were beneficiaries.

But South African women continue to face critical challenges socially and economically. Black women, especially, are still economically disadvantaged. They make up a section of the population stuck in lower-paid jobs, for example as domestic workers and farm labourers.

Women also have to contend with extremely high rates of rape and domestic violence.

But the South African government remains committed to addressing the plight of women. The Sexual Offences Act and the Child Protection laws form a legal framework for the protection of women and children.

According to the South African Human Rights Commission “women’s social exclusion, economic deprivation and discrimination are integrally linked to HIV/ Aids. Most of them [women] are on the margins of society and are denied access to their most basic human rights – to freedom from discrimination, to education, to physical integrity, to economic security, and as result they become the most vulnerable to HIV infection.”

Institutions like the Gender Commission of Equality have been set up to monitor and evaluate the policies and practices of government and the private sector to ensure that gender equality is upheld at all times.

The commission also serves to investigate cases where individuals feel they have been discriminated against on the basis of their gender. Being independent from government, the body is able to analyse and make recommendations to parliament on existing and upcoming legislation from a gender perspective.

In Africa, South Africa leads the way in women’s participation in Cabinet, with 42% of ministers being female.

When South Africa’s Deputy President Phumzile Mlambo-Ngcuka was appointed in 2005, the Gender and Media Southern Africa network (Gemsa), praised President Thabo Mbeki for appointing a woman, saying, “Gemsa wishes to extend its congratulations to the new deputy president of South Africa, Phumzile Mlambo-Ngcuka, and to President Mbeki for his enlightened choice … We commend Mbeki for using the opportunity created by the recent political crisis in South Africa to strengthen women’s participation in the executive.”

There are also a number of powerful businesswomen in South Africa who have made strides in male-dominated fields. Mining magnate Bridgette Motsepe is widely regarded as one of the most successful women in the industry in the world.

Every year women’s day celebrations are held across the country. This year President Thabo Mbeki delivered a keynote address at a women’s day event in Ga-Motlatla Village in Lichtenburg, North West, while The Women in Arts Festival in Durban, KwaZulu-Natal began its run in late July 2008 to mark the contribution of South African women to creative endeavours across the cultural spectrum.