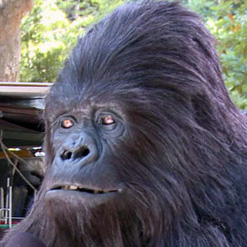 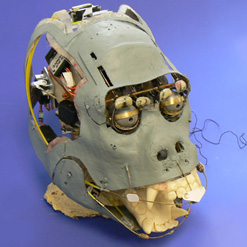 An animatronic gorilla fabricated by Cape
Town special effects company CFX, and
the skull that animates it.
(Image: CFX)

The famous family film Free Willy, released in 1993, made the world fall in love with Keiko, the live killer whale who played the role of Willy. Ironically, while the film was about the escape of a captive orca, Keiko himself was confined to a Mexican amusement park. The film prompted an international campaign to have the whale returned to his natural habitat.

Free Willy and its two sequels used phenomenal animatronics, but Keiko was always needed to add naturalism. Seventeen years later the fourth instalment of the franchise keeps that naturalism without the need for a live animal, thanks to animatronics created by Cape Town special effects company Cape Commercial and Cine Effects, or CFX.

“Our challenge wasn’t so much the physical building of the orca, but rather the creation of a character with which viewers can identify and believe in,” says CFX director Rob Carlisle. “Disappointment can cause a whole movie to flop.”

Free Willy 4: Escape from Pirate’s Cove, set for release on DVD in 2010, was shot in Cape Town. The film tells the story of an orphaned Australian girl called Kirra who is sent to live with her grandfather in South Africa. The old man owns a rundown water theme park and when a baby orca, Willy, gets washed ashore, there is conflict over whether the little whale should be kept as an attraction or rehabilitated and sent back to his family.

Bringing the orca to life was one of CFX’s greatest challenges yet, Carlisle says. The company has previously created an animatronic gorilla, anteater, moose, hippo, elephant, hamster and two-metre great white shark – as well as prosthetics, miniatures, costumes, props and gadgets.

Its work has been used in such upscale movies as 10 000 BC – where CFX was head of fabrication and set dressing – as well as Blood Diamond, Lord of War, Last House on the Left, The Poseidon Adventure and Flight of the Phoenix.

The whole CFX crew, except Carlisle, consists of freelancers – a core group of 12, which grows to 40 in peak periods. They have diverse backgrounds. Carlisle studied electronic engineering before joining a film school in Pretoria. He then apprenticed in various film departments across the world before ending up fabrication. He started CFX in 2000 as a fabrication company manufacturing items for the film industry.

“There wasn’t a large company that catered for the international market, employed large numbers on big movies and provided training,” he says.

Carlisle ascribes CFX’s success to a combination of hard work, passion for the film industry and freedom of creativity. “You don’t need formal training. We have to retrain people even if they studied at varsity.

“Instead we prefer people that love the industry and understand the nature of the work. Fabrication involves long hours of work and harsh deadlines – you’re not going to make it if you don’t work hard.”

He says formal training sometimes dulls innovation. “If we tell an engineer we want to build an orca that swim at this budget within a month or two, the engineer would, 10-to-one, say it is impossible. Whereas somebody who knows little about the limitations might come up with great ideas to overcome challenges.”

But life skills are also important, so Carlisle prefers freelancers who are a little older to those who just finished school. He also depends heavily on his crew for inspiration.

“I am not a solo operator. When people have ideas I listen to them. People work 10 times harder on their own ideas than on rigid top-down instructions.”

This management style has brought much innovation to CFX and helps the company remain at the fringe of development. Partnering with people from abroad and opening the workshop to international groups has added to this effect.

The fun factor is also a high priority for success. “A fun informal work environment helps to ensure that people continue to enjoy their work – and this is translated into the end project,” Carlisle says.

CFX mainly works on international productions being shot in South Africa, for which importing fabrications would be too expensive. The company also builds puppets for live performances and has recently expanded into animation.

Carlisle plans to eventually build his company into a one-stop shop for international filmmakers – from early to post production. The local industry is currently dominated by boutique-like companies offering specialised services – resulting in much repetition.