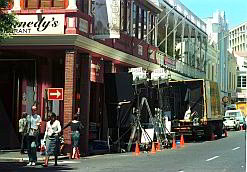 Cape Town residents are familiar with film
production crews working around town –
but the city will be thrust into the
spotlight with a spin-off of the popular
US law drama Law and Order getting a
South African make-over.
(Image: MediaClubSouthAfrica.com. For
more free images, visit the image library) 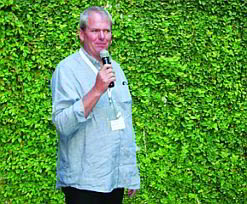 The only people you expect to solve a grisly murder scene in an hour are the detectives from the Law and Order series, which will soon be set and filmed in Cape Town.

Denis Lillie, the CEO of The Cape Film Commission (CFC), said: “Africa HD has secured the format rights to a South African franchise of Law and Order. They intend to start filming the 12-part series in May 2012.

“The CFC has promised to give them hands-on assistance with securing locations, permits and any other aspects to do with filming that they will require.”

The crew working on the set will also be largely South African, which will create jobs in the local film industry and, according to CFC, “each of the 12 episodes will generate around R3-million (US$419 000) for the local economy”.

Although Capetonians may experience some disturbances during filming, the overall impact of the project will be positive.

Lillie said: “The road closures and minor inconveniences associated with the shoot will be offset multiple times by the gains the region will incur.”

A global satellite and cable channel in high definition, and dedicated to African content, is also on the cards for Africa HD in the future.

Cape Town in the spotlight

Viewers of the locally filmed series will be taken on a virtual tour of Cape Town, enhancing the tourism appeal of the Western Cape province.

“The decision to film this series here in Cape Town will strengthen the city’s brand both as a tourist and film destination.”

Alan Winde, Western Cape minister of economic development and tourism, described the project as a “coup for the region”.

News of the series coming to Cape Town follows a string of other accolades notched up by the city this year. These include Cape Town International Airport winning the top airport in Africa award, the University of Cape Town’s Graduate School of Business’s MBA being rated the 60th best in the world, and Capetonian Luke Taylor making it into the finals of the 2011 Google Science Fair competition.

Law and Order, the franchise

The original police-procedure and legal drama series, created by Dick Wolf and set in New York, was first aired by NBC on 13 September 1990.

The series won several Emmys and in 2002 was ranked 24th on the TV Guide’s 50 Greatest TV Shows of All Time.

The format of the show has two parts: the first starts with the discovery of a crime and then shows how detectives solve it.

The second phase is set in the courtroom and shows the suspect’s trial.

The New York version of the series incorporated leading newsmakers into its storyline, including former city mayor Rudy Giuliani and attorney William Kunstler.

This trend of localising the drama will be followed in the Cape Town production next year.