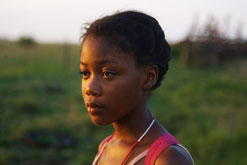 South African film Life, Above All has
taken the Cannes film festival by storm.
(Image: OutNow)

South African production Life, Above All was the talk of the 2010 Cannes Festival after receiving a 10-minute standing ovation at its world premiere there on 18 May. The film delivers a power message about the country’s HIV/Aids burden from the perspective of a young girl whose family is deeply affected by it.

The movie is competing in Cannes’s Un Certain Regard (translated as “a certain outlook”) section for world cinema. This has been a part of the festival’s official selection since 1978, and takes place at the Debussy Auditorium.

Introduced two decades after the section’s inclusion in the festival, the top prize is the Prix Un Certain Regard, which rewards innovative young talent with invaluable exposure and financial assistance for distribution in France. The prize, worth €30 000 (R293 000), has never been won by a South African film.

In fact, only three African films have ever taken honours in this section – Morocco’s A Thousand Months which took the Prix Le Premier Regard or First Glance Prize in 2003; Moolaadé from Senegal, which scooped the big prize in 2004; and Burkina Faso’s Delwende, which took the Prix de l’Espoir or Prize of Hope in 2005.

Life, Above All is the only South African film showing as part of the official selection this year. It received its second and third screenings on 19 and 20 May. The trailer can be viewed on the Cannes website.

With a lot of Cannes’ attention going to the forthcoming Winnie Mandela movie, unjustly in the opinion of some as it stars American actors, it is hoped that the increasingly popular local drama will wrench back some of the focus onto the real South African film industry.

Life, Above All is based on best-selling Canadian author Allan Stratton’s young adult novel Chanda’s Secret, about a 16-year-old girl dealing with HIV/Aids and the accompanying stigma. The subject is particularly poignant in light of South Africa’s huge HIV/Aids burden, which has cost the lives of hundreds of thousands and left countless children orphaned.

The screenplay was adapted by award-winning playwright and screenwriter Dennis Foon (The Longlight Legacy trilogy, Little Criminals). The film is marketed in France as Le Secret de Chanda.

Stratton has since written a standalone sequel titled Chanda’s Wars, which focuses on the humanitarian issue of child soldiers in Africa.

Life, Above All is a South Africa-German collaboration, directed by Cape Town-born Oliver Schmitz, the son of German immigrants. Schmitz is no stranger to Cannes, with two of his earlier films, Mapantsula (1988) and Hijack Stories (2000), making it to the prestigious competition. The former film was banned in South Africa at the time, but Cannes was eager to view it.

Schmitz was humble about his achievement. “It is the fourth time I am in selection in Cannes but you don’t get blasé about it because it’s the cream of what’s happening every year in the film world,” he said.

However, this time it was young first-time actress Khomotso Manyaka who stole the show with her portrayal of Chanda. Manyaka’s performance has caused a sensation and has been described as “commanding” (ScreenDaily), “stellar” (Times Live), and “stunning” (film distributor Bavaria International).

Renowned film critic Roger Ebert gave the film two thumbs up, noting in his Cannes blog that it was warmly received by the notoriously difficult Cannes audience, who are not known for holding back their favour – or displeasure. Ebert added that even the renowned Jean-Luc Godard, whose latest offering Film: Socialisme showed before Life, After All, managed only a trickle of applause.

The lengthy ovation bestowed on Life, Above All is a sure sign of approval – “At Cannes, audience satisfaction can be measured by the length of ovations,” blogged LA Times journalist Steven Zeitchik.

“The film is about deep human emotions, evoked with sympathy and love,” wrote Ebert in his glowing review.

Life, Above All is set in the community of Elandsdoorn near Johannesburg. In the book the action takes place in the fictional town of Bonang, somewhere in Southern Africa. Lead actress Manyake is from the real town of Groblersdal, which is located in the Sekhukhune district of Limpopo province.

The film’s central character, 12-year-old Chanda, is first seen as she makes preparations for the burial of her baby sister Sara, who has died. Her grief-stricken mother takes ill and her stepfather is drinking heavily, although nobody talks openly to Chanda about these problems. The child is left with no choice but to take over the care of her two younger siblings.

Rumours begin to spread through the close-knit community that the baby died because her mother and father have HIV/Aids – which nobody wants to acknowledge – and the family is shunned. Chanda’s mother flees the village and the young girl looks for answers but finds none. She courageously decides to tackle the situation head-on, leaving her home and school to seek her mother, challenge the gossip, find healing in truth, and restore her family’s name.

The film paints a tragic picture of the devastating effect that HIV/Aids has had on many families in South Africa, particularly because of the Thabo Mbeki government’s inexplicable denial of the link between HIV and Aids, and delay in rolling out antiretroviral treatment.

Children, whose parents have died of HIV/Aids, are often left to look after the younger ones in the family, trying to survive through any means they can find. In the film Chanda’s best friend Esther, for instance, sells herself into prostitution to earn money for herself and her siblings, becoming infected in the process.

However, with President Jacob Zuma’s new HIV /Aids action plan, announced on World Aids Day and brought into effect in April, the situation in South Africa is looking somewhat brighter. Patients will receive more extensive treatment, and all pregnant HIV-positive women will receive antiretrovirals at 14 weeks. Zuma also urged South Africans to get tested for HIV, and to live responsibly.