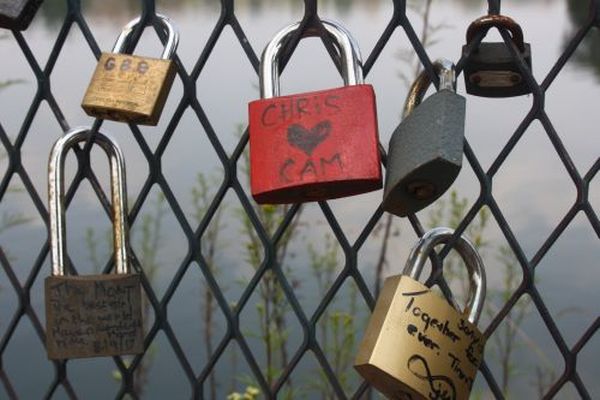 Johannesburg’s lovers are locking their souls together on the bridge overlooking Emmarentia Dam. (Image: Sulaiman Philip)1

Emmarentia Dam in Johannesburg is best known as the home of canoeing in the city of gold, and the Johannesburg Botanical Gardens on its banks.

However, the bridge along the dam wall is slowly becoming the scene of a different love story. Over the last six months, padlocks have been discreetly attached to its railings. You notice them as you walk or drive over the bridge: one at first, a shiny brass lock; further on there is another, then another, clustered together close to the park entrance. Most are simply covered with a pair of initials, many in the bold scrawl of teenagers. The locks celebrate the earnestness of first love.

The tradition of attaching locks to a bridge as testament of undying love has been around for quite some time – since before the Second World War at least – and now, it seems, the ritual has arrived in South Africa. If South African Antonys and Cleopatras follow tradition, they attach the lock to the bridge together before flinging the key into the waters below. This marks the unbreakable bond of their undying love.

If the relationship sours or dies, tradition goes, you are meant to dive into the water to find the key. But the locks creeping across the bridge in Emmarentia celebrate transformational love, pulse-bursting, sweep-us-off-our-feet, turn-your-life-around love. 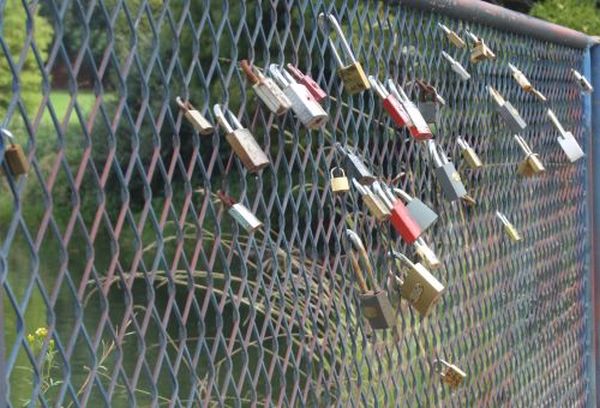 Love struck Joburgers are clipping locks to the railings in a gesture of everlasting infatuation. (Image: Sulaiman Philip)

This tradition may be new in the rainbow nation, but some residents have found a very South African way to use it. Morningside in Durban is a racially mixed community of middle class families. The president’s official residence in Durban, Dr John L Dube House, is in the leafy suburb of Edwardian and Victorian homes.

In July 2013, to celebrate his birthday while he lay ailing in hospital, the people of Morningside began attaching locks to a fence to show their love for Nelson Mandela. Patrick Coetzee of the Dreambuilders Institute, the NGO that began the programme, explained at the time that it was an opportunity for people to “symbolically celebrate the positive difference Madiba has made to South Africa and the world”.

In Europe, the romantic tradition can be traced back to the town of Vrnjačka Banja in Serbia. The story goes that the Most Ljubavi Bridge, known as the Bridge of Love, was the meeting place for local school teacher, Nada, and her lover, a Serbian officer named Relja. When Relja went off to fight in Greece, Nada promised to wait for him. But he fell in love with a Greek woman, broke off his engagement and never returned to Serbia. Heartbroken, Nada died never having loved again.

In her memory, the young women of Vrnjačka Banja began writing their names and the names of the men they loved on padlocks and attaching them to the railings of the Bridge of Love. The tradition was mostly confined to that bridge until Italian author Federico Moccia appropriated the tradition for his books Tre Metri Sopra il Cielo (Three Metres Above Heaven) and Ho Voglia di te (I Want You).

In his home country, the most famous spot for lovers to bind love locks is along the path connecting the coastal towns of Manarola and Riomaggiore. The legend that has grown up is that the pathway was once the favourite meeting place for lovers from the towns. Today tourists flock to the area to place locks on the railings of the pedestrian bridge carved into the cliffs. They then toss the keys into the sea below. Over the last decade, the tradition has grown and love locks are now seen in cities across the globe. 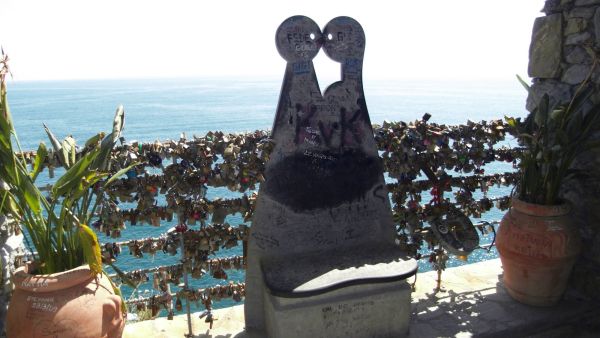 The superstitious say that the only way to break the love sealed by a padlock is to do to do so with a key (Image: Eurosplorin‘)

The Yellow Mountains in China, the Chinese claim, is the birthplace of Love Locking. Here, the sea of clouds and romantic atmosphere of “China’s loveliest mountain”, Lotus Peak, has inspired poets and painters for centuries. A local legend tells of the beautiful daughter of a successful merchant who fell in love with a poor man. But she was to marry a man chosen by her father. On her wedding day, the young lovers fled and died together when they threw themselves off the mountain. The spot has been marked by memorials ever since, and today lovers attach padlocks to the railings on Lotus Peak and throw the keys off the mountain to celebrate their undying love.

Couples looking to escape the noise and crowds of Seoul head to Mount Namsam, in South Korea, and have used the North Seoul Tower to swear eternal devotion. A sign in front of the thousands of locks reads: “A Promise for Endless Love ‘I Love You.'”

Puntan dos Amantes (Two Lovers Point), in Tumon Bay on the Pacific Ocean island of Guam, is incredibly remote but it, too, has its legend of an ill-fated love that ended tragically on the cliffs. At the point where the forbidden lovers are said to have died there is a fence decorated with padlocks. You can even buy heart-shaped locks from vendors if you have forgotten to bring your own.

Across the world, in Montevideo, Uruguay, the fountain on Avenida 18 de Julio has attracted lovers young and old. A plaque at the fountain reads: “The legend of this young fountain tells us that if a lock with the initials of two people in love is placed in it, they will return together to the fountain and their love will be forever locked.”

In Paris, the city of love, where romance is part of the city’s very existence, the bridges over the Seine have become magnets to lovers eager to swear undying love. For Parisians, however, this ritual of the world’s Romeos and Juliets has become an annoyance rather than a celebration. The fussy French complain that the padlocks are ruining the architectural and aesthetic integrity of their bridges. And as a Parisian waiter told The New York Times in 2012: “The fools! They haven’t understood a thing about love, have they?”

In his book In Praise of Love, contemporary French philosopher Alain Badiou reminds his audience that love is about constantly risking your heart. It is vulnerable and fragile. It is, as the French believe, about wishing your beloved freedom. And then you have the chance of retaining their endless love. “The idea that you can lock two people’s love once and for all, and toss the key, is a puerile fantasy.”

But then, Badiou has spent his life trying to recreate his first love, the one on which he gave up. “I tried to recover that initial love, late, very late but with a unique intensity and feeling of necessity. There have been dramas and heart-wrenching and doubts, but I have never again abandoned a love.”