Braai Day patron Archbishop Emeritus
Desmond Tutu and Jan Scannell, the
founder of the Braai Day initiative, during
the 2009 event. 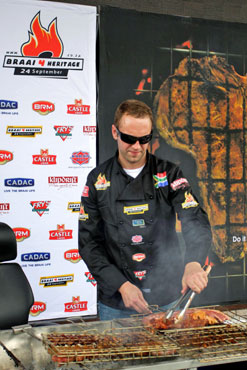 South Africans are hauling out their firewood and readying their tongs for the sixth annual National Braai Day, a lip-smacking occasion on 24 September 2010 that coincides with Heritage Day.

The braai (Afrikaans, meaning barbeque) is an institution in South Africa and cuts across all colours, creeds and culture. This makes it the ideal unifier to be celebrated in context of the country’s diversity of food, language, music and craft.

Archbishop Emeritus Desmond Tutu is the patron of this fiery initiative, which was introduced in 2005 by braai devotee Jan Scannell, also known as Jan Braai on his campaign website, Braai4Heritage.

“I call on all of us to braai for Heritage Day,” Tutu said at a Braai4Heritage promotion on 20 August. “Let’s get together and enjoy ourselves, with friends, families and even those who are not friends.”

The Nobel Peace laureate said the fireside was a traditional gathering place in Africa and that anything, from meat to vegetables, could be put on a braai.

“The important thing is that all of us get together on one day and just enjoy being South African,” he said.

The 78-year-old Tutu, known affectionately as the Arch, will officially retire from public life in October, but will remain the braai patron – a position he took up in 2007.

“You can resign from an office job, but you can never resign from being a braaier,” Scannell told him at the August event.

This year’s holiday is particularly special in light of Scannell’s recent achievement of breaking the world record for the longest braai. The meaty record was previously held by Germany, for a 28-hour, 26-minute barbeque session.

After smashing this by four minutes on 17 September, Scannell said he was delighted that the record was now in its rightful home, “where it belongs”.

Some 2 000 pieces of Rooikrantz wood – an alien tree, therefore suitable for burning,which makes a good fire – were bought for the non-stop mega braai, which was held at Cape Town’s V&A Waterfront between 9am on Thursday and 1.30pm on Friday afternoon.

It had to comply with some pretty stringent Guinness World Record guidelines, including the requirement of at least five different types of meat on the grid at all times, and all of it had to be eaten.

Just to be on the safe side, Scannell kept six variations going throughout – not difficult as South Africans are ingenious when it comes to meat on the coals.

According to the V&A management, the braaied meat could not be given away – “so we had to sell it at a nominal price”, he said, adding that the funds raised went to the JAG Sports and Education Foundation.

When South Africans braai, like at this historic event, the nation is able to “get together, burn the past and cook up a succulent future”, Scannell writes on his website.